The above video presents a collection of vintage newsreels from the Russian State Documentary Film & Photo Archive at Krasnogorsk (RGAKFD), which show Emperor Nicholas II with the Imperial Russian Navy as he reviews the squadrons, talks to the Russian sailors, officers and admirals, and participates in the other naval events.

The Chief of Staff of the guards troops and Petersburg military district Lieutenant General Baron A.P. von den Brinken wrote about Nicholas II’s affection for the navy and sailors: “The Tsar, always so kind and gentle, at anyone’s attempt to say something negative against the navy becomes literally furious, thumps his fist on the table, and stops listening”.

Formally established in 1696 under Emperor Peter I, the Imperial Russian Navy served as the navy of the Russian Empire. It was expanded in the second half of the 18th century and by the early part of the 19th century, it reached its peak strength, behind only the British and French fleets in terms of size.

The navy then went into a period of decline in the first half of the 19th century, due to Russia’s slow technical and economic development. It had a revival in the latter part of the century during the reign of Emperor Nicholas II (1894-1917), but lost most of its Pacific Fleet along with the Baltic Fleet, both of which were sent to the Far East and subsequently destroyed in the disastrous Russo-Japanese of 1904. The second phase of Nicholas II’s military life was marked by his participation in the reorganization of the navy after the catastrophic Russo-Japanese War.

The Imperial Russian Navy had mixed experiences during the First World War, with Germany generally gaining the upper hand in the Baltic Sea, while Russia established its absolute dominance on the Black Sea. The February Revolution of 1917 marked the end of the Imperial Russian Navy; its officers had mostly aligned with the Tsar, and the sailors split to fight on either side. The surviving ships were taken over by the Soviet Navy when it was established in 1918 after the Revolution. 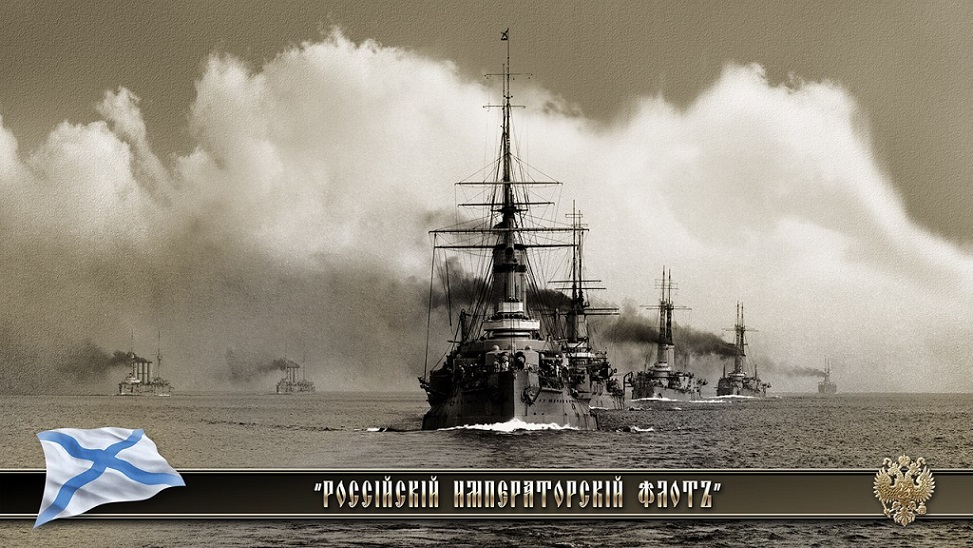 Ships of the Russian Imperial Fleet

During the reign of Emperor Nicholas II the Imperial Russian Navy continued to expand in the later part of the century, regaining its position as the third largest fleet in the world after Britain and France. The expansion was notably accelerated under Nicholas II who had been influenced by the American naval theoretician Alfred Thayer Mahan. Russian industry, although growing in capacity, was not able to meet the demands of the burgeoning Imperial Navy and some ships were ordered from Britain, France, Germany, USA, and Denmark. French naval architects in particular had a considerable influence on Russian designs.

At the end of the Russo-Japanese War in 1905, Russia had fallen from being the third greatest naval power to sixth place. It was then that the focus of Russian naval activities shifted back from the Far East to the Baltic. The task of the Baltic Fleet was to defend the Baltic Sea and St Petersburg from Imperial Germany.

On 19 March 1906, by decree of Emperor Nicholas II, the Maritime General Staff was organized with the Main Naval Staff, which assumed the functions of the operational body of the Imperial Navy. At first, attention was directed to the creation of mine-laying and a submarine fleet. In the same year, a new program for naval shipbuilding, the Russian Armed Forces Development and Reform Program, known as the “Small Shipbuilding Program”, which was approved by Emperor Nicholas II on June 6, 1907, began to be developed and actively discussed, but later the amount of appropriations was reduced, and the program itself was renamed the “Distribution of allocations for shipbuilding” (before 1911 it was planned to finish the ships already started for the Baltic Fleet – 4 battleships and 3 submarines, as well as a new naval base, and for the Black Sea Fleet – 14 destroyers and 3 submarines) and was partially approved by the State Duma in the spring of 1908.

The Bosnian Crisis in 1909 again raised the issue of the expansion of the fleet and new battleships , cruisers, and destroyers were ordered for the Baltic Fleet. It is worth noting that, on the personal orders of Emperor Nicholas II, new battleships were laid, which had previously rejected by the State Duma.

A worsening of relations with Turkey meant that new ships including the Imperatritsa Mariya-class battleships were also ordered for the Black Sea Fleet. The total Russian naval expenditure from 1906-1913 was $519 million, in fifth place behind Britain, Germany, the United States and France.

From 1909, active preparation and discussion of a new shipbuilding program took place. The “Ten Year Shipbuilding Program (1910-1920)” – the so-called “Great Shipbuilding Program”, which in its final version envisaged the construction for the Baltic Fleet: 8 battleships, 4-linear cruisers, 18 destroyers and 12 submarines; for the Black Sea Fleet – 9 Novik type destroyers and 6 submarines; ships for the Pacific Fleet, as well as the rearmament and modernization of several battleships – Tri Sviatitelia, Dvenadsat Apostolov, and Georgii Pobedonosets. The program was approved on March 25, 1910 by Emperor Nicholas II, but was not reviewed by the State Duma until 1911.

PHOTO: the white and blue ensign or Andreyevsky flag, and
the red, blue and white naval jack of the Imperial Russian Navy

The re-armament program included a significant element of foreign participation with several ships (including the cruiser Rurik) and machinery ordered from foreign firms. After the outbreak of World War I, ships and equipment being built in Germany were confiscated. Equipment from Britain was slow in reaching Russia or was diverted to the Western Allies’ own war effort.

By March 1918, the Russian Revolution and the Treaty of Brest-Litovsk made the Germans masters of the Baltic Sea and German fleets transferred troops to support newly independent Finland and to occupy much of Russia, halting only when defeated in the West. The Russians evacuated the Baltic Fleet from Helsinki and Reval to Kronstadt during the Ice Cruise of the Baltic Fleet in March 1918.

The Black Sea was the domain of the Russians and the Ottoman Empire but it was here that the Imperial Russian Navy established its absolute dominance. It possessed a large fleet based in Sevastopol and it was led by two skilled commanders: Admiral Eberhart (1856-1919) and Admiral Kolchak (1874-1920) (who took over in 1916).

After Admiral Kolchak took command (August 1916), the Imperial Russian fleet mined the exit from the Bosporus, preventing nearly all Ottoman ships from entering the Black Sea. Later that year, the naval approaches to Varna were also mined. The greatest loss suffered by the Russian Black Sea fleet was the destruction of the modern dreadnought Imperatritsa Mariya, which blew up in port on 7 October 1916, just one year after it was commissioned. The sinking of the Imperatritsa Mariya was never fully explained; it could have been sabotage or a terrible accident.

The Revolution and subsequent civil war devastated the Russian Navy. Only the Baltic fleet based at Petrograd remained largely intact, although it was attacked by the British Royal Navy in 1919. Foreign Interventionists occupied the Pacific, Black Sea and Arctic coasts. Most of the surviving Black Sea Fleet warships, with crews loyal to the White Russian movement, became part of Wrangel’s fleet under the control of commander Pyotr Nikolayevich Wrangel (1878-1928) and after evacuating White forces and civilians from the Crimea were eventually interned in Bizerta, Tunisia. Russian sailors fought on both sides in this bloody conflict. The sailors of the Baltic fleet rebelled against harsh treatment by the Soviet authorities in the Kronstadt Rebellion of 1921.

The surviving ships formed the core of the Soviet Navy on its 1918 establishment, though the remnants of Wrangel’s fleet never returned to Russia.