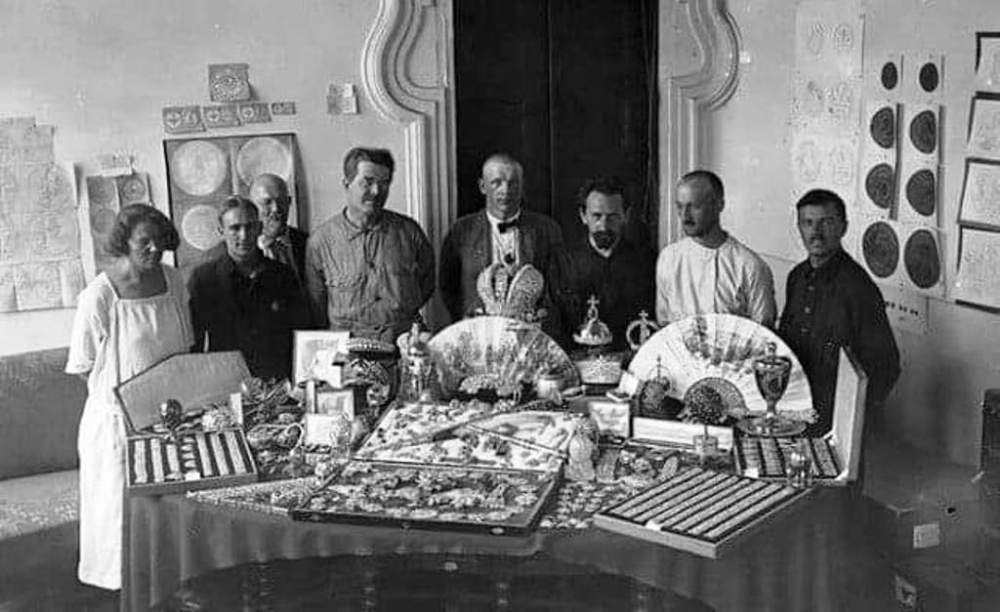 PHOTO: the Russian Crown Jewels, confiscated by the Bolsheviks

There is no greater example of such a large-scale and criminal sale in history, than that of the jewels of the Russian Imperial Court – perhaps, the finest collection in the world. The Bolsheviks inherited an impressive legacy, and wasted little time in profiting from the sale of many pieces to eager buyers in the West during the 1920s.

Interesting testimonies have survived to this day about how the jewels were sorted and catalogued, and how the fate of these historically important treasures was determined. They are today preserved in the RGASPI (Russian State Archive of Social and Political History) in Moscow. 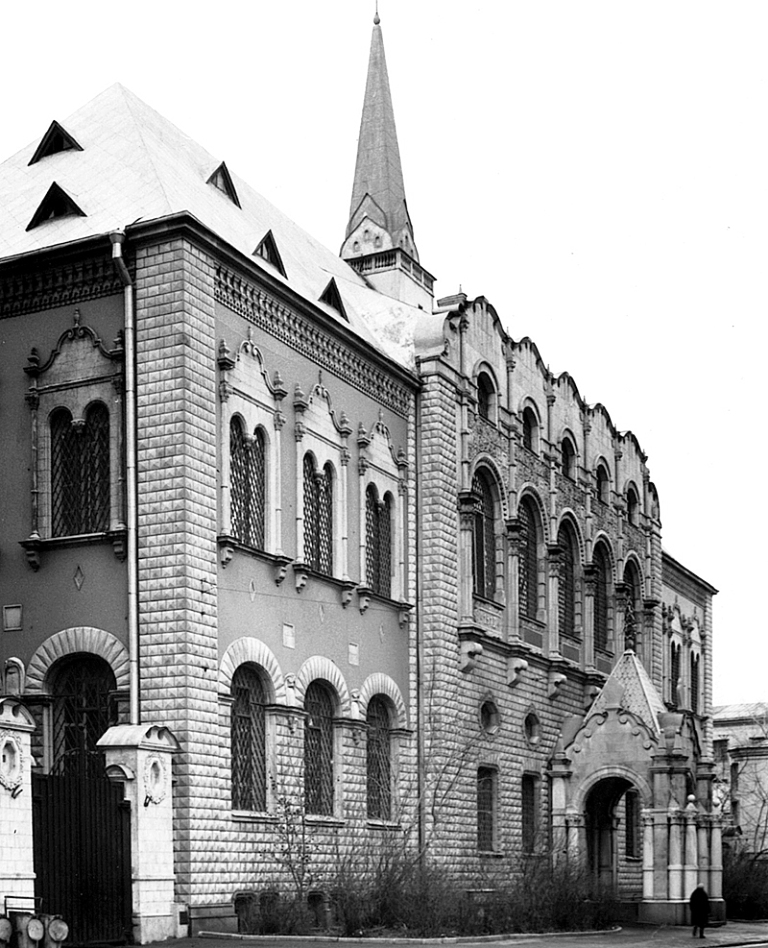 PHOTO: early 20th century view of the Gokhran building in Nastasinsky Lane in Moscow. Gokhran was created in 1920, in the first post-revolutionary years, the Gokhran collected jewels from the Romanovs, the Armoury, the Russian Orthodox Church, as well as valuables confiscated from private individuals. Many of these items were sold abroad.

The Bolsheviks made their first attempt to sell the Romanov jewels in May 1918. Then, in New York, customs officers detained two visitors with jewels (worth 350 thousand rubles) that belonged to Grand Duchess Olga Alexandrovna (1882-1960), the youngest daughter of Emperor Alexander III.

The following year, the founding congress of the Third Communist International was held in Moscow. From that time, the agents of the Communist International (Comintern) regularly exported gold jewellery and precious stones from Moscow. At first, there was practically no control over the agents, so many items were stolen rather than helping to “finance a world revolution”.

In order to stop this “lawlessness”, in February 1920, “Gokhran was created to centralize, store and account for all values ​​confiscated by the RSFSR, consisting of gold, platinum, silver bullion, diamonds, coloured precious stones and pearls”. The famine that began in the summer of 1921 forced the Bolsheviks to look for funds to buy bread. In addition, Poland had to be paid off. According to the Riga Peace Treaty of 1921, the western lands of Ukraine and Belarus were withdrawn to Poland, in addition to this, the Bolsheviks pledged to pay Poland 30 million gold rubles within a year.

Here they remembered the crown jewels that were kept in the basements of the Armoury (they were brought here from Petrograd at the beginning of the First World War, without inventories, and in 1917 jewels from the “Imperial palaces” were added). Crown values ​​were forbidden to give, change or sell by the decree of Peter I, issued in 1719. For almost 200 years, the Imperial Treasury was only replenished. Needless to say, the Bolsheviks ignored the autocrat’s Imperial decrees. The Politburo of the Central Committee of the CPSU outlined a program for the implementation of the so-called “Romanov Jewels”. At first, the Bolsheviks only planned to sell the treasure, but in the end they decided to sell the jewels abroad for hard currency. Before the sale, the treasures had to be sorted and evaluated. Gokhran, however, lacked the specialists to carry out such a task. Back in 1921, after thefts were discovered, three appraisers were shot, while many were imprisoned. Therefore, the Deputy People’s Commissar for Finance Krasnoshchekov in Petrograd reached an agreement with former experts and jewellers from Faberge: Franz, Kotler, Maseev, Mekhov, Utkin, and Bock. They started to work for Gokhran, and began to sort and evaluate the Romanovs jewels. 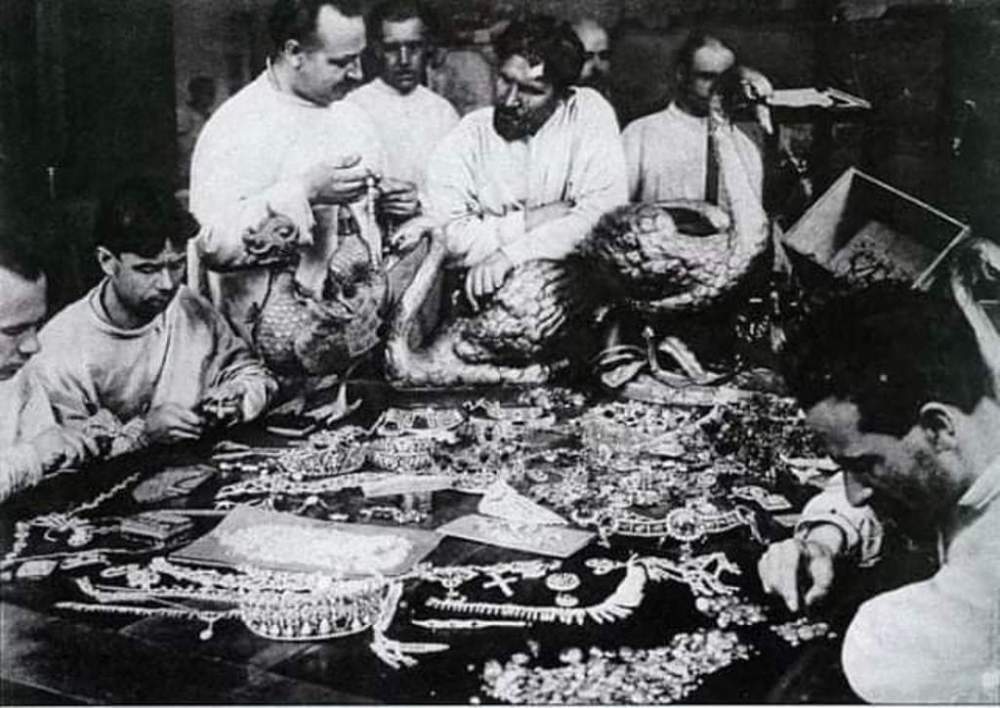 PHOTO: appraisers sort and catalogue the Romanov jewels and other items

The boxes of the “former tsarina”

On 8th March 1922, boxes marked with the “property of the “former tsarina” (the Dowager Empress Maria Feodorovna) were opened in the Armoury Chamber of the Moscow Kremlin. Two commissions were in charge of jewels: the first in the Armoury was responsible for sorting and creating an inventory; while the second sorted and evaluated them at Gokhran.

“In warm fur coats with raised collars, we walked through the frozen rooms of the Armoury,” later recalled a member of the commission, Academician Fersman. – “They brought boxes, there were five of them, among them a heavy iron chest, tied, with large wax seals. Everything was whole. An experienced locksmith easily, without a key, opened an unpretentious, very bad lock. Inside there were jewels of the former Russian Court, each one hastily wrapped in tissue paper. With our hands freezing from the cold, we took out one sparkling gem after another. There were no inventories found among the jewels.”

The following day, Kotler and Franz (both “serious jewellers,” according to Trotsky), said that “if there was a buyer for these valuables, then the estimate would be 458,700,000 gold rubles”. And this, in addition to the coronation treasures, which lay in two separate boxes and were estimated “at more than 7 million gold rubles.” The jewels were examined hastily, within an hour and a half, without a detailed determination of the quality of the stones. The Bolsheviks questioned how much the gems would sell for if they were sold as a separate commodity (they feared a scandal in Europe that could arise in connection with the sale of the crown jewels), experts estimated the amount of 162 million 625 thousand gold rubles.

The members of the commission were amazed. Truly beautiful jewels that belonged to the House of the Romanovs … For example, a diamond necklace with a sapphire cost 3 million rubles, diamond pendants 5 million. The amounts are impressive. Especially when you consider how much these treasures are worth now. For instance, the Faberge “Lilies of the Valley” Easter Egg, which in 1898 Nicholas II presented to his wife Alexandra Feodorovna, cost 6,700 rubles. A little more than a century later, it sold for $10-12 million USD at Sotheby’s, acquired by Viktor Vekselberg and now on display at the Faberge Museum in St. Petersburg.

As a result of such an optimistic assessment, the treasures were quickly (note, again without making inventories) from the Armoury to the Gokhran building in Nastasinsky Lane in Moscow. In the boxes from the palace of Dowager Empress Maria Feodorovna, in addition to the empress’s jewels, rare works of jewellery were kept. Only a few of these items later ended up in Soviet museums, while the rest were sold cheaply to foreigners …

PHOTO: the Imperial Crown of Russia can be seen on the table among 2 Faberge eggs

By mid-May, the sorting and appraisal of the crown jewels of the Empresses Maria Feodorovna and Alexandra Feodorovna in Gokhran had been completed. The items of the “former House of Romanov” were divided into three categories, taking into account, first of all, the value of the stones, the artistry of the work and the historical significance of the item. The first category – the inviolable fund – included 366 items valued at 654,935,000 rubles, of which the coronation regalia decorated with selected diamonds and pearls was valued at 375 million rubles. As reported to Leon Trotsky, Deputy Special Commissioner of the Council of People’s Commissars (Council of People’s Commissars) for the registration and concentration of the values ​​Georgy Bazilevich wrote, “when selling these items abroad, the receipt of 300,000,000 rubles is guaranteed.” Products of the second category, which had historical and artistic value, were estimated at 7,382,200 rubles.

At the end of his work, Deputy Chairman of the Council of People’s Commissars and the Council of Labor and Defence Alexei Rykov asked Faberge and Fersman if it was possible to realize coronation values ​​in the foreign market. They answered: it is possible, although there should be no rush. But the Bolsheviks were in a hurry to sell these pieces for the much coveted foreign currency they hoped to gain from such a sale.

In 1922, emeralds from Gokhran were sold in London and Amsterdam under the guise of those mined in the Urals. A year later, Gokhran pearls and diamonds were brought to Amsterdam. In the years following, the Bolsheviks continued to quietly sell diamonds and pearls from Gokhran in Paris.

As for the debt to the Poles, they decided to repay it with jewels. Bazilevich sent Trotsky a memo marked “Top Secret”, which provides a brief estimate of the value of the former “House of Romanov and valuables handed to Poland under the Riga Treaty”:

“In the preparation of of the Bolshevik debt to be paid to Poland the finest diamonds, pearls and coloured stones were selected. In addition to the stones, Gokhran selected gold items, including chains, rings, cigarette cases, bags, etc. in the amount of 2.728.589 rubles … “. 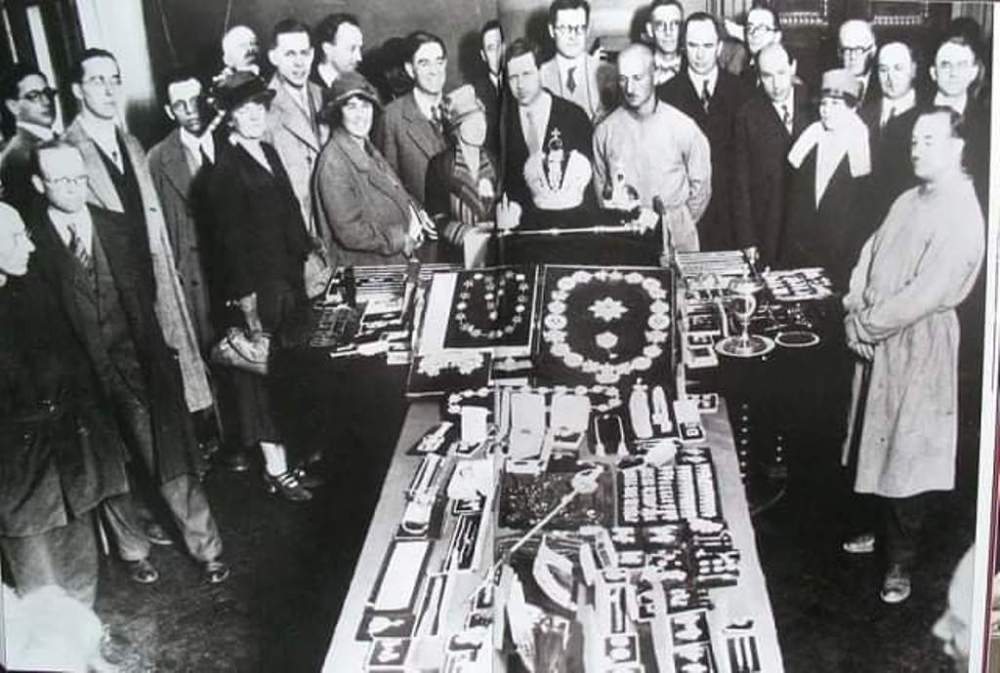 PHOTO: the Romanov jewels on display in Moscow, 1920s

The apogee of the work of the Gokhran experts was the appearance in 1925-1926 of four issues of the illustrated catalogue “The Diamond Fund of the USSR”. The publication was translated into English, French and German in order to attract foreign buyers and was distributed in Europe.

As a result, “art connoisseur” Norman Weiss was not long in coming. He purchased items from the Diamond Fund in bulk, weighing 9.644 kilograms. The masterpieces of Russian jewellery art cost him 50 thousand pounds! In 1927, the resourceful merchant held an auction in London “Jewels of the Russian State”. The imperial wedding crown, a diamond diadem, and the jewels of Empress Catherine II “floated away” from him.

While the crown jewels were being sold in London, the head of the Armoury Chamber Dmitry Ivanov (he also participated in the cataloguing of the Romanov jewels in 1922) begged the officials to return the museum items sold by Gokhran. His efforts, however, were in vain. At the beginning of 1930, Ivanov became aware of the upcoming seizures of items from Russian museums to be sold abroad. Ivanov could no longer tolerate the theft and sale of Russia’s treasures, and ended up committing suicide.

In 1932, the Romanov treasures bought by Armand Hammer could be purchased at American department stores. Later, he opened an antique shop, which sold Easter eggs that belonged to the empresses, icons in jewelled frames of Nicholas II and Alexandra Feodorovna, a Fabergé cigarette case commissioned by Maria Feodorovna, her notebook embossed with her monogram and an Imperial crown, among many other items.

Of the 773 items of the Diamond Fund, 569 were sold in the 1920s – 1930s. These Romanov treasures were stolen from the Russian Imperial Family by the Bolsheviks, and bought up by greedy, materialistic buyers in the West. It is hardly possible to find in history an example of such a large-scale and criminal sale.

Further reading: I highly recommend History’s Greatest Heist: The Looting of Russia by the Bolsheviks by Sean McMeekin. Published by Yale University Press in 2009

Click HERE or on the photo above, to order your copy of RUSSIA’S TREASURE OF DIAMONDS AND PRECIOUS STONES, available from AMAZON in hard cover and paperback editions