Pre-revolutionary view of the Feodorovsky Sovereign Cathedral in Tsarskoye Selo

For most visitors to Russia, a visit to Tsarskoye Selo (today known as Pushkin), includes the Catherine Palace and the nearby Alexander Palace. Sadly, they overlook some of the other buildings which reflect the era of Tsar Nicholas II. Among these are the Feodorovsky Gorodok (Town), which also includes the magnificent Feodorovsky Sovereign Cathedral, the Martial Chamber, the former barracks of His Imperial Majesty’s Own Convoy, and the ruins of the Tsar’s Railway Pavilion.

In the course of two centuries every Russian monarch, beginning with Peter I, strove to make his or her contribution to the improvement of the royal summer residence in Tsarskoye Selo (Tsar’s Village) near St. Petersburg. The last Russian emperor Nicholas II, who chose the Alexander Palace for his permanent residence in 1905, decided to embellish the town with buildings reflecting the Russian national style. The Feodorovsky Sovereign Cathedral and the adjacent residential area called Feodorovsky Gorodok (Town), complete with tent roofs and towers were built between 1909-1917, with Nicholas II, his wife and their children directly involved in the project. The construction was nearing completion when the First World War began, followed by the revolutionary cataclysms which engulfed the Russian Empire. Following the October 1917 Revolution the Cathedral was closed down in 1933, while the adjacent gorodok was turned into an educational branch of the Agrarian Institute. 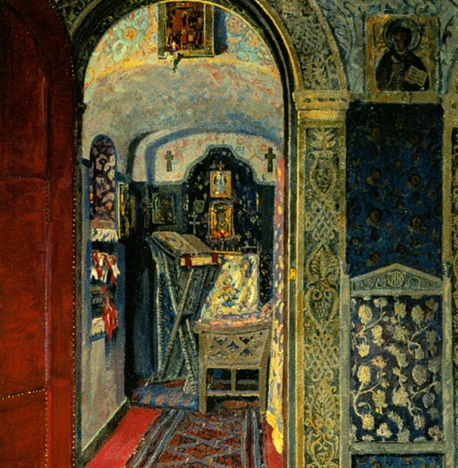 Chapel of the Empress Alexandra Feodorovna in the Lower Church of the Fodorovsky Cathedral. Artist: L.A. Syrnev

The history of these buildings, which resemble the fairytale Kitezh-town, is closely associated with the last tsar, whose tragic death, along with his wife and children in Ekaterinburg, continues to stir the interest and curiosity of people in Russia and around the world to this day. This short essay tells the story of a “little spot of the Russian land” created in Tsarskoye Selo. It is illustrated with vintage photographs and reproductions of paintings by artists who worked on them at the time of the construction of the complex.

During the 1910s the artists G. Gorelov, L. Syrnev and M. Kirsanov painted a series of colour pictures depicting views of the Feodorovsky Sovereign Cathedral and the Feodorovsky Gorodok. They reproduced the entire architectural ensemble the way it was perceived by the last Russian emperor. Some of the paintings were published in the book Feodorovsky Gosudorov Sobor, published in 1915. The views of the Feodorovsky Gorodok reflect events of the First World War, when an infirmary for the wounded soldiers was opened in the gorodok. Pictures on canvas are wounded soldiers with bandaged legs and arms who were undergoing medical treatment in the infirmary and the nurses who cared for them. The artists strove to render the image of Old Russia, too. The artists captured the beauty of the Feodorovsky Sovereign Cathedral, particularly the interiors, each of which evoke a deep religious feeling. [These paintings are today part of the collection of the Tsarskoye Selo State Museum – PG] 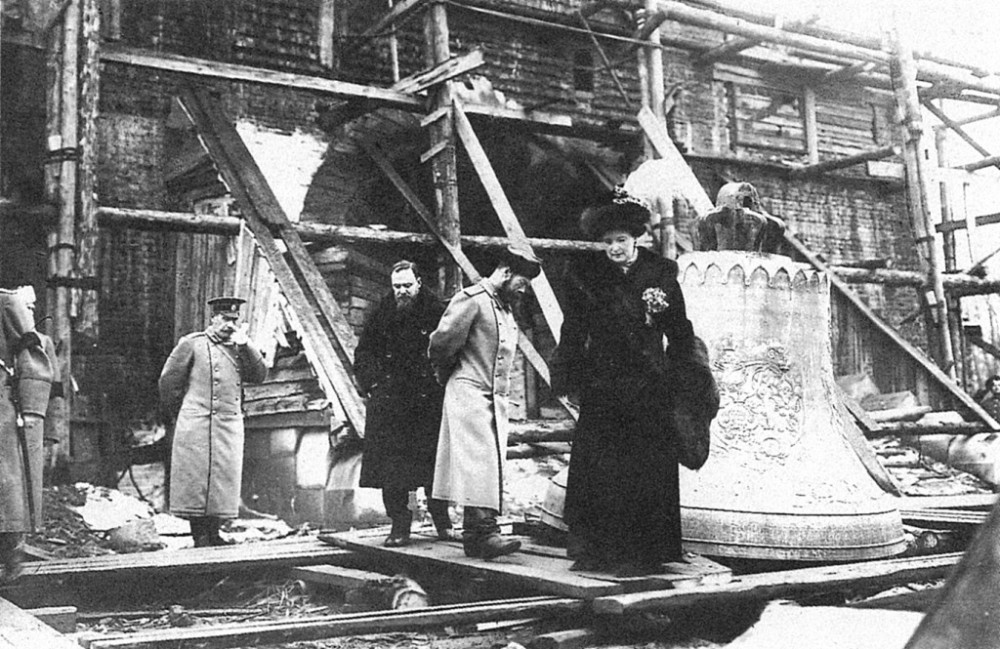 The foundation of the Cathedral was laid on 20 August 1909, in the presence of Emperor Nicholas II and his family. The design was commissioned by V.A. Pokrovsky, a great connoisseur of the Russian national tradition. The construction was financed by the tsar’s family.

The Feodorovskaya icon of Our Lady, patroness of the Romanov dynasty

The Cave Church, situated in the Lower Church

The Feodorovsky Sovereign Cathedral became the house church for Emperor Nicholas II and his family.  The Cathedral consisted of two churches, the upper which included the main altar dedicated to the Feodorovsky Icon of Our Lady and a side-chapel consecrated in honour of the Moscow Metropolitan Alexis, the all-Russia Miracle-Worker. The lower part of the Cathedral housed a Cave Church with the altar consecrated in the name of Saint Serafim of Sarov the Miracle-Worker, and the private chapel of Emperor Nicholas II and Empress Alexandra Feodorovna. The Feodorovskaya icon of Our Lady, the main icon of the Cathedral, is the patroness of the Romanov dynasty. The icon was kept in the upper church. The Cathedral interiors impressed everyone with their decor executed in the style of 17th century church architecture – the favourite style of Nicholas II. The Cave Church decoration was supervised by the architect V. N. Maksimov.

The Cathedral walls are decorated on the outside with large mosaic panels made in St. Petersburg in the studio of the well known mosaic artist V.A. Frlov. 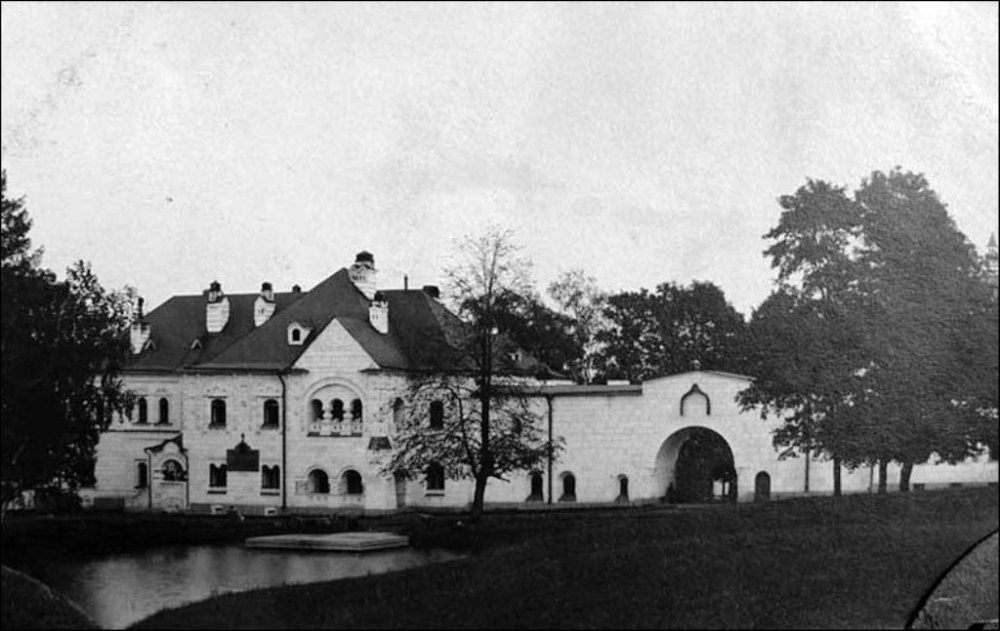 View of the Feodorovsky Gorodok. 1917 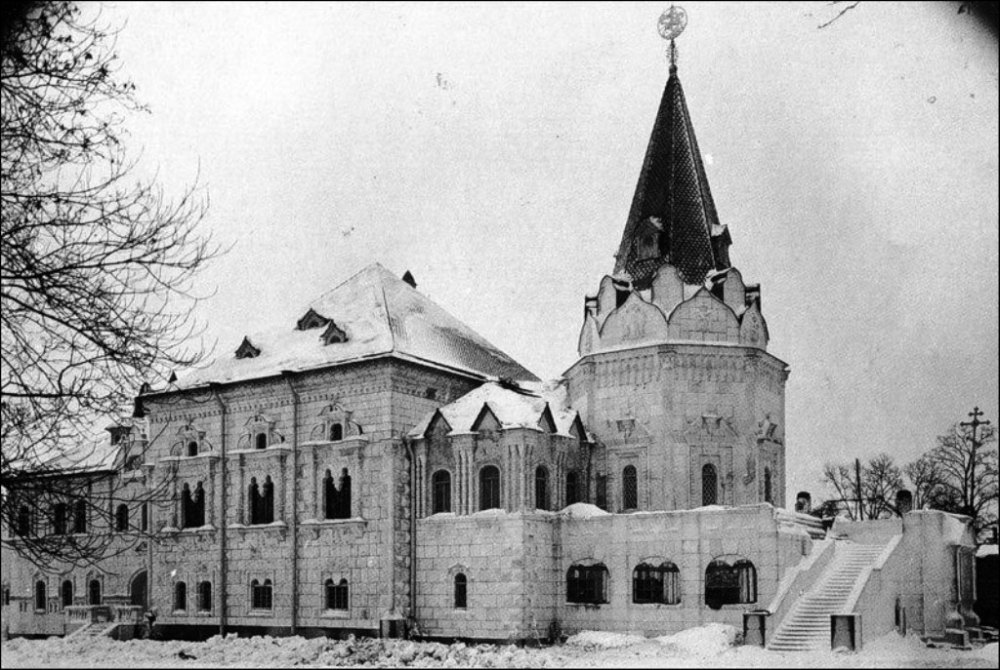 The Feodorovsky Gorodok – a group of buildings erected for the servants of the church – was built during 1913-1917 to the design of S.S. Krichinsky, approved personally by Nicholas II. It is situated on the shore of a small island and surrounded by a fortress wall. One of the towers is decorated by a gilt figure of St. George. The buildings, varying in height and shape and joined by covered passages, occupy an area of 1.7 hectares (4.2 acres). Participating in the design of the gorodok were the architects A. Pomerantsev, V. Maksimov, and L. Shchusev. 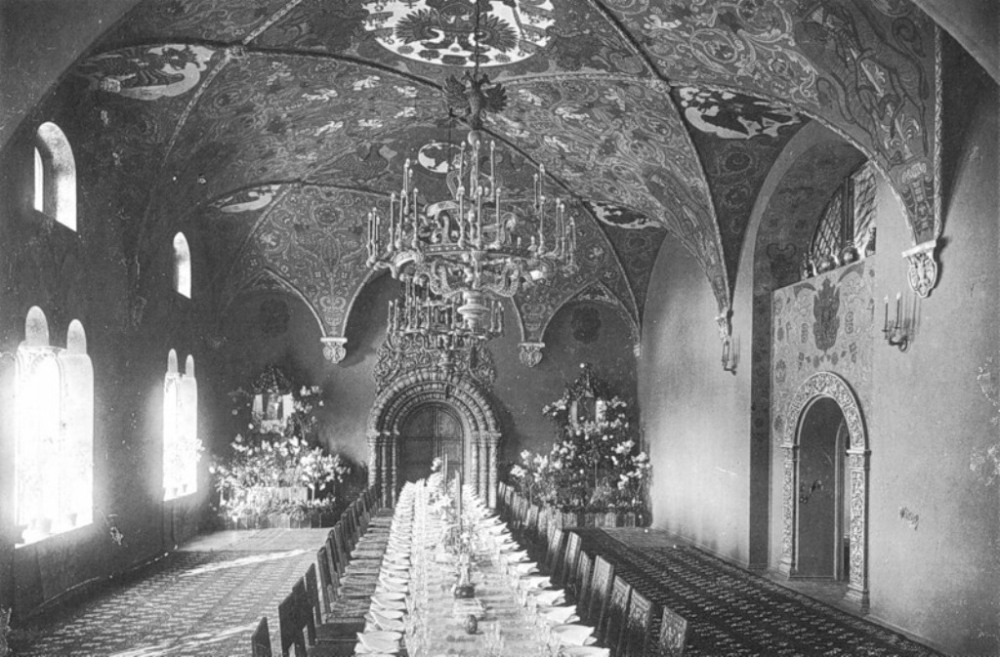 Interior of the Refectory, Feodorovsky Gorodok

The Officer’s Assembly dated 1911 (demolished after the war)

Nearby in Kuzminskaya Street were the barracks of His Imperial Majesty’s Own Convoy (designed by V.N. Maksimov, 1906) and the brick building of the Officer’s Assembly dated 1911 (demolished after the war). There were a number of military barracks and stables designed and built in the Russian Style. The year 1915 marked the construction of wooden barracks for the Special Aviation Detachment. In December the same year, barracks were built for His Majesty’s Own Railway Regiment. Designed by the architect V.N. Maksimov, these barracks were situated close to the Tsar’s Railway Pavilion which was built to the design of design of V.A. Pokrovsky in 1912 in the Neo-Russian Style. The station building completed the new architectural ensemble.

Former barracks of His Imperial Majesty’s Own Convoy

The Tsar was insistent that the newly erected buildings should resemble Old Russia by their appearance. Had all the projects conceived been realized and all the buildings survived intact, they would have formed a unique single ensemble in Tsarskoye Selo which would fill the environment of the Alexander Palace with a historic atmosphere Nicholas II desired following the whims of his fantasy.

Of all the numerous buildings in traditional Russian style erected in Tsarskoye Selo at the will of Nicholas II those surviving unchanged are the Feodorovsky Gorodok (currently under restoration) and the Martial Chamber (now the Museum of the History of the First World War).

The architectural complex of buildings near the Feodorovsky Cathedral, which came into being as a result of the Sovereign’s artistic fantasies, reflected both the artistic search of Russian architects in the early 20th century and search for spiritual ideals of the time. 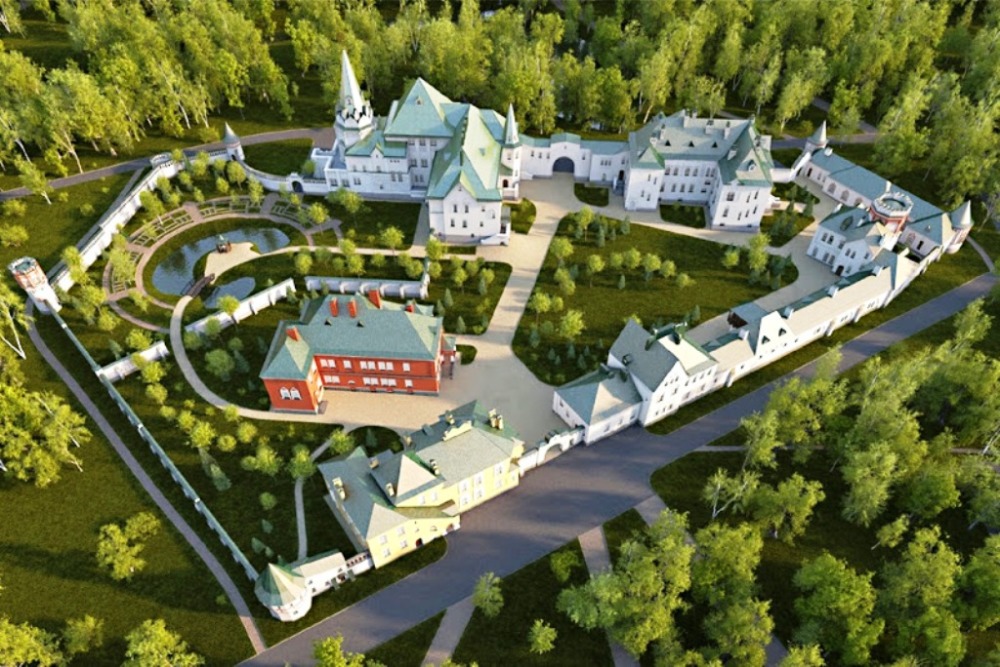 Artist concept of the Feodorovsky Gorodok after restoration

In 1913-1917 the Martial Chamber complex was built to the design of the architect S. Yu. Sidorchuk. At the start of the war against Germany in 1914 it was decided to open a portrait gallery of the holders of the St. George Cross in the Chamber building. In 1918 the Martial Chamber and the Feodorovsky Gorodok fell under the jurisdiction of the Agronomical (later Petersburg Agrarian) University. The art collections were divided among various museums in Leningrad. The buildings, damaged during World War II, are now under restoration (with the exception of the Tsar’s Railway Pavilion, which is currently in a terrible state of neglect and disrepair). Although this will work will take some years, several newly restored buildings of the Feodorovsky Gorodok have already become part of the Patriarchal residence of the Russian Orthodox Church. 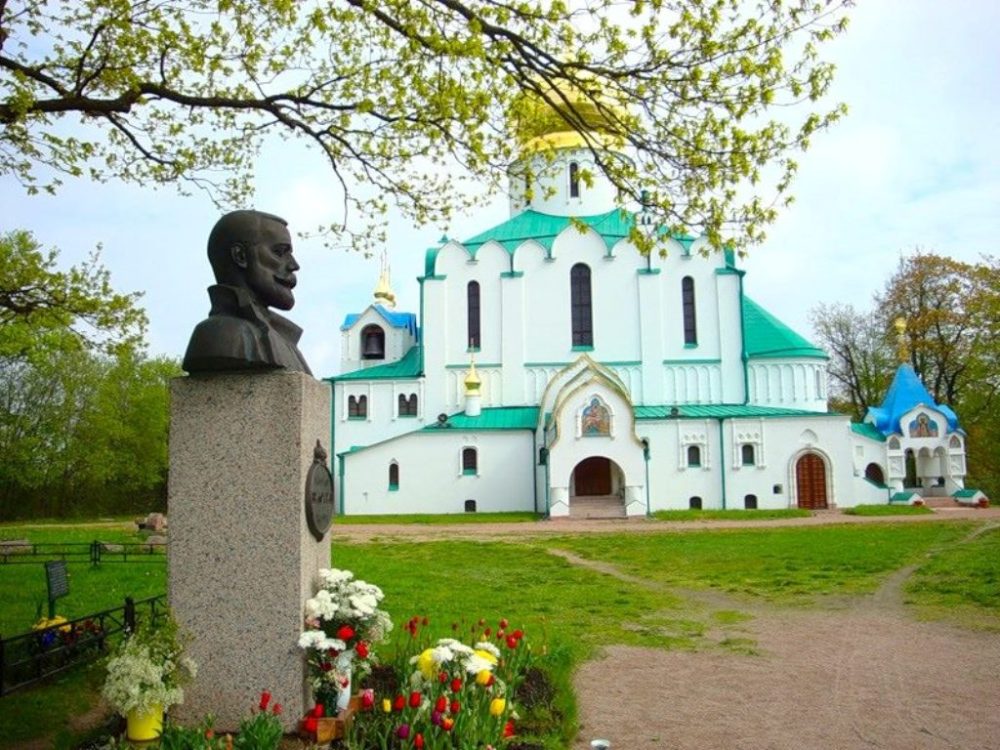 Feodorovsky Sovereign Cathedral as it looks today. Russia’s first monument to
Nicholas II by the sculptor V.V. Zaiko, was established in the garden in 1993 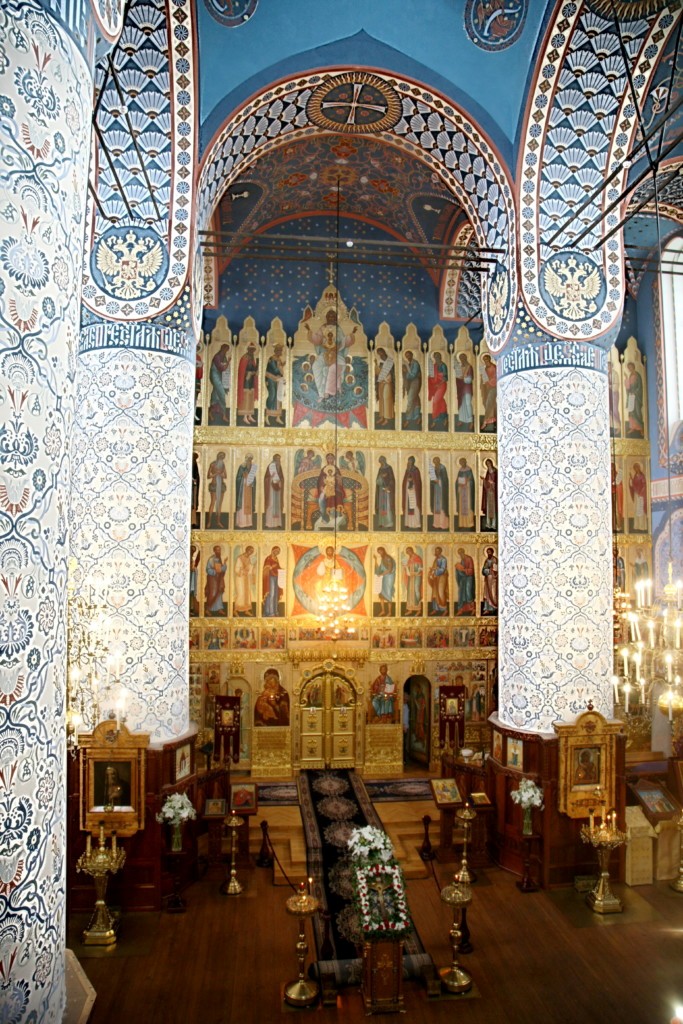 In 1991 the Feodorovsky Sovereign Cathedral opened its doors to believers again. The entire complex of buildings closely connected with the Russian Orthodox Church and with the life of the last Russian Emperor has been taken in tutelage by the Moscow Patriarchate. It allocates funds for the restoration work. The Feodorovsky Sovereign Cathedral was reconsecrated on 29 February 1992. Regular liturgies are carried out in the Cave Church. Divine Liturgies are conducted in memory of the murdered Emperor Nicholas II, Empress Alexandra Feodorovna, Grand Duchesses Olga, Tatiana, Maria, Anastasia Nikolaevna, and Tsesarevich Alexei Nikolaevich. The last tsar is commemorated with a bronze bust established on the grounds of the Cathedral in 1993, by the Russian scukptor V.V. Zaiko.