CLICK on the IMAGE above to watch VIDEO (in Russian ONLY). Duration: 13 minutes

The Tobolsk Historical and Architectural Museum-Reserve have created a 13-minute video tour of the Museum of the Family of Emperor Nicholas II.

NOTE: this video is in Russian only, there is no English version. If you do not speak Russian, please do not allow this to deter you from watching this video. For those of you who will never have an opportunity to visit Tobolsk, this video is the next best thing, as it affords a virtual tour of the interiors of this very important museum, one which reflects the final years of Nicholas II and his family – PG

This virtual tour of the museum is presented in Russian by historian and writer Peter Valentinovich Multatuli, who was born in Leningrad on 17 November 1969. Multatuli is considered by many as Russia’s leading authority on the life and reign of Emperor Nicholas II.

He is the great-grandson of Ivan Mikhailovich Kharitonov (1872-1918), who served as the Head Cook of the Imperial family. He followed the tsar and his family into exile, and was murdered along with them in the Ipatiev House on 17th July 1918.

Multatuli takes viewers on a virtual tour of the former Governor’s House in Tobolsk, where Nicholas II, his family and entourage of those who followed the Imperial family into exile lived under house arrest from August 1917 to April 1918. Each room features unique exhibits from their daily life complemented with Multatuli’s vast knowledge of Russia last emperor and tsar.

NOTE: the large white circle located in the upper left hand corner of the video has 4 arrows, which allow you to move the camera to view the entire room and their respective displays – PG

The Museum of the Family of Emperor Nicholas II opened on 26th April 2018, in the former Governor’s Mansion in Tobolsk 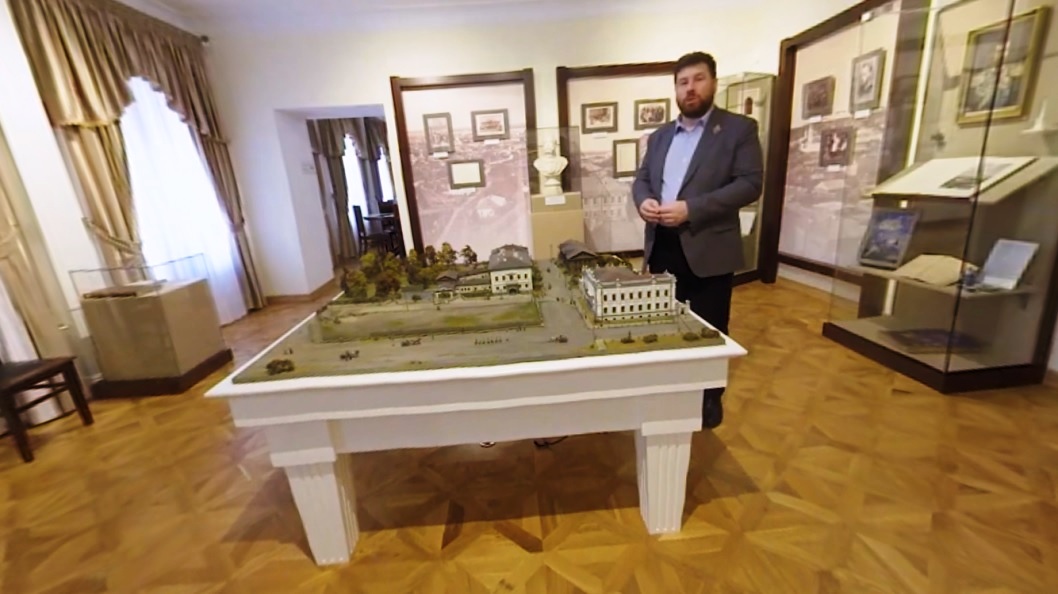 PHOTO: Peter Multatuli in the Museum of the Family of Emperor Nicholas II, Tobolsk

Upon arrival the Imperial family had to live for several days on the steamer Rus, waiting for the renovation of the “House of Freedom” – the former governor’s mansion – to be completed. They moved into the house on 24th August (O.S. 11th August).

Within a few days of their moving in, part of the square in front of the house was fenced off with a tall wooden fence, allowing for the family to take in fresh air and exercise. Some of the guards and those who accompanied the Imperial family into exile from Tsarskoye Selo were settled in the Kornilov house on the opposite side of the street.

In the beginning, the Imperial family were allowed to walk to the nearby Church of the Annunciation for worship, however, this was halted due to “concerns for their safety”. Despite this, the security regime in Tobolsk was more relaxed than in Tsarskoye Selo, allowing the family to lead a fairly calm life.

The Imperial family were housed in the former governor’s house until April, 1918, when they were transferred to Ekaterinburg, and subsequently murdered by the Ural Soviet on 17th July 1918. 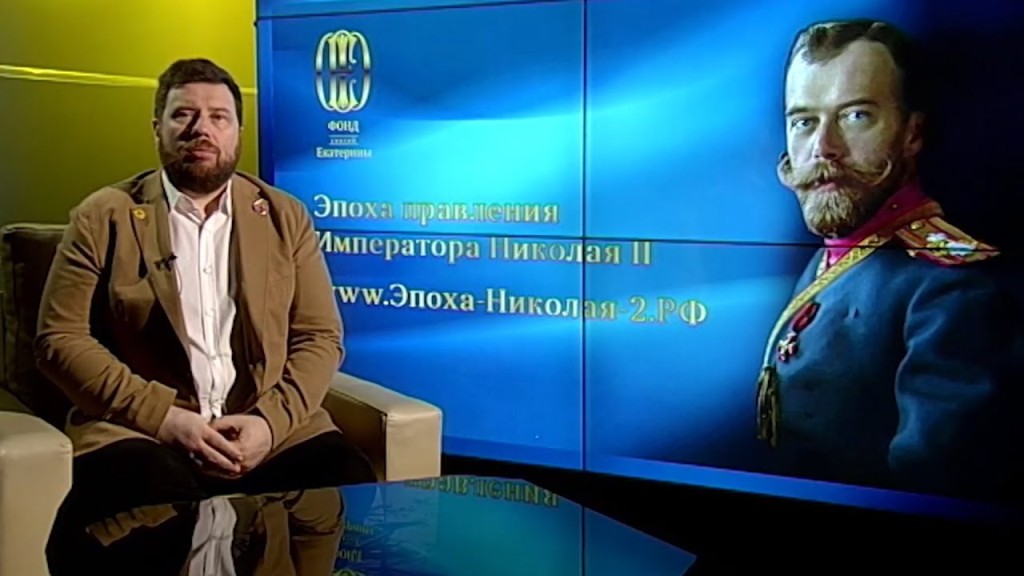 In recent years there has been much confusion by non-Orthodox Christians and Westerners with regard to the correct dates of important events (births, deaths, marriages, etc.) among members of the Russian Imperial Family, according to the New Style calendar.

For instance, the anniversary of the birth of Nicholas II has been widely marked on the 18th of May in the Gregorian (New Style) calendar. This, however, is incorrect, it is in fact the 19th of May, an error which many historians (myself included) are guilty.

The Gregorian calendar was implemented in Russia on the 14th of February 1918 pursuant to a decree signed on 24th January 1918 (Julian) by Bolshevik leader Vladimir Lenin. Despite this, the Russian Orthodox Church continues to use the Julian Calendar.

Russia’s highly respected and prominent authority on the life and reign of Russia’s last emperor and tsar, Peter Valentinovich Multatuli reminds us of the true dates of the history of Russia and its Tsars!

“The birthday of Sovereign Emperor Nicholas Alexandrovich should be celebrated on 19th May,” says Multatuli, “not the 18th as many English language books and websites note.” Further, he adds: “and the day of Nicholas II’s accession to the throne is on 2nd November. If the correct dates in the New Style are not followed, then these and other historical events are distorted.”

“Everyone knows that Emperor Nicholas II was born on St. Job of the Long Suffering. The church celebrates this day on 6th May, according to the Julian calendar. In the Gregorian calendar in the 19th century. this number corresponded to 18th May, but in the 20th and 21st centuries. this date falls on 19th May. Celebrating the birthday of the Emperor on 18th May, is not the day we celebrate the birth of St. Job! This is a sin!”

“The same is true with the death of Alexander III and accession to the throne of Nicholas II. This happened on the day of Saint Artemius the Great Martyr and the righteous youth Artemiy, on 20th October (2nd November). And if this day is celebrated on 1st November or 3, then we are not commemorating the memory of these saints. Do not reply on any dates on Wikipedia which often provide the incorrect dates of the Gregorian calendar for the 19th century.” 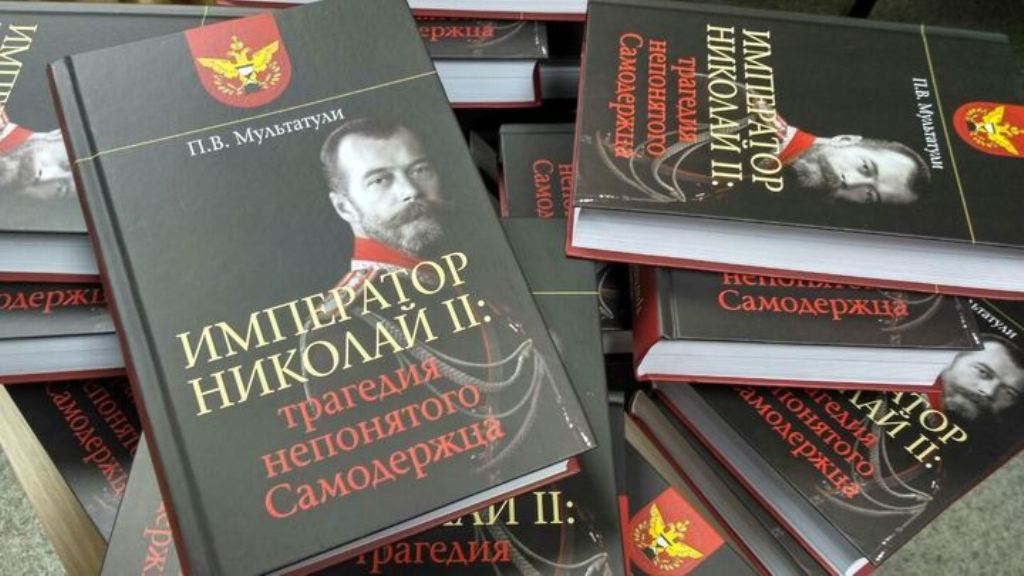 Peter Valentinovich Multatuli was born in Leningrad on 17 November 1969. He is a Russian journalist, historian and biographer. Multatuli is the author of numerous books and articles about the reign of Emperor Nicholas II.

He is the great-grandson of Ivan Kharitonov (1872-1918), who served as the Head Cook of the Imperial family. He followed the tsar and his family into exile, and was murdered along with them in the Ipatiev House on 17th July 1918.

VIDEO of the entire Forum (in Russian only) – duration 2 hours, 20 minutes

On 18th May 2018, on the eve of the 150th anniversary of the birth of the last Russian emperor, a public forum was held in Ekaterinburg to preserve the heritage of Tsar Nicholas II.

Scientists, historians and authors, along with representatives of the public, gathered to discuss the urgent issues of preserving the historical memory of the sovereign, including recognizing the merit of Nicholas II for the development of the Russian state and an assessment of the murder of the Tsar’s family committed a hundred years ago. 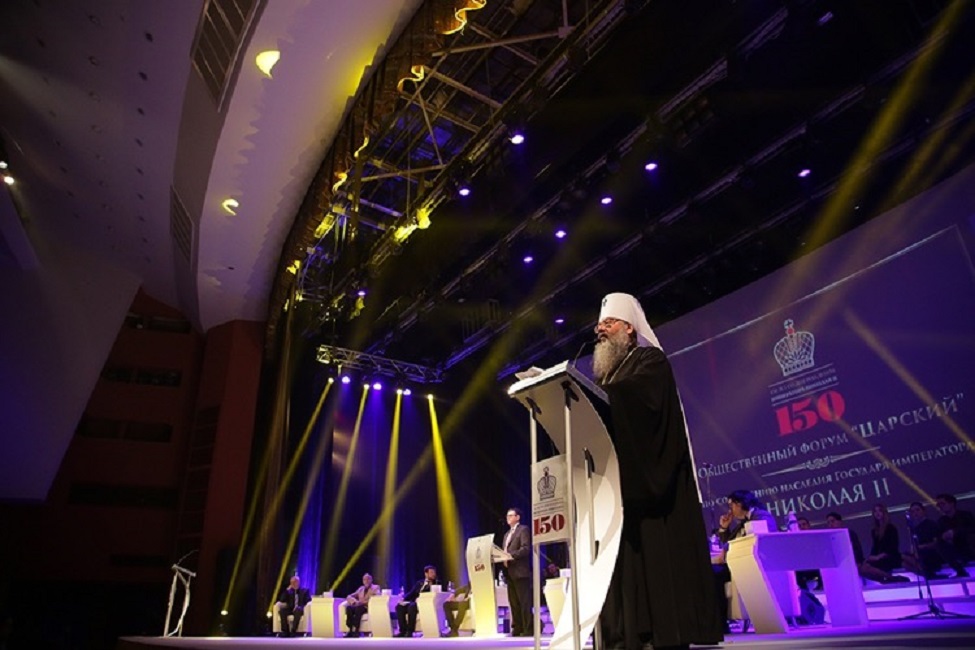 Metropolitan Kirill of Ekaterinburg and Verkhoturye

Opening the forum was Metropolitan Kirill of Ekaterinburg and Verkhoturye, who noted that Ekaterinburg “has become a symbol of the tragedy of the Tsar’s family and, together with her, our Motherland.”

“Since these tragic events, which took place 100 years ago, tragedy befell Russia and it’s people. It is here, on the 150th anniversary of the birth of Emperor Nicholas Alexandrovich, that our holy cause is to gather and reflect on what the Russian Empire was during his reign, what was good about our great country, and what should we take from the past, what lessons, what edifications should we learn for our own lives” – said His Eminence.

The special guest of the forum – the Chairman of the Double-Headed Eagle Society the media group Tsargrad Konstantin Valerievich Malofeev, noted “the triumph of the reign of Emperor Nicholas II, is unparalleled in the thousand-year history of Russia.

“During the history of the Russian Empire, it was the most powerful, the largest, the happiest during the reign of Nicholas II. We should not forget this, and our forum is dedicated to this, which we, the society of historical enlightenment Double-Headed Eagle Society, proudly hold together with the Ekaterinburg Metropolis where our local branch is working under the guidance of Metropolitan Kirill.” 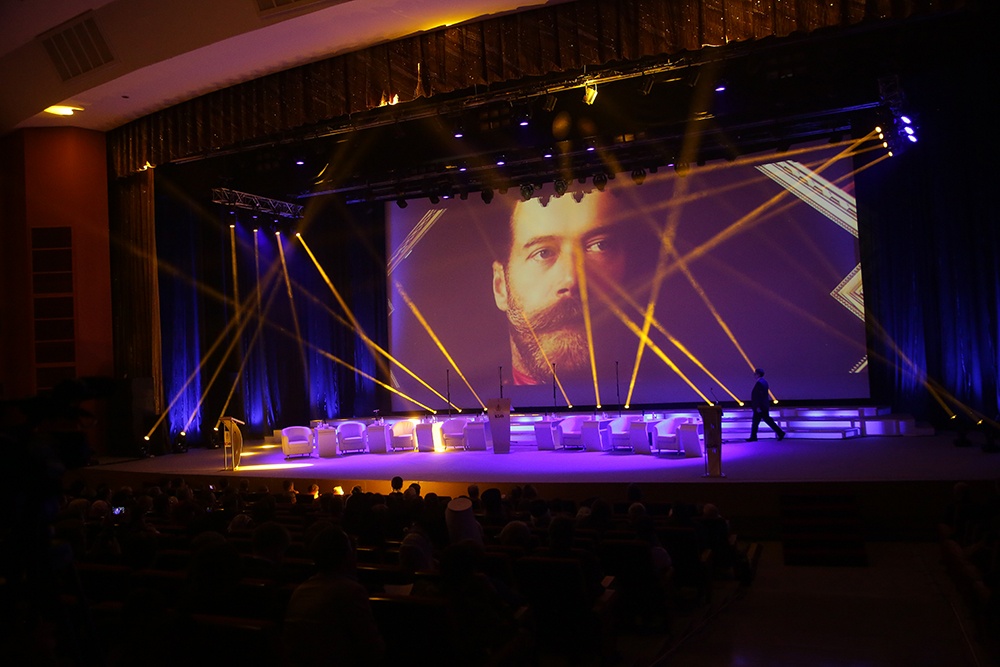 The stage is set for the Nicholas II Forum, held at the Cosmos Theater, Ekaterinburg

The forum was also attended by Bishop Evgeny of Nizhny Tagil and Nevyansky, Bishop of Serov and Krasnoturinsky Alexy, Minister of Education of the Sverdlovsk Region Yury Biktuganov, First Deputy Minister of Culture of the Sverdlovsk Region Vladimir Manturov, as well as representatives of the Double-Headed Eagle Society, the World Russian People’s Council, the Imperial Palestinian Orthodox Society, arriving from various regions of Russia.

Historians, philosophers, theologians, public figures from Russia (among them also experts from Moscow and St. Petersburg), Serbia and Bulgaria discussed issues related to the restoration and preservation of the historical memory of Nicholas II.

Within the framework of the forum, experts assessed the era of the reign of the last Russian emperor as a time, providing great breakthroughs in the development of the state and creating the foundations of socio-economic, including technological development for decades to come. Experts came to the conclusion that Nicholas II was one of the most effective Russian rulers and issued a number of initiatives to perpetuate the memory of Emperor Nikolai Aleksandrovich as an outstanding statesman. 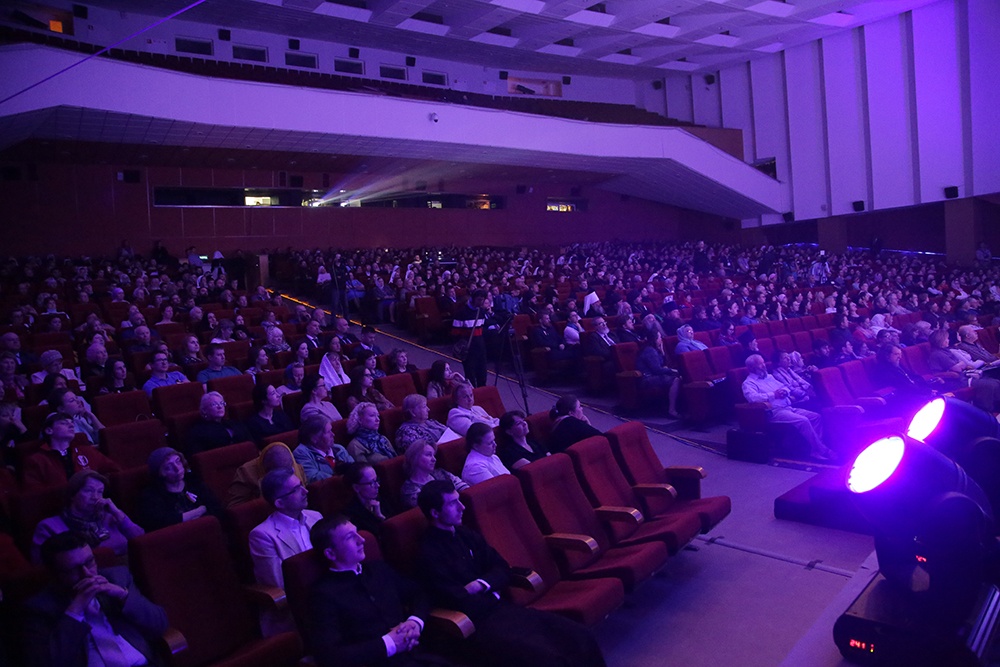 More than 2,000 people attended the Nicholas II Forum on 18th May

Among the proposals included in the final document of the forum is the need for a large-scale federal information and enlightenment campaign on Russia’s achievements in the era of Nicholas II, the development of textbooks and other scientific and educational literature on the basis of reliable scientific information on era, the state order for quality works of art in various fields of culture and art; importance of historical archival research and public dialogue among the scientific community and citizens interested in history; installation in the cities and towns of Russia monuments to the sovereign – an initiative put forward by a member of the Regional Public Chamber, chairman of the Ural branch of the Union of Russian Paratroopers Yevgeny Teterin.

An important topic of the forum was the discussion of the need for public evaluation of the murder of the Imperial Family and their faithful servants, which occurred a century ago in the Ipatiev House in Ekaterinburg. The tragedy of 1918, crowned with the feat of the Holy Royal Passion-Bearers, has not yet been properly evaluated at the state level.

The experts of the forum supported the initiative of Moscow colleagues – participants of a recent round-table hosted by the Parliamentary Newspaper (Парламентская газета) where representatives of the Russian Orthodox Church, State Duma deputies, jurists and political scientists condemned the murder of the Tsar’s family as an unacceptable and unjustifiable crime.

During the forum on May 18, in Ekaterinburg, experts presented their views on the sovereign and the era at the forum by:

– Pyotr Valentinovich Multatuli, Russia’s leading expert on the life and reign of Nicholas II, candidate of historical sciences, member of the Council of the Society for the Development of Russian Historical Education of the Double-Headed Eagle Society, and regular commentator of the television channel “Tsargrad”;

– Konstantin Valerievich Malofeev, chairman of the Society for the Development of Russian Historical Education of the Double-Headed Eagle Society.

– Georgi Dimov, Doctor of Science, Senior Researcher of the Bulgarian Academy of Sciences;

Other participants of the forum were Vladislav Nikolayevich Mayorov, military journalist, expert on the history of Nicholas II and author of the “Royal Calendar”; Vladimir Ilyich Bolshakov, Doctor of Philosophy, Vice-Rector for Research of the Russian Academy of Painting, Sculpture and Architecture Ilya Glazunov (Moscow), as well as members of the Urals Association in Moscow and other experts. 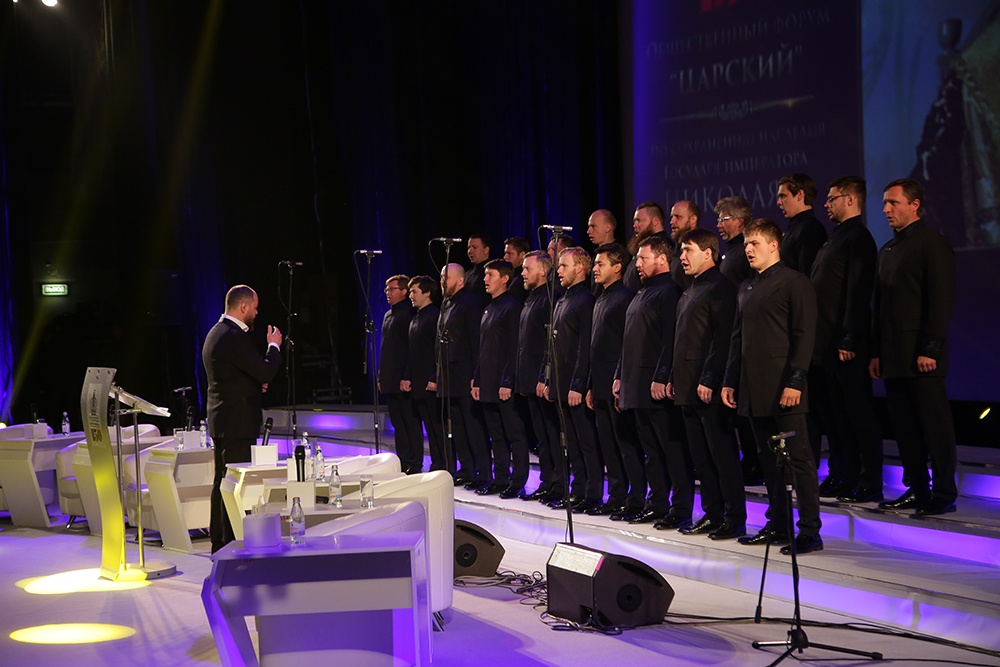 The Forum came to close with the singing of God, Save the Tsar and Glory! and A Life for the Tsar, performed by the Sretensky Monastery Choir – please take a moment to watch/listen at the end of the video posted at the top of this post – PG.

The Forum on the preservation of the historical heritage of the Emperor Nicholas II was held in the Kosmos Theater in Ekaterinburg. More than 2,000 people participated in the historic Forum. The event, which became a significant public event, was covered by the leading federal and regional media and was broadcast by the Orthodox television channel Soyuz to 82 countries with a multi-million audience.