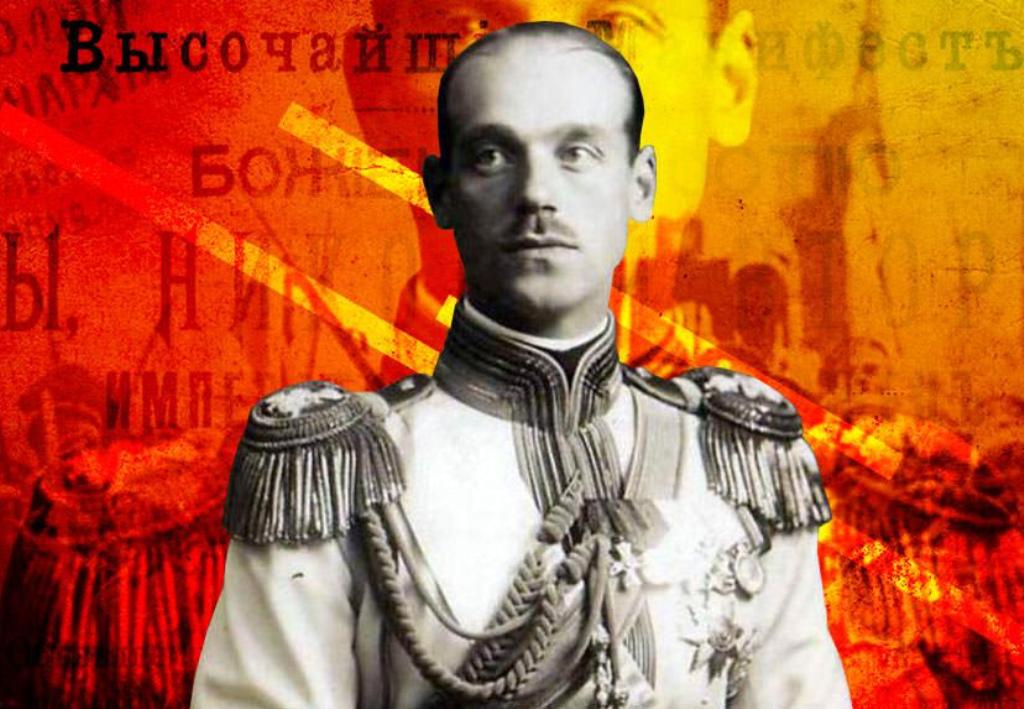 The question of whether Grand Duke Mikhail Alexandrovich (1878-1918) was the last Emperor of Russia, remains a subject of debate among many historians and monarchists to this day.

A heartbeat from the throne

At the time of his birth, his paternal grandfather Alexander II was still the reigning Emperor. Mikhail was fourth-in-line to the throne after his father and elder brothers Nicholas and George. After the assassination of his grandfather in 1881, he became third-in-line and, in 1894, after the death of his father, second-in-line. His brother George died in 1899, leaving Mikhail as heir presumptive. The birth of Nicholas’s son Alexei in 1904 moved Mikhail back to second-in-line.

In 1912, Mikhail shocked Nicholas II by marrying Natalia Sergeyevna Wulfert, a commoner and divorcee. In a series of decrees in December 1912 and January 1913, Nicholas relieved Mikhail of his command, banished him from Russia, froze all his assets in Russia, seized control of his estates and removed him from the Regency.

After the outbreak of World War I, Mikhail returned to Russia, assuming command of a cavalry regiment. When Nicholas abdicated on 15 March [O.S. 2 March] 1917, Mikhail was named as his successor instead of Alexei. Mikhail, however, deferred acceptance of the throne until ratification by an elected assembly. Nicholas was appalled that his brother had “kowtowed to the Constituent Assembly” and called the manifesto “rubbish”.

Mikhail was never confirmed as Emperor and, following the Russian Revolution of 1917, he was imprisoned and subsequently murdered by the Bolsheviks near Perm on 13 June 1918 (aged 39).

Would Mikhail have made a good Tsar?

While many of Nicholas II’s detractors insist that Russia’s last Tsar was unprepared for the throne, his brother Mikhail was even less prepared. Mikhail had no aspirations for the throne, instead he preferred the life a playboy, and his gentle disposition would have made him an easy target for manipulative ministers and generals in helping nurture their own selfish interests.

His letters to his brother the Emperor reveal a rather devious and conniving side of Mikhail. In one such letter dated 7th November 1912, Nicholas writes to his mother:

“What revolts me more than anything else is his reference to poor Alexei’s [the Tsesarevich’s] illness which, he [Mikhail] says, made him speed things up. [Mikhail is referring to his marriage. In the event of Alexei’s death, Mikhail would have become heir to the throne]. And then the disappointment and sorrow it brings to you and all of us and the scandal of it all over Russia mean absolutely nothing to him! At a time, too, when everyone is expecting war, and when the tercentenary of the Romanovs is due in a few months! I am ashamed and deeply grieved.”

Many believe that Mikhail’s ascension to the throne would have ushered in a constitutional monarchy and that this in itself would have preserved the dynasty and saved Russia. Russia, however, was not prepared for a constitutional monarchy, nor would it have preserved the dynasty nor would it have saved Russia. A constitutional monarchy would not have appeased the socialists and revolutionaries, and most certainly driven the radical elements such as the Bolsheviks to extreme measures. It has been argued that Russia should have adopted a European style monarchy. There is little similarity. Holy Russia did not need to adopt a Western style monarchy. For centuries Russia had been led by mystic forces. Monarchy was the social system that fit Russia best.

The legality of Nicholas II’s act of abdication

Some historians further argue that Nicholas II’s act of abdication on 15 March 1917 (O.S. 2 March) 1917 was invalid for two reasons: one, because it was signed in pencil, violating all the necessary legal and procedural methods and format, and thus had no legal force; and two, because the instrument of abdication was never officially published by the Imperial Senate.

In his scholarly book ‘Russia 1917. The February Revolution,’ historian George Katkov, throws yet another interesting coal into the fire:

“ . . . when the Tsar abdicated, and later on behalf of his son, he was accused of having done so in contravention of the law of succession and with the aim of introducing a legal flaw into the instrument of abdication that would later allow him to declare it invalid.”

If this is true, it was a very clever move on the part of Nicholas II, not realizing the terrible fate which awaited him and his family 15 months later in Ekaterinburg.

One thing, however, is certain—Grand Duke Mikhail Alexandrovich was NOT Russia’s last tsar! Nicholas II remained Emperor and Tsar of Russia until the day of his death and martyrdom on 17th July 1918.

As God’s Anointed, Nicholas II could not be displaced during his lifetime. Since the will of God was nowhere manifest, neither in the naming of his brother Grand Duke Mikhail to the throne, nor in the Tsar’s signing of the instrument of abdication, his status as Tsar remained inviolate and unassailable.