In 1911, the famous Russian collector and philanthropist Elena Andreevna Tretyakova (1846-after 1917) presented as a gift to Emperor Nicholas II: her vast collection of paintings, icons, weapons and historical documents which documented Russia’s military history from ancient times. In addition, she donated a significant amount for the construction of the Госуда́рева Ра́тная пала́та [Sovereign Military Chamber] at Tsarskoye Selo. Due to the outbreak of World War I in August 1914, the construction of the war museum was not completed. At the height of the First World War, and in anticipation of impending hard times, Elena Tretyakova wrote: “Probably, if not during my lifetime, then afterwards others will appreciate my idea and work.”

It would be another century before the Sovereign Military [aka Martial] Chamber would become a museum. The building was transferred to the Tsarskoye Selo State Museum-Preserve in 2010. Between 2011-2014. the building underwent restoration, at a cost of 292,000,000 rubles ($8 million USD). The building is now home to the ‘Russia in the Great War’ Museum, which was inaugurated on 4th August 2014 , marking the 100th anniversary of the beginning of World War One. The museum has been visited by more than 120 thousand people.

The Sovereign Military Chamber at Tsarskoye Selo is the first museum in Russia dedicated entirely to Russia’s participation in the First World War. The history of the museum has its roots in the era of Nicholas II. Today, the museum is a rich repository of military uniforms, weapons, and items used in military life, as well as photographs and documents. 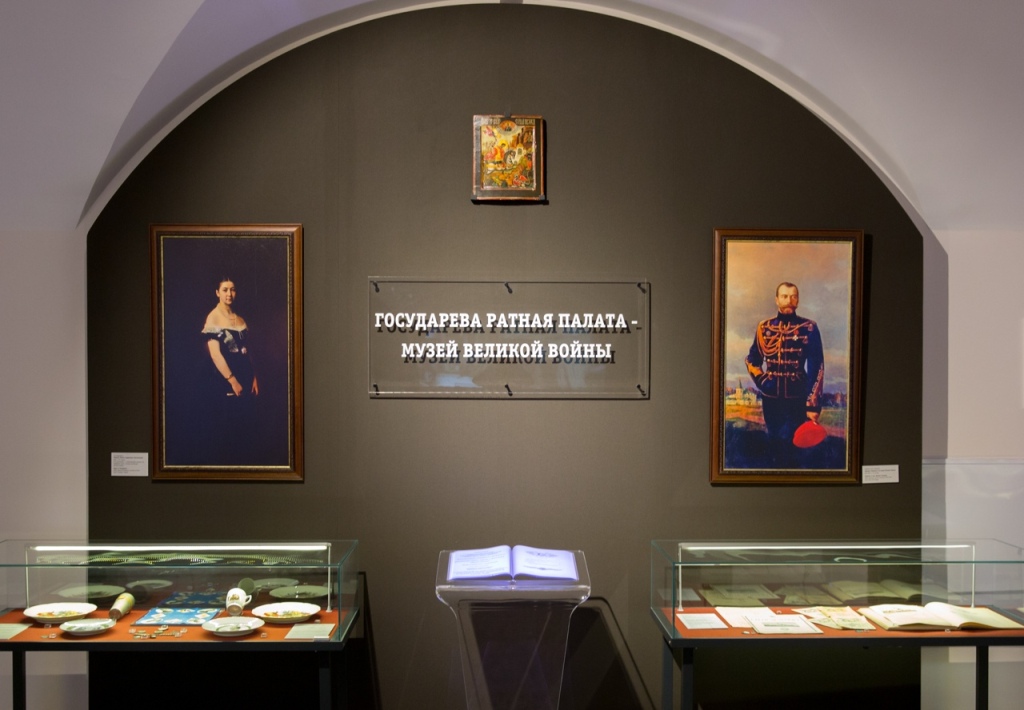 PHOTO: portraits of Elena Tretyakova and Nicholas II in the Sovereign Military Chamber

This year marks the 175th anniversary of the birth of Elena Andreevna Tretyakova (1846-after 1917).

According to her contemporaries, Elena was “educated, and distinguished by her natural beauty, with beautiful curved shoulders, a pale, slightly puffy face, a heavy plait of hair on the back of her head and tiny hands, which she was very proud”. She dressed very luxuriously, ordered dresses from Paris and rented a large summer dacha in Peterhof for the summer. Her neighbour at Peterhof was the Russian pianist, conductor, and composer. Nikolai Grigoryevich Rubinstein (1835-1881), with whom she was in love (he died in her arms in 1881 in Paris). Every day she received guests at her home, where an exquisite choir of gypsies sang, which was then in great fashion. The Tretyakovs’ marriage was childless. After the death of her husband she lived in St. Petersburg. Elena Andreevna Tretyakova died after 1917, the exact date is unknown.