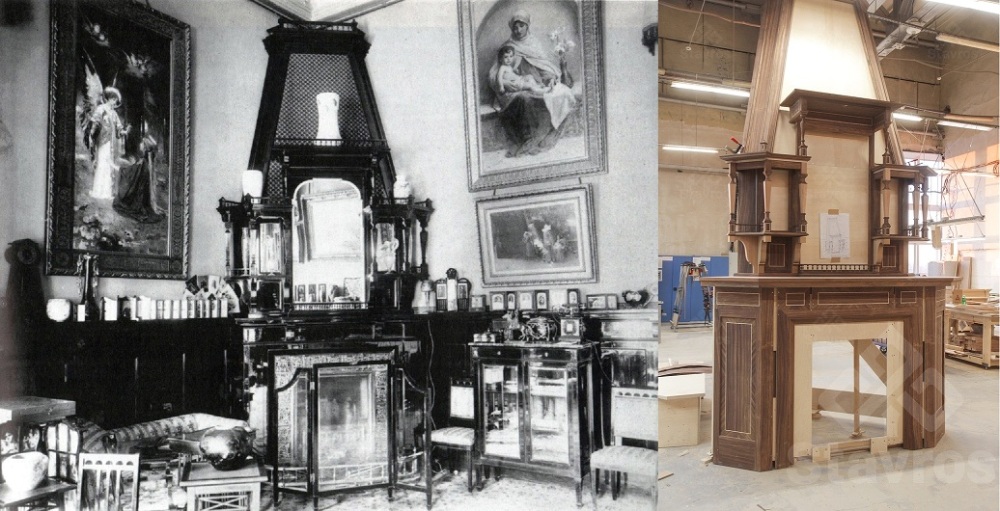 PHOTO: The corner fireplace is being recreated (right) for the Pallisander (Rosewood) Drawing Room (left) in the Alexander Palace. © Stavros

The Imperial Bedroom, the Mauve (Lilac) Boudoir, and the Pallisander (Rosewood) Drawing Rooms of the Alexander Palace in Tsarskoye Selo will soon be furnished with exact replicas of their lost furniture. The work is being carried out by Stavros (St. Petersburg), a firm who manufactures fine wood furniture and interiors.

This project is part of the recreation of the Private Apartments of Emperor Nicholas II and Empress Alexandra Feodorovna, situated in the eastern wing of the Alexander Palace. The total amount for the recreation of furniture for these rooms is currently estimated at 16 million rubles ($240,000 USD).

Not long after the Imperial family were exiled to Siberia in August 1917, a museum was established within the Alexander Palace. It operated until the beginning of the Second World War. At the beginning of the war, the most valuable furnishings were evacuated to the interior of the country. The remaining parts of the collection were hidden in the basement. During the Nazi occupation, the palace was used as headquarters for the German military command, the basement was used as a prison. The area in front of the palace was turned into a cemetery for SS soldiers. Artistically and historically unique collections were partially destroyed. As the Nazi German forces were leaving the Soviet Union, many of the former imperial palaces were set ablaze. The Alexander Palace was spared, however, according to the testimony of the Soviet military leader Anatoly Kuchumov, many interiors were destroyed, and many pieces of their remaining collections stolen by Nazi soldiers.

During the years after the war, as interest in Nicholas II and his family was discouraged by the Soviet regime, so too was interest in the palace that had been their residence.

The Imperial Bedroom (above) was situated between the Dressing Room of Alexandra Feodorovna and the Mauve (Lilac) Boudoir. The walls and furniture were lined with pink English Chintz print. Two vitrines contained jewellery, including the famous Fabergé Imperial Easter eggs. Set in an alcove was the Imperial bed made up of two gilt-bronze twin beds. Behind it were hundreds of icons and religious items hung on cords. To the right of the bed was an icon-stand. Most of the icons and other items, totaling 700, were gifts to the Imperial family from important monasteries, churches, religious organizations, military units and private persons. The room and its furnishings have did not survive the war. 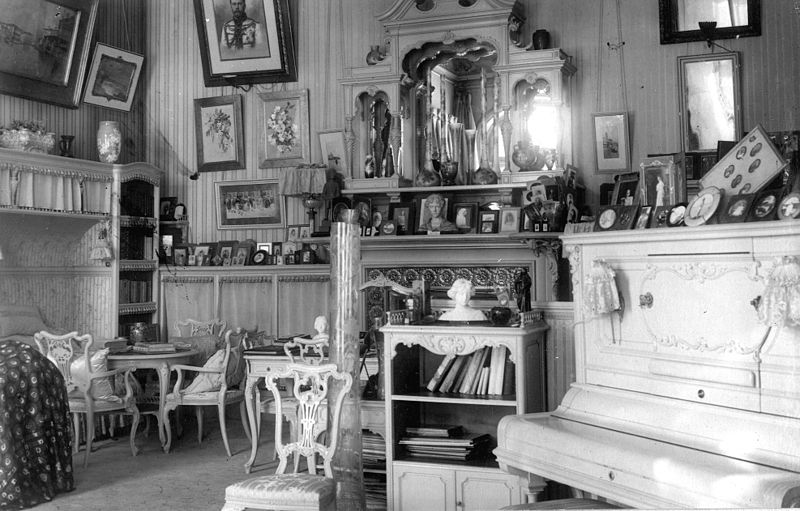 The Mauve (Lilac) Boudoir (above) suffered greatly during the Second World War. It was located in the suite of rooms, between the Imperial Bedroom and the Pallisander (Rosewood) Drawing Room, and did not have a separate exit to the corridor. At one time, the walls were covered with high-quality gorgon lilac silk fabric, with vertical narrow paired stripes, and the lower part was decorated with wooden panels. During the war years, the room was completely burned out, only a few photographs remind us of it’s former luxury.

The Pallisander (Rosewood) Drawing Room (above), was located between the Mauve (Lilac) Boudoir and Maple Drawing Room. Nicholas II called it the “Chippendale Room” because of several furniture pieces made in the Chippendale style, including the fireplace. At the same time, the Pallisander (Rosewood) Drawing Room also served as a dining room, where the Imperial family gathered for afternoon tea. After the occupation, only the doors and the upper part of the fireplace survived, the upholstery of the walls and wall panels disappeared, and the beautiful stucco cover partially collapsed.

The restoration of the Alexander Palace will be carried out in three stages over the next year and a half. Other historic interiors to be recreated include the Library, the Maple Drawing-Room and the Corner Drawing-Room of Alexandra Feodorovna.

In 2000, the New (State) Study of Nicholas II (above) was used by Russian director Gleb Panfilov to shoot a scene for Романовы. Венценосная семья (The Romanovs: An Imperial Family), a film on the last days of Tsar Nicholas II and his family. Reproductions of furniture were made for the film and remain on display in the room to this day.