On 21 [O.S. 9 February] February 1859, one of the leaders of the February Revolution, and a key figure in the events which led to the abdication of Emperor Nicholas II in 1917, the chairman of the State Duma, Mikhail Vladimirovich Rodzianko was born.

In January 1924 attention was focused on the death of Vladimir Lenin in the Soviet Union and in circles of Russian émigrés abroad. While workers and peasants plunged themselves into grief, White Russians in emigration happily rubbed their hands together and wondered how soon the Bolsheviks would fall from power.

Meanwhile, the funeral of another man, one who was among the most recognizable figures of the State Duma for a decade, and in February 1917 became the central figure of the Russian revolution, passed away on 24th January 1924, almost unnoticed in Belgrade.

Mikhail Rodzianko lived during an era of great change in Russia. He came from an old and rich noble family of Ukrainian origin. Mikhail’s father Vladimir Mikhailovich Rodzyanko (1820-1893) was promoted to the position of assistant chief of staff of the Gendarme Corps and retired with the rank of general.

Vladimir’s first wife (from 1852) Maria Pavlovna Vitovtova (1827 – 1859), served as Maid of Honour to Grand Duchess Maria Mikhailovna (1825-1846), and from 1846, Maid of Honour to the Empress Alexandra Feodorovna (wife of the Emperor Nicholas I). She died in 1859, shortly after giving birth to her fourth child and third son Mikhail.

Mikhail was educated at the Corps des Pages in St. Petersburg. From 1877 until 1882 he served in Her Majesty’s Regiment of the Cavalry of the Guard. In 1884 Rodzianko married Anna Nikolaevna Galitzine (1859-1929); the couple had three children. In 1885 he retired and lived on his estate in the Novgorod Oblast. He was appointed as Marshall of the Gentry. Rozianko served as Kammerherr in 1899. In 1900 he was elected in Yekaterinoslav Governorate. From 1903 until 1905 he was editor of a newspaper, called “Herald Katerynoslav zemstvos.” In 1906 he was elected for the Zemstvo as Provincial Zemstvo Executive. 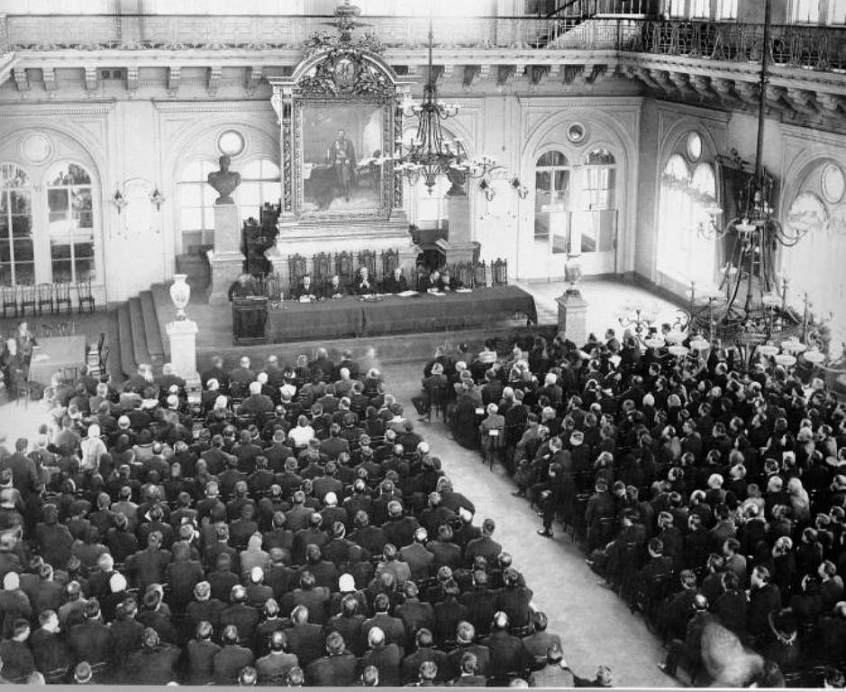 Meeting of the Union of the 17th October Party in the State Duma. 1913.

Settling in his native Yekaterinoslav province, Rodzianko was first elected magistrate, and then became the leader of the nobility of Novomoskovsky district.

From 1901, he became chairman of the Yekaterinoslav provincial district council, and in 1906 a state councilor. In the civil service, this rank was identical to a general in the army, so Mikhail Vladimirovich did not lag behind his brothers Nikolai (1852-1918) and Pavel (1854-1932), author of Tattered Banners: An Autobiography (published in English in 1939).

No one in the Rodzianko family was a supporter of the revolution, but for Mikhail the events of 1905 opened the way to a great political career.

The manifesto of 17 October 1905, which provided political freedoms for the citizens of the Russian Empire, led to the creation of legal political parties, some of which were hostile to both Nicholas II and the monarchy. Rodzianko became one of the founders of the Union of October 17 Party (aka the Octobrists), a moderately liberal party, whose members were firmly committed to a system of constitutional monarchy.

In 1911, Rodzianko replaced party member Alexander Guchkov (1862-1936) as chairman of the Third State Duma. After the elections to the Fourth State Duma in 1912, Rodzianko remained chairman, noting: “I have always been and will remain a staunch supporter of the representative system on constitutional basis, which was granted to Russia by the great Manifesto of 17 October 1905, the strengthening of the foundations of which should constitute the first and most urgent care of the representation of the Russian people”.

Contemporaries noted that Rodzianko quickly adapted to his position as chairman of the State Duma, sometimes referring to himself as “the second most important person in the empire.”

His loud commanding voice and a heavy figure, earned Rodzianko the nickname “Drum” from deputies.

Within the Imperial family, the Duma, to put it mildly, was disliked. During every conflict, the Empress Alexandra Feodorovna urged her husband to dissolve parliament. However, Rodzianko, who had developed good relations with the Imperial couple, argued that such a move would only aggravate the situation and strengthen the position of revolutionaries.

But soon Rodzianko’s relations with the Emperor, and especially the Empress, began to deteriorate.

The reason for this was Grigory Rasputin. While the Imperial couple befriended the “Strannik,” Rodzianko was convinced that he was a conman who undermined the authority of the monarchy.

Supporting Russia’s entry into the war with Germany, the chairman of the State Duma then began to criticize the methods of governing the country during this difficult period.

Rodzianko considered it necessary to create an office of people who could carry out reforms to prevent an impending disaster.

The last straw for Nicholas II was Rodzianko’s objections against the emperor’s intention to take command of the Russian army. He obtained a personal audience, at which he assured Nicholas II that this step was erroneous and would have dire consequences. The Emperor did not heed the emotional words of Rodzianko,who was in fact, among the oppositionists.

By the end of 1916, the Chairman of the State Duma was among those who believed that saving the country not only meant eliminating Rasputin immediately, but also by changing the monarch, who, he believed was incapable of governing the state during such a difficult period.

At the beginning of February 1917, Rodzianko, at a reception with Nicholas II, said to the monarch: without giving the country a “ministry of trust”, revolutionary upheavals are possible in the very near future.

The Emperor did not listen, but the chairman of the State Duma himself had no idea that his prediction would take place within a few days time.

During the days of the February Revolution, Rodzianko became a key figure: he informed the monarch about the situation in Petrograd and also maintained contact with the commanders of the fronts.

Rodzianko was convinced that a constitutional monarchy could help preserve the country. During the uprising in Petrograd, he headed the Provisional Committee of the State Duma, which, in fact, assumed the functions of government.

In this capacity, Rodzianko, with the support of the generals, convinced Nicholas II that the only way to save Russia was for the Sovereign to abdicate.

The Chairman of the State Duma hoped that his dreams of a full-fledged constitutional monarchy would come true. But Nicholas II abdicated both himself and that of his only son and heir Tsesarevich Alexei, in favour of his brother Mikhail.

The brother of Nicholas II, Grand Duke Mikhail Alexandrovich, sought from Rodzianko guarantees that such a decision would be supported by the people. The Chairman of the State Duma could not give such guarantees, and then Mikhail signed the Act of Refusal to Take the Throne. 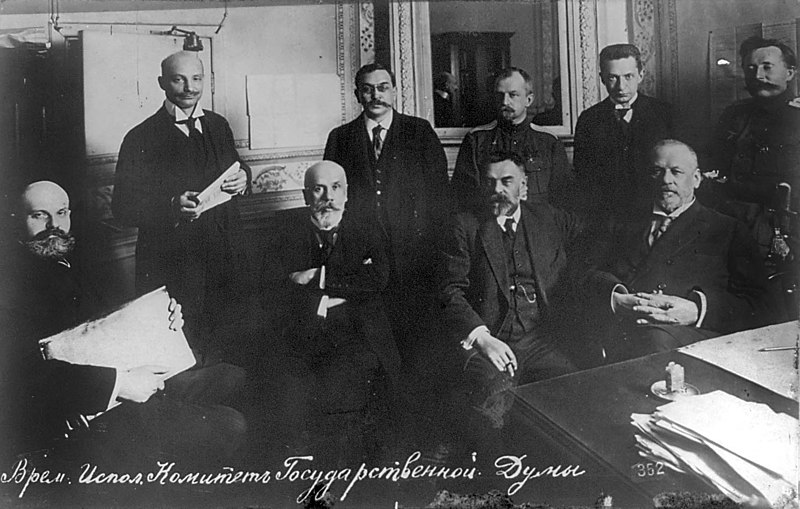 Members of the Provisional Committee of the State Duma (Russian Empire) in 1917 – Rodzianko is seated to the far right, Alexander Kerensky is standing behind him

Rodzianko did not join the Provisional Government, remaining the head of the Provisional Committee of the State Duma. This structure was rapidly losing its influence, and Rodzianko himself gradually found himself on the sidelines of the political process, although he refused to admit it.

Rodzianko did not embrace the Bolshevik revolution, and even tried to organize resistance to it in Petrograd, but without success. Then he went to the Don, joining the Volunteer Army.

He failed to gain the trust of his contemporaries. Many officers believed that Mikhail Rodzianko was one of the main culprits of the chaos and upheaval which overthrew the monarchy.

For the right, he was too revolutionary-minded, for the left, he was an ultraconservative reactionary.

After the defeat of Wrangel in 1920, Rodzianko went to Yugoslavia, where he lived in political isolation, spending time writing his memoirs.

According to Russian historian S.A. Alekseev, “in emigration, Rodzianko was ostracized by emigrant circles and subjected to harassment as a “seditious person” and a “revolutionary.” The White Guards were so hostile to him that shortly before his death, while traveling to Belgrade, he was beaten by former Wrangel officers.” [Source: Революция и гражданская война в описаниях белогвардейцев: Февральская революция / Revolution and civil war in the descriptions of the White Guards: February Revolution. 1926]

The lack of connections with other expatriates deprived him of the opportunity to receive money for his survival. For the last four years of his life, the former chairman of the State Duma had suffered not only from harassment from monarchists, but also from a banal lack of money. According to Bernard Pares, the English historian and academic known for his work on Imperial Russia, Rodzianko died in great poverty.

The death of Rodzianko on 24th January 1924, took place in the shadow of Lenin’s death. Even fate laughed at the former Chairman of the State Duma, who once considered himself “the second most important person in the empire.”

Click on the links below to read more articles about Mikhail Rodzianko:

Mikhail Rodzianko: A monarchist turned revolutionary published in the March 21st edition of Russia Beyond