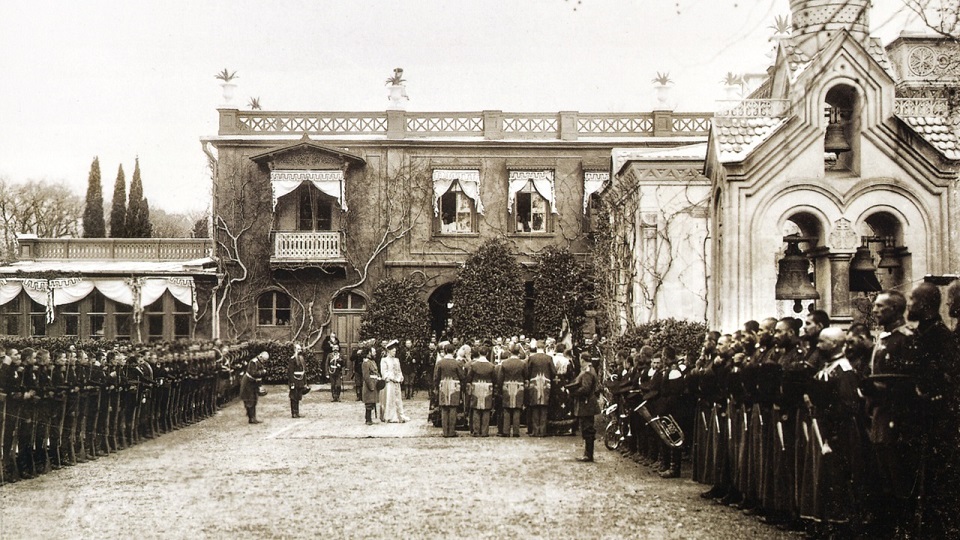 This vintage photo depicts Emperor Nicholas II and Empress Alexandra Feodorovna at Livadia in the early 20th century. It is set against the old wooden Grand Palace, built in 1861 for Emperor Alexander II and his family, by the architect Ippolit Antonovich Monighetti (1819-1878).

The Church of the Exaltation of the Cross (also by Monighetti) and bell tower can be seen to the right. A gallery connected the church to the palace. The church was small, because it was designed only for the imperial family, and was used by three respective emperors: Alexander II, Alexander III and Nicholas II.

It is known that the Imperial family arrived in Livadia with their children on 5th September 1909. It was during this visit, starting from 27th October, that Nicholas II and Alexandra Feodorovna met with the architect Nikolai Petrovich Krasnov (1864-1939) on numerous occasions, to discuss in detail the design of their new white palace, and the decoration of its halls and other rooms. The August couple approved the design on 12th December, just 4 days before leaving Livadia for St. Petersburg.

The old wooden Grand Palace was demolished in 1910, to make way for a new Italian Neo-Renaissance style stone palace, which would serve as the residence of Nicholas II and his family during their visits to Crimea. The Imperial family visited their new white palace in the fall of 1911 and 1913 and in the spring of 1912 and 1914.