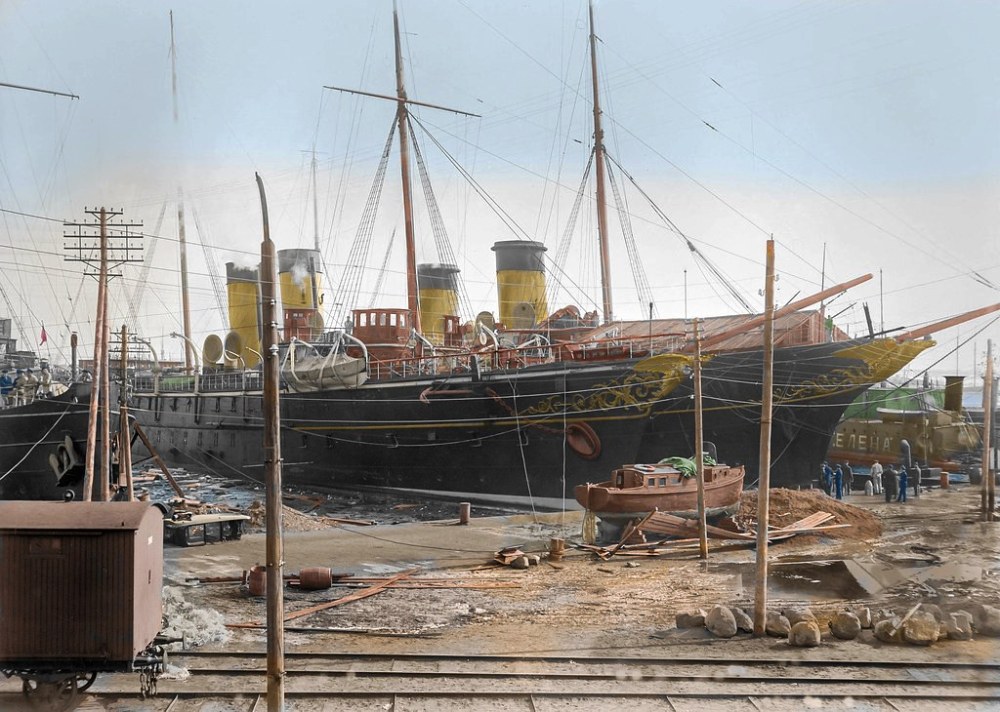 With the outbreak of World War I, both yachts were placed in dry-dock. They left Helsingfors for Kronstadt, only days before the Germans attacked. The fates of both the ‘Standart’ and the ‘Polar Star’ are equally sad.

The Imperial Yacht ‘Standart’ was built by order of Emperor Alexander III, and constructed at the Danish shipyard of Burmeister & Wain,² beginning in 1893. She was launched on 21 March 1895 and came into service early September 1896. It later served Emperor Nicholas II and his family.

In 1917, the ‘Standart’ was seized by Revolutionary sailors, and took part first in the February and then in the October Revolution.

The Imperial Yacht ‘Polar Star’ was built by order of Emperor Alexander III at the Baltic Shipyard on 20 May 1888. She was launched on 19 May 19 1890, and came into service in March 1891. It later served the Dowager Empress Maria Feodorovna, who used it annually to sail to Denmark and England.

During the First World War, the yacht was docked in Petrograd, and in early June 1917 moved to Helsingfors. In 1920, the ‘Polar Star’ was mothballed.

In the early 1930s, the former Imperial Yacht was converted into a floating submarine base for the Soviet Navy. Numerous changes were made to the yacht’s exterior, but the interior decoration of many rooms were preserved. On 20 August 1936, the naval flag of the USSR was hoisted on the yacht.

In 1954 it was converted back into a floating ship, in 1961 as a target ship for testing anti-ship missiles. In November 1961, the ‘Polar Star’ was sunk in the Gulf of Riga, after being hit during a naval exercise. The final fate of the former Imperial Yacht remains unknown, although according to some reports, it was scrapped in the early 1970s.

¹ The Imperial Yachts ‘Polar Star / Полярная звезда’ (left) and ‘Standart / Штандарт’ are easily distinguished by their funnels and the double-headed eagle figurehead, located on the bow of each vessel.

² Burmeister & Wain remain in business to this day, The blueprints for the Imperial Yacht ‘Standart’ have been preserved in the archives, a copy of which is also in the National Maritime Museum in Greenwich, England.