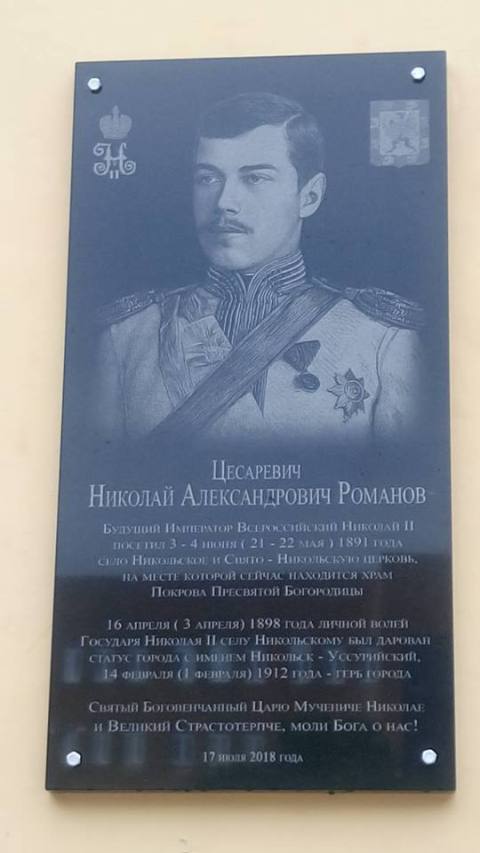 On 17th July 2018 a memorial plaque in honour of Tsesarevich and Grand Duke Nicholas Alexandrovich (future Emperor Nicholas II) was unveiled on the northern facade of the Church of the Intercession of the Holy Virgin in the Far-eastern Russian city of Nikolsk-Ussuriysk.

The memorial plaque was established in honour of the August visit of Nicholas Alexandrovich on 3-4 June 1891, as part of his Eastern Journey, and the construction of the Ussuri section of the Trans-Siberian Railway. The memorial also marks the 120th anniversary of the granting of the status of the city with the name Nikolsk-Ussuriysk on 16th April 1898, by the will of the Sovereign Emperor Nicholas II to Nikolsky, and, subsequently – the city coat of arms.

The work on the preparation of the memorial plaque was initiated by a group of historians, parishioners and residents of the city. The project was agreed and approved, with the blessing of Metropolitan Veniamin of Vladivostok and Primorye.

Associate Professor of the Far Eastern Federal University Yaroslav Popov, who headed the group, said that exactly at this place, in the wooden St. Nicholas Church (Nikolsk-Suifunsky), the Tsesarevich Nicholas Alexandrovich prayed during his visit in 1891. After the Liturgy, the Tsesarevich addressed the soldiers of the Nikolsk fortress, Russian residents and settlers, representatives of local peoples, Chinese and Korean diasporas, thanking everyone for their warm welcome.

The Divine Liturgy held on 17th July 2018 was attended by the mayor of Ussuriysk, Evgeny Evgenevich Korzh and the head of the Ussuriisk urban district Nikolai Nikolayevich Rud. After the consecration of the memorial sign, the choir of the parishioners of the church performed the hymn of the Russian Empire “God Save the Tsar”.

This was followed by the reading of the poems of the famous Russian poet Sergei Sergeivich Bekhteev (1879-1954), who escaped Russia after the Revolution. Bekhteev’s poems are full of love for the Motherland, the monarchy and the Holy Royal Martyrs. Countess Anastasia Hendrikova managed to pass five of Bekhteev’s poems to the Tsar’s family during their house arrest in Tobolsk. Emperor Nicholas II, was so moved by Bekhteev’s poem “God Save the Tsar”, that he shed a tear and asked to convey his gratitude to the poet for sharing his loyal feelings.