On 19th May 2018, members of the All-Russian public movement “National Idea of ​​Russia” and the Kuban Cossacks laid flowers at the monument to Emperor Nicholas II in the village of Taininskoye (Mytishchi), which is situated about 19 km northeast of Moscow.

Like the fate of the Sovereign, the monument has a tragic history, being blown up twice by extremists. However, the monuments’ scupltor Vyacheslav Mikhailovich Klykov (1938-2006) restored it each time.

The monument to Emperor Nicholas II was installed in the suburban village of Taininskoye, on the site of the royal road in May 1996.

The opening of the monument was timed to coincide with the 100th anniversary of the coronation of the last Russian Tsar (held in Moscow on 26 May (O.S. 14 May) 1896. This is one of several monuments to Nicholas II in Moscow and region. The inscription on the monument read: “To the Emperor Nicholas II from the Russian people with repentance”.

Sadly, it did not stand for long: on 1st April 1997, the monument was blown up by the left-wing extremists of the group “Revolutionary Military Council”. Their reason, was their opposition to the removal of Lenin’s corpse from the mausoleum in Red Square.

In November 1998, the monument was restored, however, in the winter of the same year it was again blown up.

Then the sculptor of the monument Vyacheslav Klykov created for the third time a new copper monument, which was unveiled in August 2000. The crowned emperor stands proudly, dressed in an ermine mantle, holding a scepter in one hand, mantel in the other. The sculpture represents him at his highest triumph – his ascension to the Russian throne. 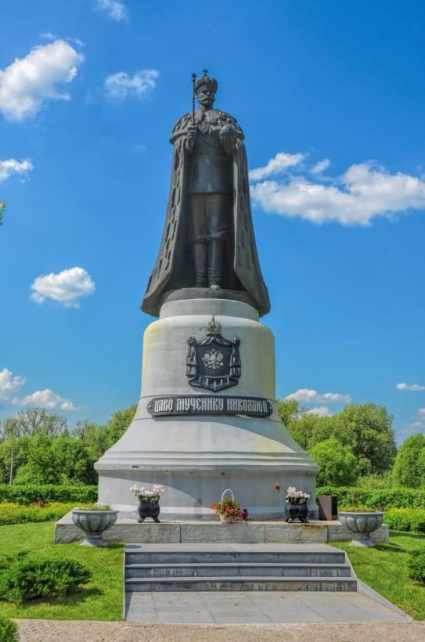 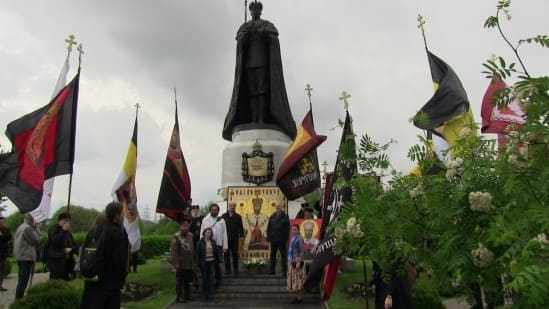 After the second explosion, Klykov donated money from his own pocket to help finance the restoration of his monument to Nicholas II.

He noted at the unveiling: “If in days gone by, the Russian people could not protect their tsar, now, believe me, we can do it.”

The ceremony was timed to coincide with the day of the canonization of the Imperial family by the Moscow Patriarchate on 15 August 2000.

Since the fall of 2004, believers from all over the Russian Land have been drawn to the village of Taininskoye. And the appeal of the Russian people “To the Russian Emperor Nicholas II Russian people with repentance”, seemingly destroyed along with the first monument, turned out to be prophetic! The explosion, which was to erase the very idea of ​​repentance before the Emperor Nicholas II, could not change the Providence of God.

So on 19th May 2018, many Orthodox Christians and monarchists came to the monument to pray, lay flowers, unfurl Tsarist-era flags, all in preparation for the procession. The Kuban Cossacks brought with them the Cossack penitential icon of the holy martyr Tsar Nicholas.

Thanks to the talented Russian sculptor Vyacheslav Mikhailovich Klykov, we have the opportunity to honor the memory of the Emperor. Forgive us, Sovereign!