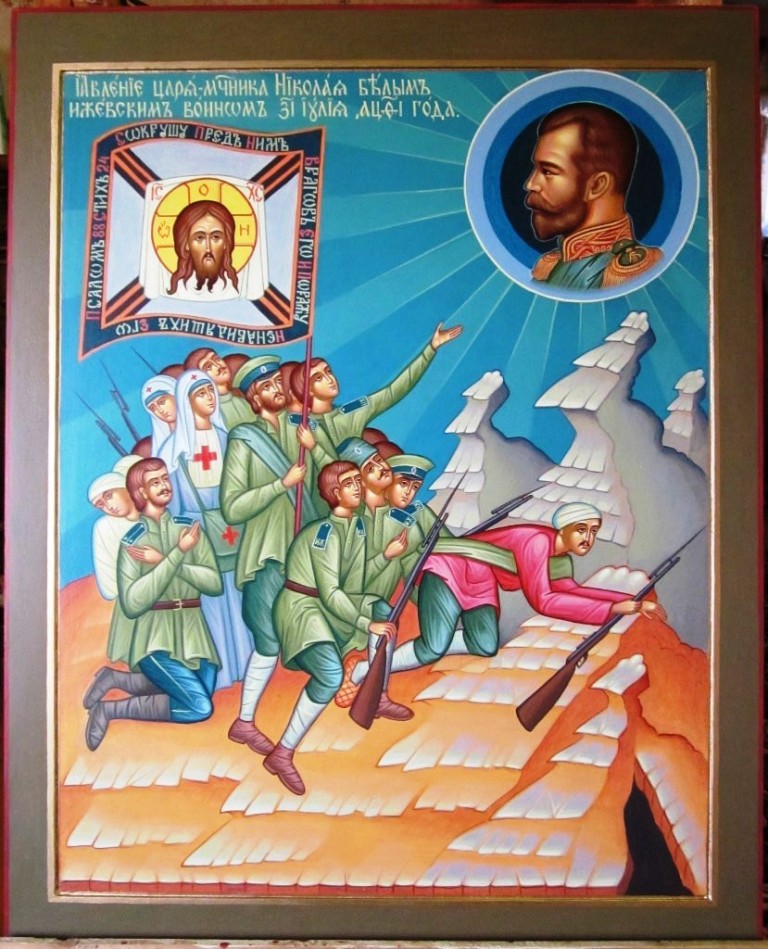 Did White Russian soldiers see a vision of Tsar-Martyr Nicholas II in July 1919?

According to the memoirs of the wife of the commander of the 1st Izhevsk Rifle Regiment – Vera Mikhailovna Mikhailova, who, along with her husband, were fleeing across Russia during the Civil War to the safety of the Far East, they did!

“It was a day impossible to forget,” wrote Vera Mikhailovna Mikhailova in her diary:

“During the month of July 1919 the heat was incredible, the humidity unbearable. Our 1st Izhevsk Regiment, made up of volunteers, mostly workers of the Izhevsk arms factory, were tormented by raids of partisan gangs and Bolshevik sympathizers. All the time it was necessary to fight back, to drive them back to drive them out of the area they occupied. This lasted for several days.

“Finally, after many days of fierce, bloody battles, our regiment was given a reprieve. The situation was terrible: it was no longer a brave military regiment, but a group of tortured, tired men, who were barely alive. Their tunic collars were unfastened, their belts loose and dangling, their legs weak. Many, shuffled their feet as they walked, raising dust along the way. Some held on to each other so as not to fall, others fell from sheer exhaustion. The heat was pestering, terrible, we were thirsty, our mouths dry, and not a drop of water to be had – all the reserves had run out.

“The sky is clear, blue, not a cloud to be seen. The sun burns mercilessly. Suddenly a loud piercing cry is heard:

“Look at the sky!” Everyone instantly woke up, stopped, raised their heavy heads, and the following vision appeared before them: a large white disk appeared in the sky, and on it appears the profile of the Sovereign Emperor Nicholas II, very clear and precise.

“Everyone froze at the sight of this wonderful phenomenon. Then, raising their hands to the sky, they began to desperately shout: “Tsar! Sovereign, Father Tsar!” … And then they knelt down and began to pray earnestly and ask: “Tsar … Sovereign … Father Tsar, help us, pray for us …” It is hard to say how long this vision lasted, but it seemed for a long time. Then gradually the vision began to turn pale and completely disappeared. It became the same blue sky, without a single cloud to be seen.

“Suddenly a command was heard: “Get up! Be strong! Attention! March!” Everyone immediately came to life and walked with a brisk military step. Faces were cheerful, joyful. Everything was forgotten: thirst, hunger, heat, fatigue. All the while their eyes were fixed on the sky and in a whisper they said: “He is here! … With us … He prays for us!”.

“When the excitement subsided, the men began asking questions: “What year is it?”. . . “Year? It is the nineteenth …” . . . “And what is the month and day?” . . . “July” . . . After continuous heavy battles the men had lost track of time. The rebirth of these men, tormented by heat, fatigue, thirst, barely alive – into a group of healthy, strong and vigorous combat soldiers, how can this be explained? How is this not fiction, a dream, or an hallucination! I myself was a witness to everything seen and heard.

“Maybe, and probably, there is still someone alive who saw and was present at this miracle, I ask them to respond and confirm. And to add, if that I forgot, missed. Please remind!

“Many decades have since passed. But every year in the month of July, I am nervous and terribly worried, as if all this happened yesterday. The whole vision of what happened clearly stands before my eyes, which have long been senile. And back then, in 1919 I was 23 years old …

“I personally am sure that this miraculous phenomenon and occurred precisely on July 17, when the Tsar seemed to say goodbye forever to his beloved troops.”