Empress Alexandra Feodorovna’s Mauve (Lilac) Boudoir was a favourite room for the Imperial family and their guests. It was in this room that the Empress, often together with Nicholas II came to relax, read books, played music, make handicrafts on the couch, and drank tea at a round table. In winter, the room was decorated with fragrant bouquets of white lilacs, grown in the imperial greenhouses at Tsarskoye Selo. The decoration of the Mauve Boudoir, which was part of the Empress’s private chambers, was completed in a short time, in just two and a half months in 1895.

According to documents and drawings, approved by the Empress herself, the F. Melzer & Co. in London, England produced a set of furniture, which consisted of a built-in sofa, built-in shelves and a set of two plateaus (jardinieres) for plants, etc. 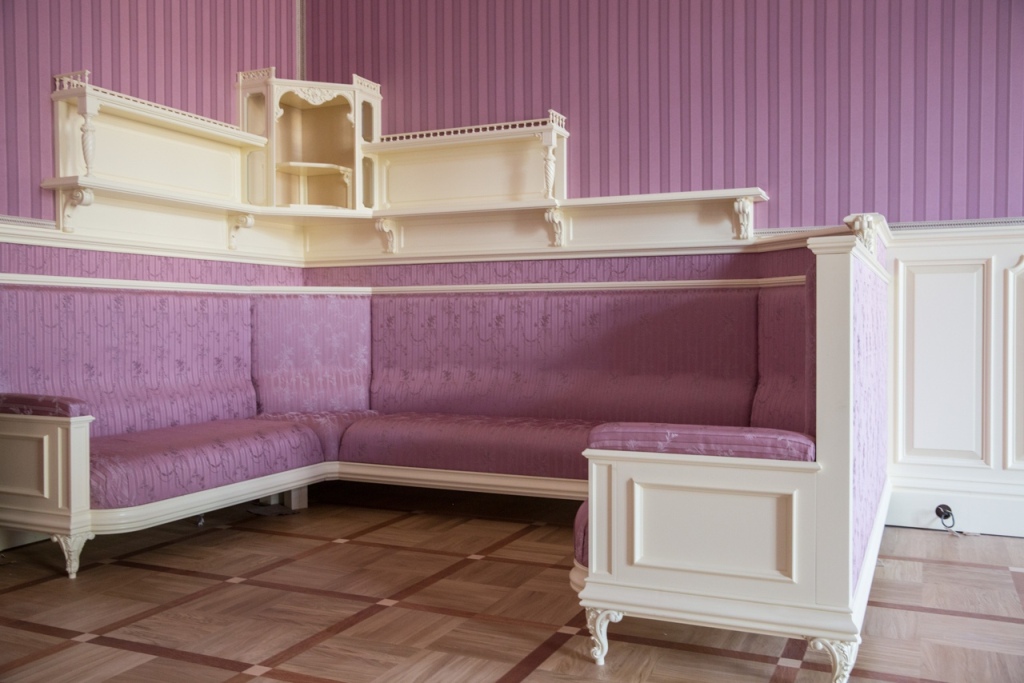 Sadly, almost all of the furniture items in this room were destroyed during the Great Patriotic War (1941-45). Employees of the Scientific Fund Department of the Museum-Reserve did a lot of research and preparatory work, discovered archival documents and photographs that were used for the recreation of the furniture for the Mauve Boudoir.

In photographs preserved in the Collection of the Tsarskoye Selo State Museum and in photographs from the albums of the historical collection of the Alexander Palace (now stored in the State Archives of the Russian Federation in Moscow), allowed experts to view individual pieces of furniture items in the Mauve Boudoir from different angles, thus making it possible to recreate exact copies of the structural elements and decoration details for the room.

The matter of painting panels, doors and cabinet furniture required a separate study. In the colour scheme of the panels, two shades were used, this can be seen in colour autochromes and is confirmed by archival details from the workshops. The recipe found in the archive, indicating the materials of painting and their proportional ratios, helped restorers to define a modern analogue and apply it when painting the furniture of the Mauve Boidoir in two tones, says Anna Tarkhanova, senior researcher at the Museum-Reserve, who took an active part in the work on the reconstruction of the interior.

PHOTOS: experts review historic photos and drawings for the
recreation of the furniture for the Mauve (Lilac) Drawing Room

The only original item to survive from the Empress’s study was a writing-table, which entered the collection of the museum-reserve in 1999, also helped in solving this issue. During the Great Patriotic War, the table had not been evacuated. It was found in a deplorable state after the war in the Alexander Park by the former curator of the Alexander Palace, Anatoly Mikhailovich Kuchumov (1912-1993). In 2018, restorers conducted test clearing of the paint layer of the table, determined the initial colour of its finish and, on the basis of this, made a decision on the colour scheme of the panels, built-in furniture and doors of the Mauve Boudoir. In 2020, the masters of the Tsarskoye Selo Amber Workshop restored the table and recreated the lost details, based on photographs and archival descriptions.

The work on the recreation of the upholstered and cabinet furniture of the Mauve Boudoir was also carried out by specialists from the Tsarskoye Selo Amber Workshop (director Boris Igdalov) in accordance with the design developed in 2019-2020 by the Studio 44 Architectural Bureau in St. Petersburg.

For the upholstery of the furniture set, fabrics, cords, fringes and tassels were recreated according to historical samples that are kept in the Tsarskoye Selo and Pavlovsk Museum-Reserves. When restoring fabrics, the technologists were guided by the design approved by the museum-reserve and the Renaissance workshops for the restoration of ancient monuments based on materials presented by the museum. The analysis of the fibers of the fabric, the type of threads, their colour and the style of weaving the fabric, as well as the fabrication itself, was carried out by specialists of the famous Italian firm RUBELLI. The trim items were made at the English company Tassel & Trim and the Polish company Re Kon Art. The process of ordering, manufacturing and delivery of these elements for the rooms’ decor was supervised by Janusz Szymanyak, director of the Renaissance Workshops for the Restoration of Antiquities.

PHOTO: colour autochrome of the Mauve (Lilac) Boudoir, taken in 1917

Dear Reader: If you enjoy all my updates on the restoration of the Alexander Palace, then please help support my research by making a donation in US or Canadian dollars – donations can be made by GoFundMe, PayPal, credit card, personal check or money order. Click HERE to make a donation or click HERE to buy one of my Nicholas II calendars – the net proceeds help fund my work. Thank you for your consideration – PG