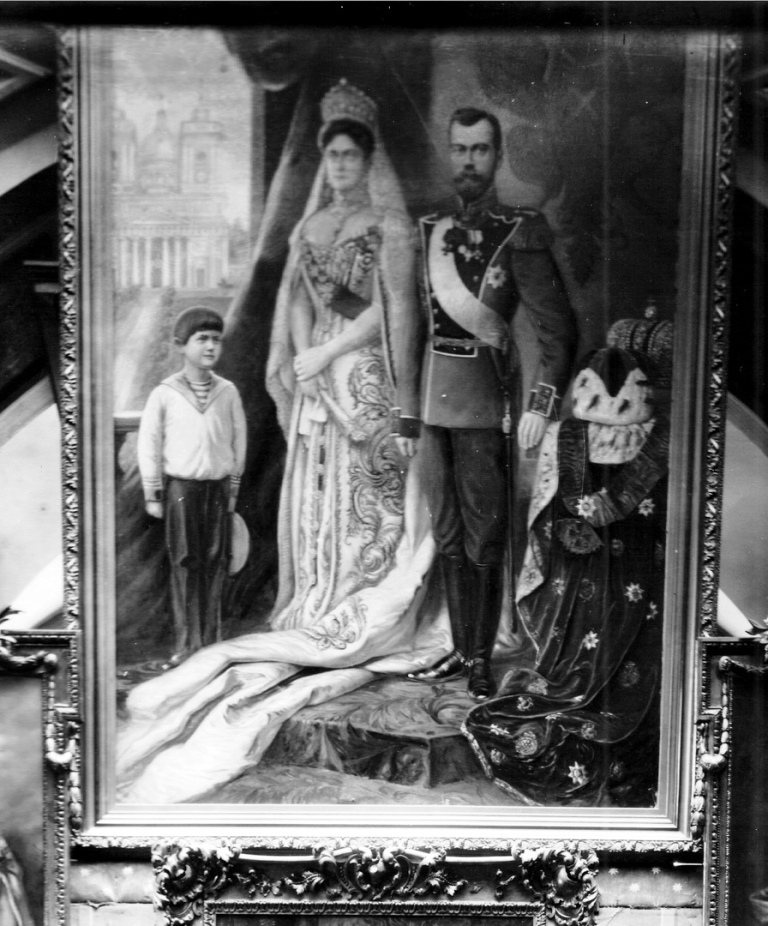 The portrait is quite unique. The Emperor and Empress are depicted in ceremonial robes with orders, standing next to the regalia of imperial power – the crown and ermine mantle, while Tsesarevich Alexei is dressed in a simple sailor’s uniform. The Trinity Cathedral of the Lavra is visible to the left in the background.

The artist was the famous Russian portrait painter of the late 19th-early 20th centuries, Andrey Andreevich Karelin (1866-1928), who, worked on orders from the Ministry of the Imperial Court. He painted historical and religious themes, portraits, and icons. He took part in the painting of the pavilion of the Nizhny Novgorod All-Russian Exhibition in 1896, in the creation of the interior decoration of the Church of the Resurrection of Christ in St. Petersburg, the Church of Alexander Nevsky and the Church of the Life Guards of the Ulan Regiment in Warsaw (1907), for the Church of the Resurrection of Christ (Saviour on Blood) in St. Petersburg, he created designs for 10 interior mosaics “Parable about poor Lazarus after death” and designs for an additional 9 mosaics of saints, martyrs, apostles and monks on pilasters.

For the 300th anniversary of the Romanov dynasty in 1913, Karelin created a 10-meter canvas depicting the accession of Tsar Mikhail Feodorovich Romanov, for which he received personal nobility from Emperor Nicholas II.

The Ancient Depository of the Alexander Nevsky Lavra was closed in 1922 in the midst of a Bolshevik campaign to confiscate church property, which the monastery. All items of artistic value were transferred to the State Museum Fund, and then distributed among the museums of Russia. As a result, the fate of Karelin’s portrait of the Imperial Family, as well as many of his significant works commissioned by the Imperial Court remains unknown to this day.

If you find my articles, news stories and translations interesting, then please help support my research by making a donation in US or Canadian dollars to my project The Truth About Nicholas II – please note that donations can be made by GoFundMe, PayPal, credit card, personal check or money order. Thank you for your consideration – PG