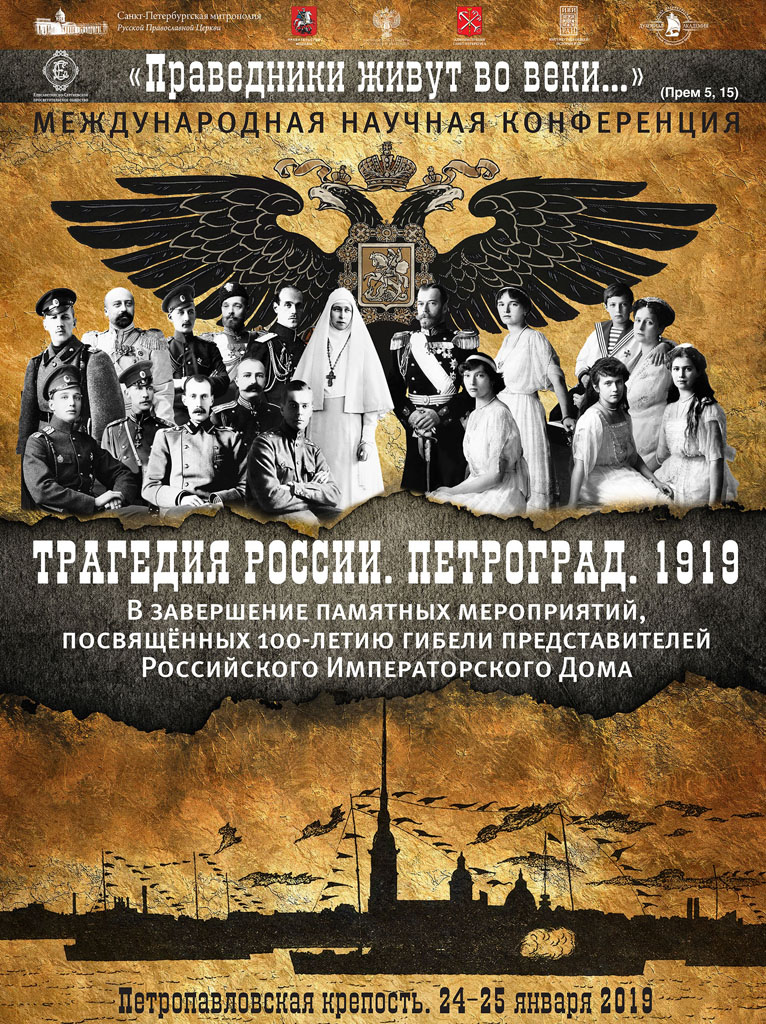 Poster for the international scientific conference “The Righteous Live Forever …”

On 24-25 January 2019, an international scientific conference “The Righteous Live Forever …” was held in the Peter and Paul Fortress in St. Petersburg.

The conference, which was organized by the Elisavetinsko-Sergievsky Educational Society Foundation, was the conclusion of events marking the 100th anniversary of the murders of members of the Russian Imperial Family in 1918 and 1919 by the Bolsheviks.

One of the central themes of the conference was the enormous charitable activities carried out by the Imperial family. According to historians, the Bolsheviks did much to shape a negative image of the Imperial family. They created myths that Nicholas II spent enormous funds for his own needs, although in fact he and his family lived quite modestly. In addition, each member of the Imperial family had their own personal “charity programs,” making sizable donations from their own pockets, for the maintenance of hospitals, educational institutions, and other charitable organizations.

Nicholas II had enormous funds at his disposal, however, an annual budget of the Imperial Court was strictly adhered to, which included the personal expenses of the family. There were strict calculations, in which even the purchase of new clothes was regulated, says historian Professor Igor Zimin, one of Russia’s foremost experts and author of numerous books on the last tsar and his family.

The Russian State Historical Archive has in its collection, an accounting book of Nicholas II. In fact, the ‘Emperor’s Personal Wallet’, record donations he made to a number of charities. These include expenses on pensions, the maintenance of boarders and the upbringing of children, donations, allowances, gifts and cash awards. Plus extraordinary expenses that went in favor of educational or charitable institutions, including churches. The accounting book records various sums of donations – 16,400 rubles, 44 thousand rubles, 11 thousand, 500 rubles, etc. 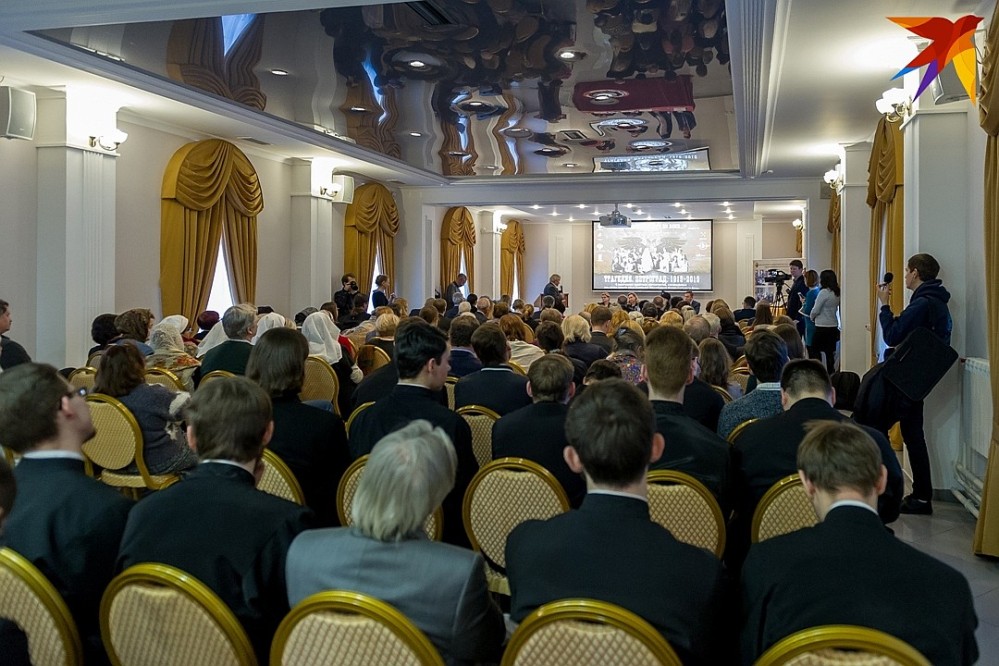 Delegates attending the conference held on 24-25 January in St. Petersburg

The sovereign received a large amount of correspondence with requests to help or participate in charity events. It is recorded that in 1898, Nicholas II gave 5 thousand rubles for the completion of an Orthodox church in a remote region of Russia. And to help someone’s widow he gave out 350 rubles annually from his own funds. The first St. Petersburg State Medical University emerged largely due to the participation of the emperor. Often the sovereign acted anonymously. In 1901 he ordered the transfer of 50 rubles to the editorial office of a magazine for Russian disabled persons – as an anonymous donation.

According to Professor Zimin, all members of the Imperial family considered it their direct duty to help and give to those less fortunate. The expenses of the Romanovs grew precisely because donations increased every year.

The Emperor’s wife, Alexandra Feodorovna, initiated the annual Christmas trees for children from poor families. She contributed to the founding of numerous educational institutions, shelters, and hospitals. She worked as a Red Cross Nurse when the war between Germany and Russia began in 1914. It is impossible to imagine the spouse of a member of the Politburo working as a nurse in a soldiers’ hospital during Soviet times. During the war, her children asked that in lieu of gifts, that the money be given to help orphans and soldiers.

“Once the sovereign with his family stopped at one of the railway stations. A local official turned to him telling the tsar that his small salary was not enough for his large family. Nicholas II promised that he would receive 30 rubles a month, and his son and heir Tsesarevich Alexei said that he would add another 40 rubles a month,” notes Chief Specialist of the State Archive of the Russian Federation Vladimir Khrustalev. 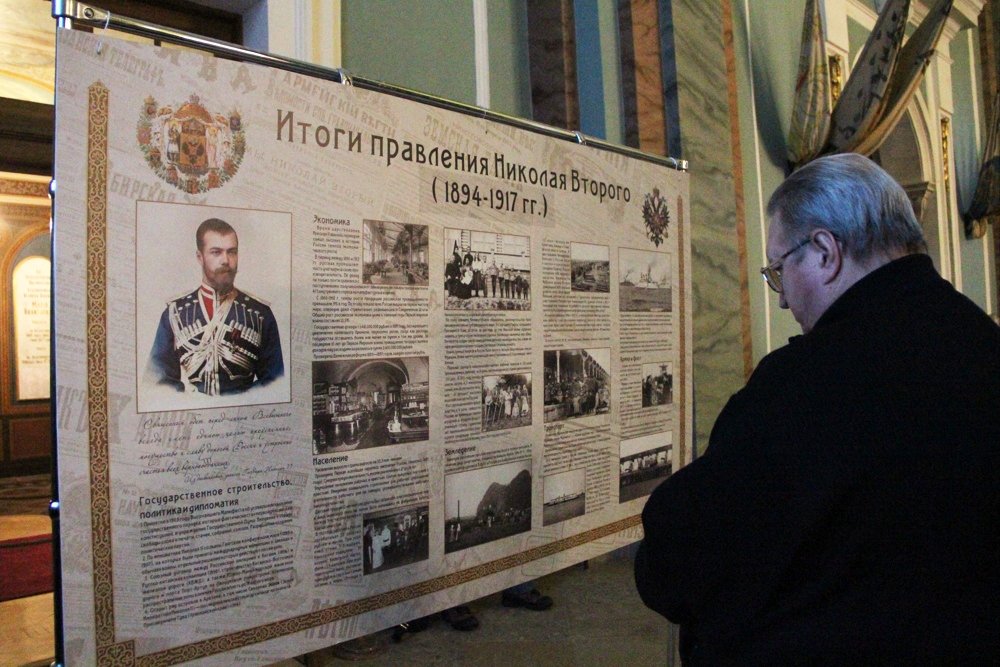 Information boards told the story of the Imperial family’s philanthropy

“The Grand Duchesses Olga and Tatiana headed committees which provided direct assistance to those who suffered in hostilities as well as their families,” says the head of the history department of Kaliningrad State Technical University, Professor Alexei Khitrov.

Their respective committees created more than a dozen forms of assistance and 30 projects to collect donations. All those in need received money, clothes, and work. They had the support of local governors, representatives of the diocese, zemstvo, city public administration, leaders of the nobility, and representatives of charitable organizations.

In cooperation with the central government and the patronage of the Imperial Court, this created a system of democratic centralism, working effectively through the years of the First World War. In 1914, thousands of refugees from the Polish and Baltic provinces flooded into Russia. But thanks to the work of the committees, they were all fed, clothed and sheltered.

The Olginsky and Tatiana Committees distributed 68 million rubles in aid. There were no allegations of corruption, dishonesty, or wasting money.  By the beginning of 1917, the committees set up work on registering and assisting refugees. The Olginsky and Tatiana committees were recognized as the most viable of all the institutions of that time. They worked effectively until the spring of 1918, after the Russian Empire crumbled under the Bolshevik order.