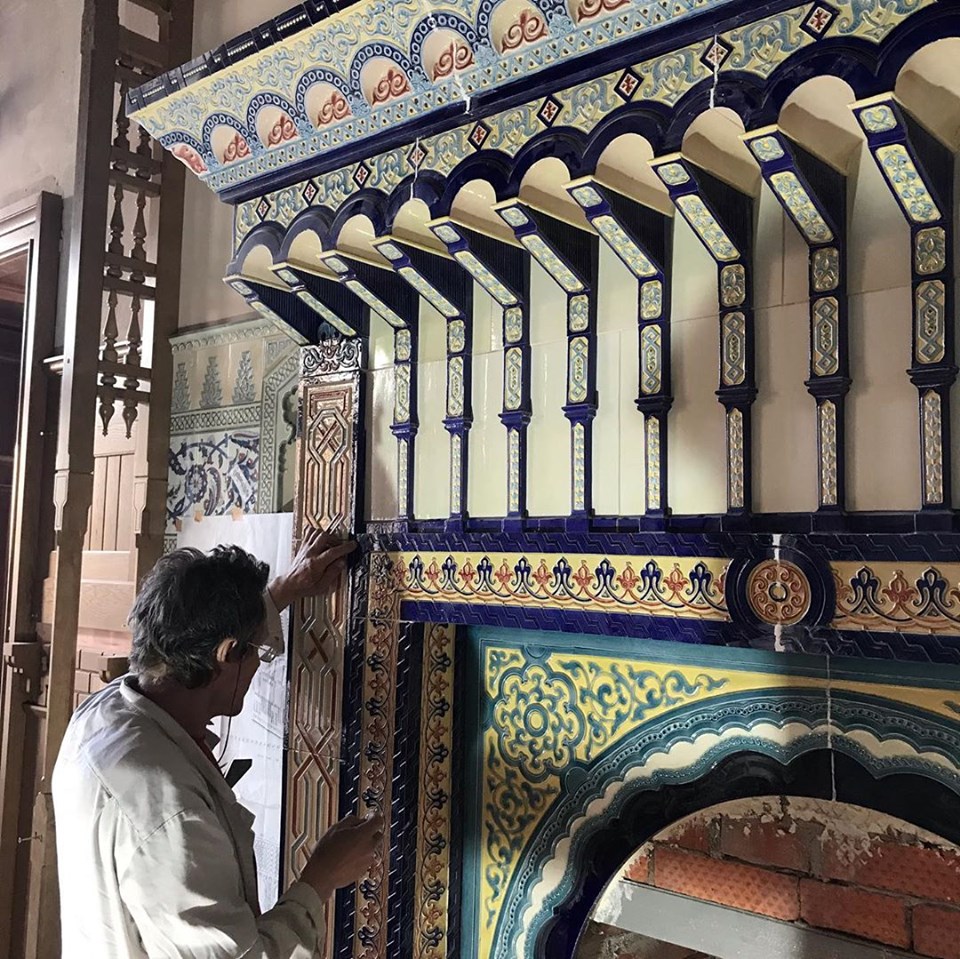 My latest report on the reconstruction of the private apartments of Nicholas II and Alexandra Feodorovna in the Alexander Palace, and the recreation of their historic interiors, provides an update on the Tsar’s Bathroom – PG 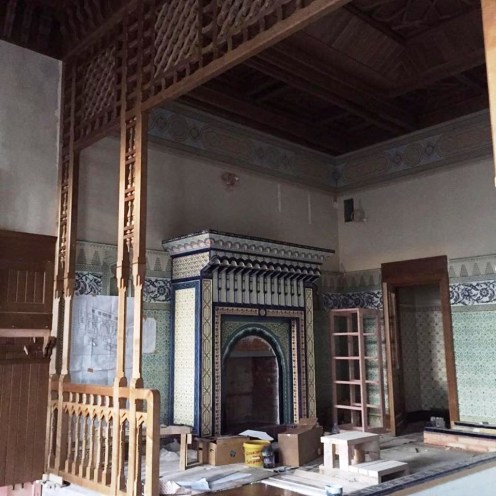 The reconstruction and restoration of Nicholas II’s Bathroom, situated in the eastern wing of the Alexander Palace is nearing completion. The main feature is a giant heated swimming tub – where the Tsar, and Tsesarevich Alexei liked to swim. “This was all lost, but now the restorers, have completely recreated the interior, based on pieces of ceramics from the walls, and photos from the palace-museum archives,” said Director of the Tsarskoye Selo State Museum Olga Taratynova.

Once completed, Nicholas II’s Moorish-style Bathroom will be one of a series of rooms showcasing the private apartments of the last emperor and empress of Russia. Work is being carried out by the Stavros and Artcorpus Interiors firms in St. Petersburg. 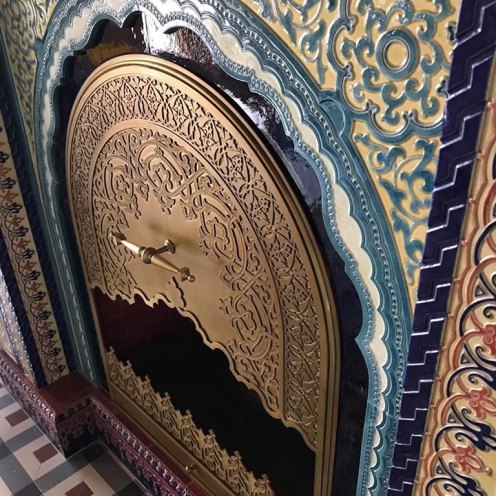 According to Bob Atchison’s Alexander Palace Time Machine, “the Tsar’s Bathroom had a giant heated swimming tub on a platform which also led, via a glass and wood door, to his toilet, which was a dark room hung with an assortment of pictures including a humorous cartoon of Nicholas driving a car.

“The bathroom was designed in the Moorish style by Robert-Friedrich Meltzer (1860-1943). The millwork of the room was intricately fabricated in fragrant woods. The ceiling was particularly complex. Meltzer added many interesting touches to the room including hanging glass lanterns in the shape of old mosque oil lamps. For practical reasons they were wired for electricity. He also installed magnificent antique Turkish tiles around the top of the bath. In the arcade of the tub-platform he designed elaborate patterns in Arab style.

“It was great fun for the Tsar’s children, when they received permission from their father, to use his bath. A thick cord prevented falling into the bath by accident. The swimming bath was huge, it held 500 pails of water [1000 according to the Tsarskoye Selo State Museum Reserve-PG] and had its’ own powerful special hydraulics to rapidly pump hot water from the basement boiler up into the tub. Nicholas ordered the bath to be constructed in the palace in 1896 after seeing a similar bath on one of his estates. He used it almost every day. A special servant was assigned to maintain the equipment below and a second servant was assigned to keep the bath spotless after every use.

“Outside the tub platform, Nicholas installed a chinning bar (seen in above photo), seen in a photograph, taken in 1917. The Tsar was passionate about exercise and also had a similar chinning bar in his train. He also had weights in his bathroom for working out.

A view of the tub-platform showing the fireplace, 1917 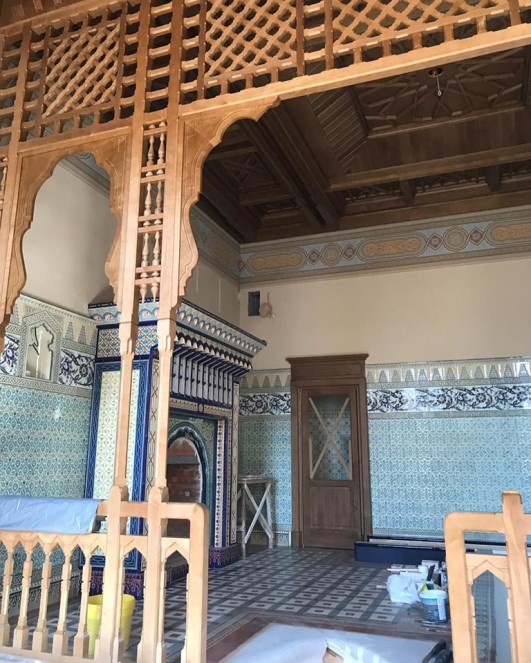 A view of the tub-platform showing the fireplace

“On the back wall, by the left hand side of the door leading to the Tsar’s Working Study, was a collection of ions and hanging Easter eggs. To the right was draped an embroidered cloth with a double-headed eagle, probably the work of Alexandra or one of the girls. [The embroidered cloth with a double-headed eagle, can also be seen in the 1917 posted above-PG]

“Nicholas kept a large collection of Fabergé cigarette cases on the table in front of the window. He put up a display of gifts and small objects from his children in the bathroom. These included porcelain penguins and dancing girls. A floral watercolor painted by his daughter, Marie, and dated May 1917, hung on the door from the bathroom to the Working Study.”

Reconstruction of the Tsar’s Bath or swimming tub

The Alexander Palace, has been closed for restoration since August 2015. The palace was scheduled to reopen in July 2018,  however, numerous delays have pushed now back the reopening date to the end of 2019.

“We really want to make everyone happy for the new year. But in any case, the recovery process is underway and has already progressed significantly. So if not at the end of December 2019, then in the first quarter of 2020, the Alexander Palace will open its doors,” says the Director of the Tsarskoye Selo Palace Museum.

For more information on the reconstruction and restoration of the Alexander Palace, please refer to the following articles:

Furniture for interiors of the Alexander Palace to be recreated