During the Soviet years, the Alexander Palace was established as a museum. This video shows a group walking through the former rooms of Nicholas II and his family. The year of 1918 is noted in the video, however, this is incorrect – PG

In 1918 the former residence of Tsar Nicholas II and his family was established as a museum and open to the public. The exhibit included the historical interiors
in the central part of the building and the private apartments of the last tsar and his family located in the east wing of the palace.

In 1919, the west wing was turned into a rest home for staff of the People’s commissariat for Internal Affairs (NKVD), while on the second floor of the east wing the former rooms of Nicholas II’s children became an orphanage named after the “Young Communards”.

Enfilade of ceremonial halls of the Alexander Palace. 1920s

The Soviet regime were hostile towards the ‘Romanov Museum,’ and made constant threats throughout the 1930s to close the museum and sell off its treasures. Luckily, the museum staff managed to dissuade the government from this step and the museum operated up until the beginning of the Second World War.

In the first months after the Nazi invasion chandeliers, carpets, some items of furniture, eighteenth-century marble and porcelain articles were evacuated from the Alexander Palace. Most of the palace furnishings remained in the halls.

During the occupation of Pushkin the palace housed the German army staff and the Gestapo. The cellars became a prison and the square in front of the palace a cemetery for members of the SS.

The palace survived World War II with minor damage, according to military records—unlike the Catherine Palace, the Palace of Pavlovsk and the Grand Palace of Peterhof, which were almost completely destroyed during the German occupation. Although the exterior was damaged, the majority of the interiors were reported as unharmed, with the exception of some rooms which received moderate to serious shell damage.

The palace had been looted by the retreating Nazi’s which resulted in many of the palaces works of art, furniture and other items being stolen. According to the Ministry of Cultural Affairs of the Russian Federation, registered inventory for the Alexander Palace had—30,382 items, of which 22,628 items were recorded as lost or stolen at the end of World War II. 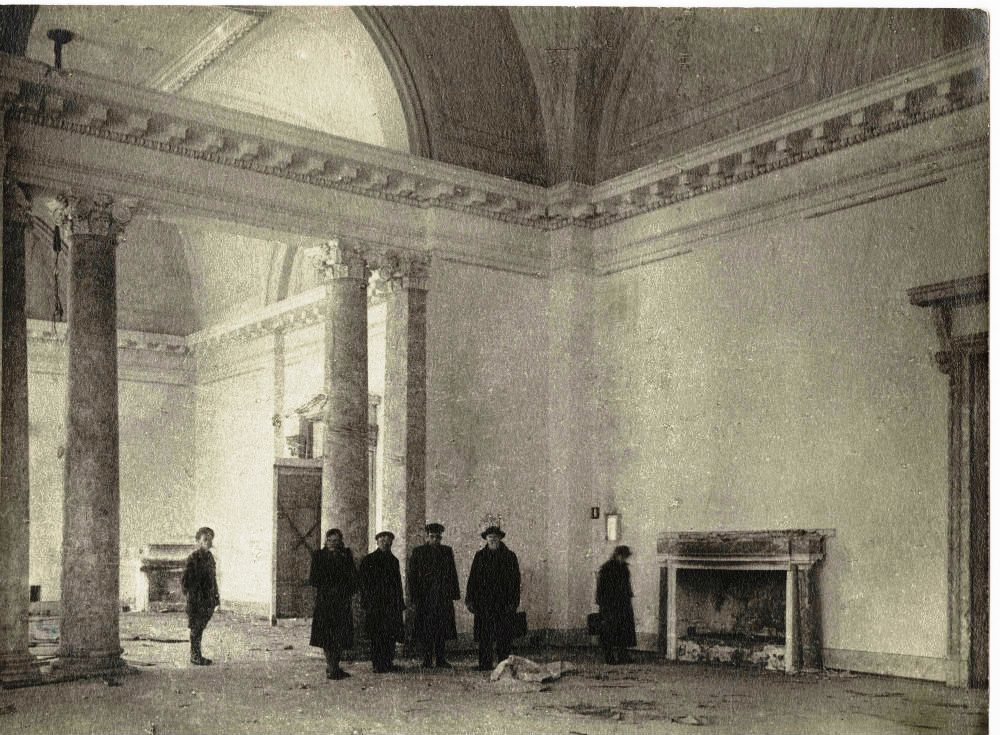 Representatives of the State Emergency Commission and museum workers examine the destruction of the large central hall of the Alexander Palace. Photo by S. G. Gasilov. May 1944.

At the end of the war the Alexander Palace was mothballed. Conservation work was carried out in the palace and in 1946 it was handed over to the USSR Academy of Sciences for the storage of the collections of its Institute of Russian Literature and to house a display of the All-Union Pushkin Museum. As a consequence in 1947-51 refurbishment began in the palace, in the course of which it was intended to restore the surviving Quarenghi interiors and extant fragments of décor and also to recreate the interiors from the time of Nicholas I and Nicholas II. However, during the work many elements in the décor of Empress Alexandra Feodorovna’s Maple and Palisander Drawing-Rooms, as well as Nicholas II’s (Moresque) Dressing-Room were actually destroyed. These rooms of the palace were recreated to a project by the architect L.M. Bezverkhny (1908–1963) “in accordance with the architectural norms of the time of Quarenghi and Pushkin”.

Opening day of the All-Union Museum of A. S. Pushkin (Alexander Palace), on
10th June 1949

In 1951 a government decision handed the Alexander Palace to the Ministry of Defense. The Naval Department used the building as a top-secret, submarine tracking research institute of the Baltic Fleet. As a result, the former palace would be strictly off-limits to visitors for the next 45 years.

The palace’s stocks that were among the evacuated items in the Central Repository of Museum Stocks from the Suburban Palace-Museums passed to the Pavlovsk Palace Museum. A total of 5,615 items were moved from the palace to Pavlovsk. Of these, nearly 200 pieces were originally from the Alexander Palaces’ three ceremonial halls: the Portrait, Semi-Circular and Marble Halls. These include 39 pieces of porcelain, 41 paintings, 73 decorative bronze pieces, and 28 pieces of furniture.

It is also interesting to note that the Pavlovsk Palace Museum also have a large number of elegant evening gowns, dresses, shoes, hats, umbrellas, gloves, handbags, fans among other personal items of the Dowager Empress Maria Feodorovna and the Empress Alexandra Feodorovna, neither of whom ever resided in Pavlovsk. They are from the Alexander Palace, however, they are now on permanent display in the Museum of the Emperor’s Dress, which is located on the ground floor, of the northern semicircular wing of Pavlovsk Palace, the ground floor.

The Museum of the Russian Imperial Family in the Alexander Palace is expected to reopen at the end of 2019, or early 2020. Under restoration since August 2015, the new multi-museum complex will feature a number of reconstructed historic interiors of Nicholas II and Alexandra Feodorovna.