The Tsarskoye Selo State Museum Reserve have announced that the restoration of the Moorish Bathroom – one of the most unique interiors in the private apartments of Nicholas II in the Alexander Palace – is nearing completion.

The Moorish (also called the Emperor’s Toilet, Basseinaya) acquired its original appearance in 1896-1897 when the interior was redesigned by the Russian architect Count Nikolai Ivanovich de Rochefort (1846-1905). The most famous project of Count Rochefort is the Bialowieza Palace, an imperial hunting residence, built in Poland between 1889-1894. His innovative interior included a bathroom with a small bathing pool, which served as a model for designing the Moorish Bathroom for Nicholas II in the Alexander Palace.

The interior harmoniously combined bright oriental-style tiles that adorned the fireplace and walls around the pool, metlakh tiles, which were used for the floor in front of the pool, a coffered ceiling, an openwork maple partition and a Japanese reed mat on the walls. The floor was covered with a colourful carpet. Masters of the Meltzer Trading House made the furniture for the bathroom, which included a sofa upholstered in leather, with pillows and bolsters, two types of Oriental style stools, a table with a trellis, a washbasin on the underframe, a horizontal bar for gymnastic exercises, and stands for walking sticks and hunting rifles.

The main part of the Moorish Bathroom was a bathing pool that could hold 7 thousand buckets of water, and lined with white tiles, which gave the second name to the interior – Basseinaya. Its design in the Alexander Palace featured Charcot shower jets for massage.

For the functioning of the pool, the architect created a complex engineering system, it consisted of water and waste pipes, a water-heating boiler with accessories, three water tanks located in a special room on the ground floor of the palace, located directly under the Basseinaya.

There was also a toilet located outside the door at the edge of the corridor wall.

The Moorish Bathroom’s interior decoration was lost during the Great Patriotic War (1941-45). In the summer of 1997, a permanent exhibition was opened in the eastern wing of the palace dedicated to the imperial family. The former bathroom was used as an exhibition space with parquet floors, painted walls and a white ceiling. Therefore, the restoration of the Moorish Bathroom began practically from scratch.

In 2017, when dismantling the room, craftsmen discovered the Tsar’s bathing pool under the floor, and in it – a significant number of fragments of ceramic wall tiles, Metlakh tiles, belonging not only to the decoration of the Moorish, but also to other interiors of the residential half of the palace. The fragments provided restorers with the colour schemes of the interior decoration, which were reconstructed from black and white photographs taken in the 1930s. Thanks to this remarkable discovery, the restorers were able to recreate the wall cladding of the with the utmost precision.

Several fragments of the original tiles have been incorporated in the reconstructed Moorish Bathroom’s decoration; while the bathing pool and the steps leading into it have retained some of their historic tiling.

Also found during the restoration, several small fragments of the original frieze were revealed, which made it possible to clarify the colour scheme of the decorative painting, the drawing of which was determined from the black and white pre-war photographs.

In 2018–2019, the architectural elements of the interior decoration were recreated: wooden wall panels and ceiling cladding, wall tiles, a Moorish-style fireplace with decorative niches (they originally contained Faberge lamps, which were transferred to the Russian Museum in 1956), and a carved partition. The decoration of the toilet room has also been recreated. Curtains and a large carpet were made according to the historical documents and photos.

Thanks to the assistance of the Japanese Consulate General in St. Petersburg, an original mat similar to the one that adorned the walls of the Moorish Bathroom will soon be purchased in Japan.

At the moment, on the basis of existing museum inventory descriptions of 1938-1940, the design of non-preserved pieces of furniture and plumbing equipment (taps and mechanisms for introducing water into the pool) is currently underway. 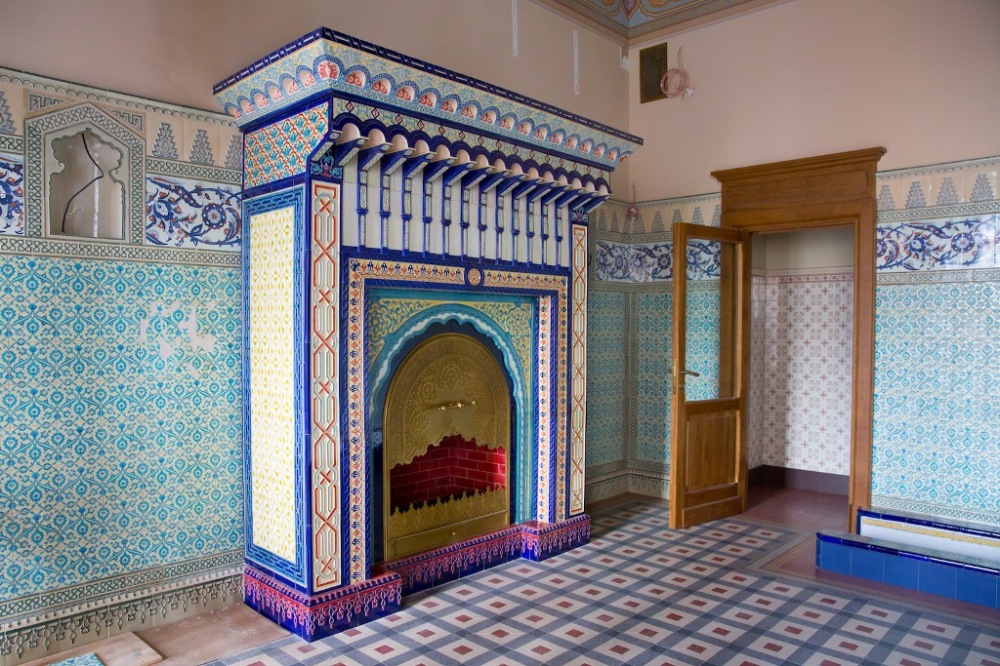 Click HERE to read my article Reconstruction of Nicholas II’s bathroom in the Alexander Palace + 13 PHOTOS, published on 16th June 2019

In the future, the Alexander Palace will become a memorial museum of the Romanov family – from Catherine the Great to Nicholas II, showcasing the private, domestic life of the Russian monarchs who used the palace as an official residence. The eastern wing of the palace will be known as the Museum of the Russian Imperial Family. The multi-museum complex is scheduled for completion no earlier than 2022.