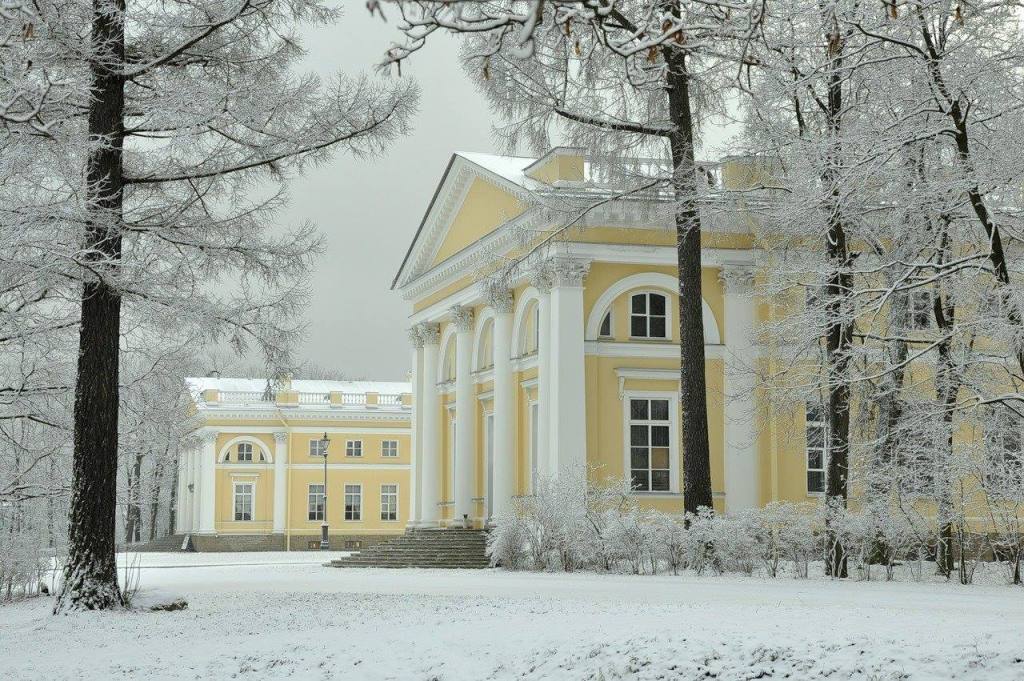 The former Imperial palaces of the Russian Imperial Family take on a whole new beauty in the winter months when they are covered and surrounded with a fresh blanket of snow. The favourite residence of Nicholas II and his family, the Alexander Palace at Tsarskoye Selo in particular. The elegant Neo-Classical edifice, painted a soft pastel yellow, blend perfectly with the surrounding winter landscape. A glorious sense of peace and tranquility are felt while walking around the palace and park at this time of year.

I have assembled the following collection of photos of the Alexander Palace and Park, all of which evoke a breathtaking Russian winter wonderland. After viewing these images, I am sure that you will agree that it is quite understandable why the Imperial Family so loved this place – PG 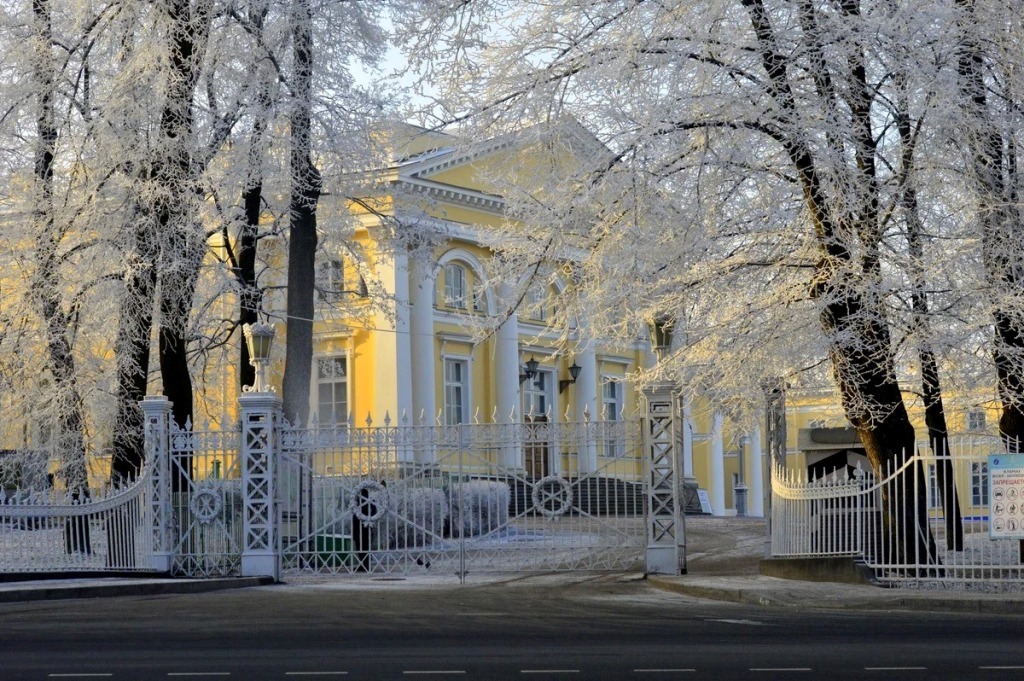 PHOTO: The main gate leading into the Alexander Palace at Tsarskoye Selo. The gate was installed in 1898, based on the design of the Russian architect (of Italian origin) Silvio Amvrosievich Danini (1867-1942). The view from the street has remained virtually unchanged since the early 20th century.

Following his abdication on 15 March (O.S. 2 March) 1917,”Colonel Romanov” passed through these gates to be reunited with his family. Together, they lived here under house arrest, until their exile to Tobolsk on 1st August of the same year.

PHOTO:  A lovely panoramic view which shows the expanse of the Alexander Palace from the opposite side of the pond.

The Alexander Palace was constructed in the town of Tsarskoye Selo, 30 miles south of St. Petersburg. It was commissioned by Empress Catherine II, who reigned 1762–1796, for her favourite grandson, Grand Duke Alexander Pavlovich, the future Emperor Alexander, who reigned 1801–1825), on the occasion of his marriage to Grand Duchess Elizaveta Alexeievna (1779-1826), born Princess Luise Marie Augusta of Baden in 1793.

The edifice was constructed between 1792 and 1796, by the foremost and most prolific practitioner of Neoclassical architecture in Imperial Russia, Giacomo Quarenghi (1744-1817). It was agreed that the architect had excelled himself in creating a masterpiece. In 1821, a quarter of a century later, the architect’s son wrote:

“An elegant building which looks over the beautiful new garden in Tsarskoye Selo, was designed and built by my father at the request of Catherine II, who shaped it with greatest simplicity, combining both functionality with beauty. Its dignified façade, harmonic proportions, and moderate ornamentation are also manifested in its interiors without compromising comfort in striving for magnificence and elegance.”

Emperor Nicholas II and his wife Empress Alexandra Feodorovna always loved this palace. After the events of Bloody Sunday in 1905, the August Coupled decided to make it their permanent residence.

During the reign of Nicholas II, the palace underwent many modern upgrades: it was wired for electricity and equipped with a telephone system. In 1899, a hydraulic lift was installed connecting the Empress’ suite with the children’s rooms on the second floor. With the advent of motion pictures in the early 20th century, a screening booth was built in the Semicircular Hall where the family gathered to watch films. 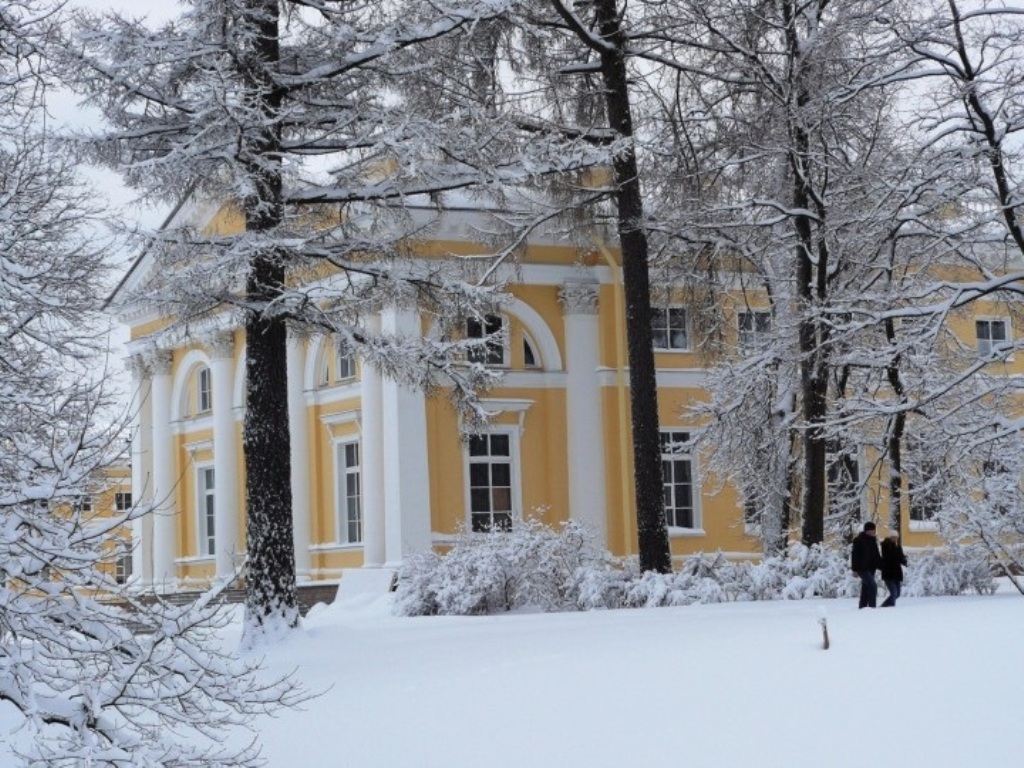 PHOTO: The eastern wing (left) is where the former private apartments of Nicholas II and Alexandra Feodorovna are located. The wing was closed in autumn 2015 for an extensive restoration. 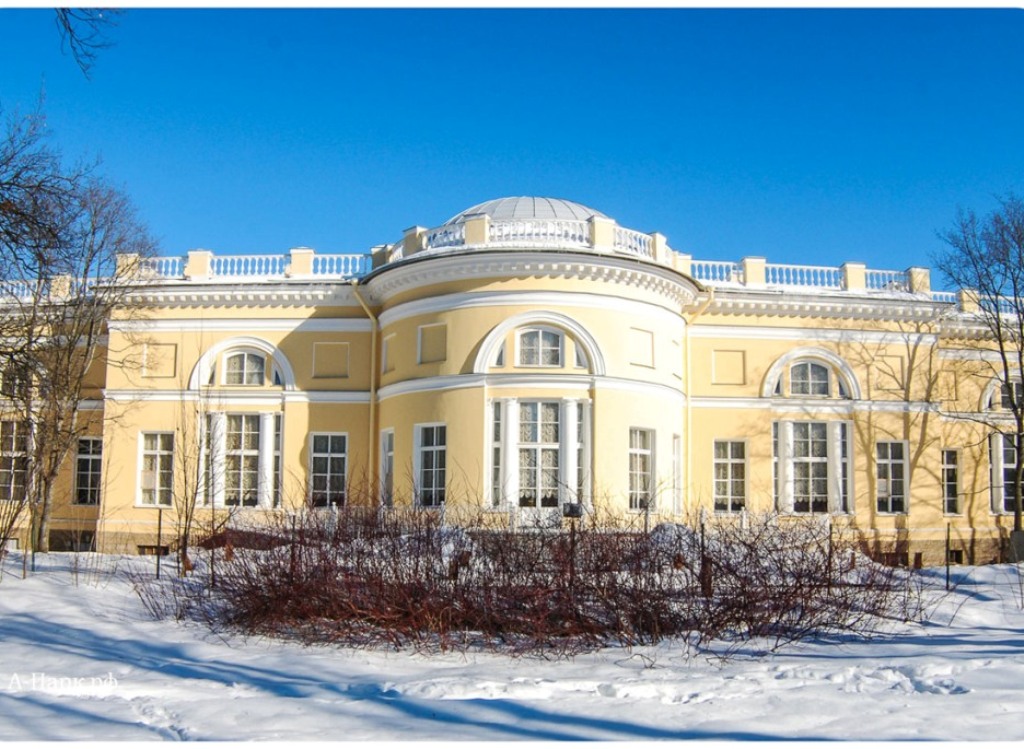 PHOTO:  Situated facing the Alexander Park are the windows of the Semi-Circular Hall. It is through these doors on 1st August 1917, that the Imperial Family and their retinue departed the Alexander Palace for the last time. They were transported to the Alexandrovsky Station, where an awaiting train took them into exile to Tobolsk in Siberia. It was in Tobolsk that the Imperial Family were held under house arrest in the former Governor’s Mansion – renamed the “House of Freedom” until April 1918, when they were transferred to Ekaterinburg and subsequently murdered by the Bolsheviks on 17th July 1918. 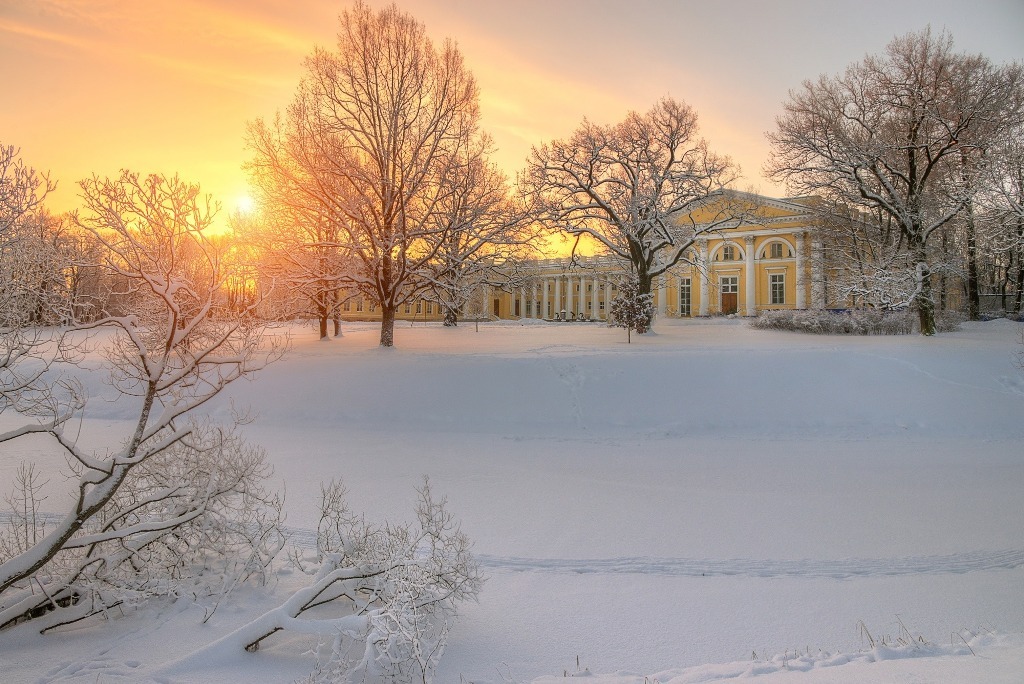 PHOTO: The warm glow from a winter sun simply adds to the beauty of the Alexander Palace surrounded by snow. During the winter months, Nicholas II took time to enjoy outdoor activities with his family. Together, they build snow fortresses, went skating on the ice covered ponds, and partook of sleigh rides through the park, a pastime in which the Empress also participated. In his zest for physical activity, the Tsar was often seen shoveling snow from the paths, chopped ice for the cellar, cut dry branches or old trees, storing firewood for the long, dark and cold winter months. 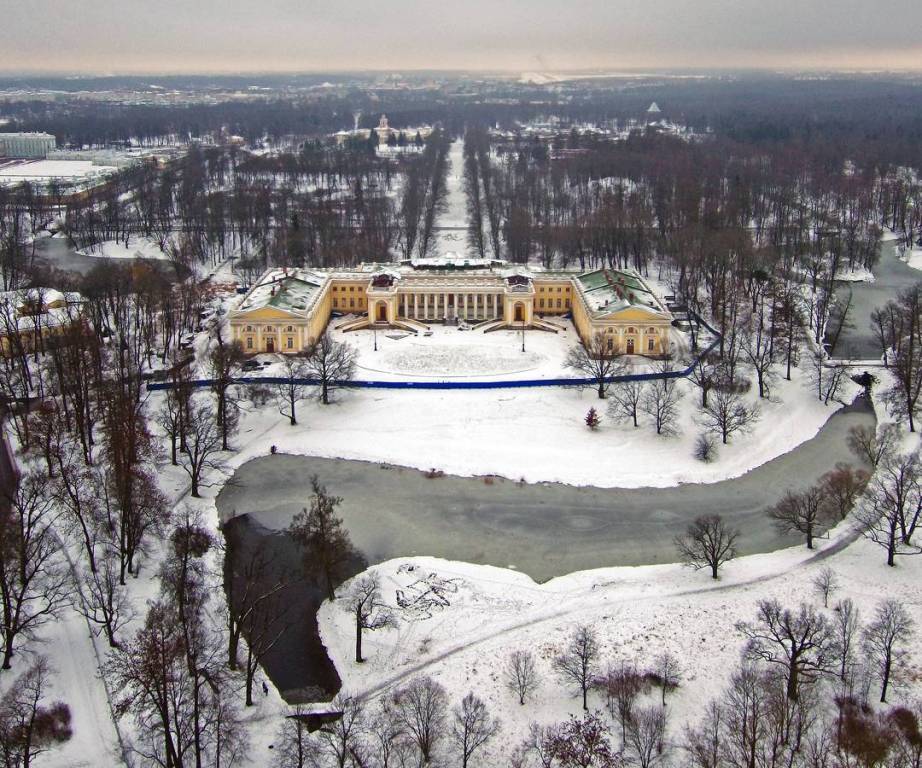 PHOTO: This aerial view of the Alexander Palace, taken by a drone, shows the size of the building. The photo was taken last year, during the ongoing restoration of the palace. The surrounding park offers pathways leading to the parks numerous pavilions, as well as ponds and canals, which were often used during the summer months by Nicholas II and his children for boating.

The Alexander Palace is within walking distance of the nearby Catherine Palace, which can be seen in the upper left hand corner of the photo above. 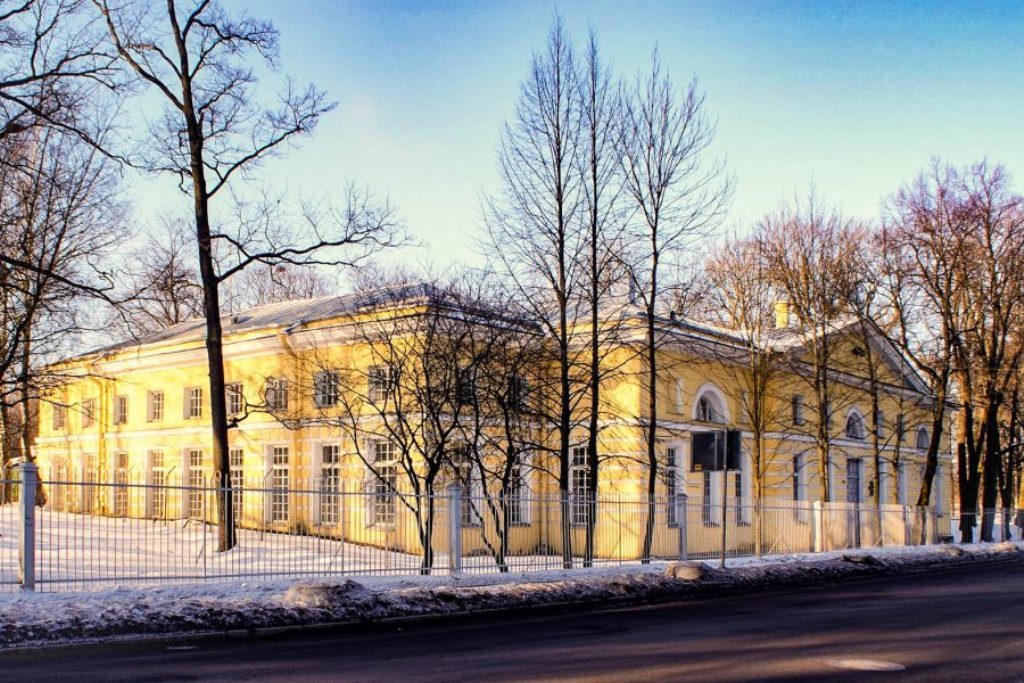 PHOTO: The Kitchen Building of the Alexander Palace at Tsarskoye Selo. Meals were prepared in this building, and taken to the palace through an underground tunnel.

When the restoration of the palace is completed in 2024, the former Kitchen Building will serve as the main entrance to the multi-museum Alexander Palace complex. 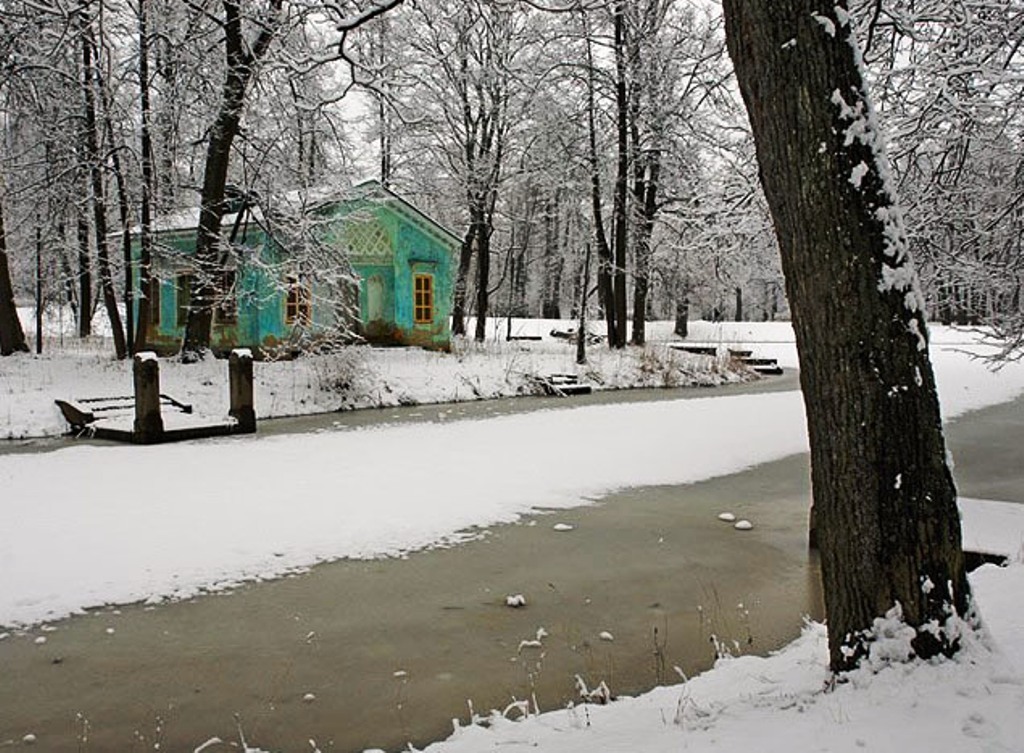 PHOTO: the Children’s Island, which features a tiny house built for the children of Emperor Nicholas I, and later enjoyed by the children of three successive monarchs: Alexander II, Alexander III and Nicholas II. To the left of the house is a small cemetery, where the Tsar buried his favourite dogs. The cemetery has survived to this day.

The island was reached by a pull-ferry, whereby sailors would pull ropes sending the ferry over to the island and back from the park’s shore.

During two winter visits to the Alexander Palace, the author of this article managed to walk across the frozen pond to explore the island, and photograph both the house and the cemetery at close hand.

According to the Tsarskoye Selo State Museum, there are plans to eventually restore the Children’s Island and Pavilion, once funding has been secured. 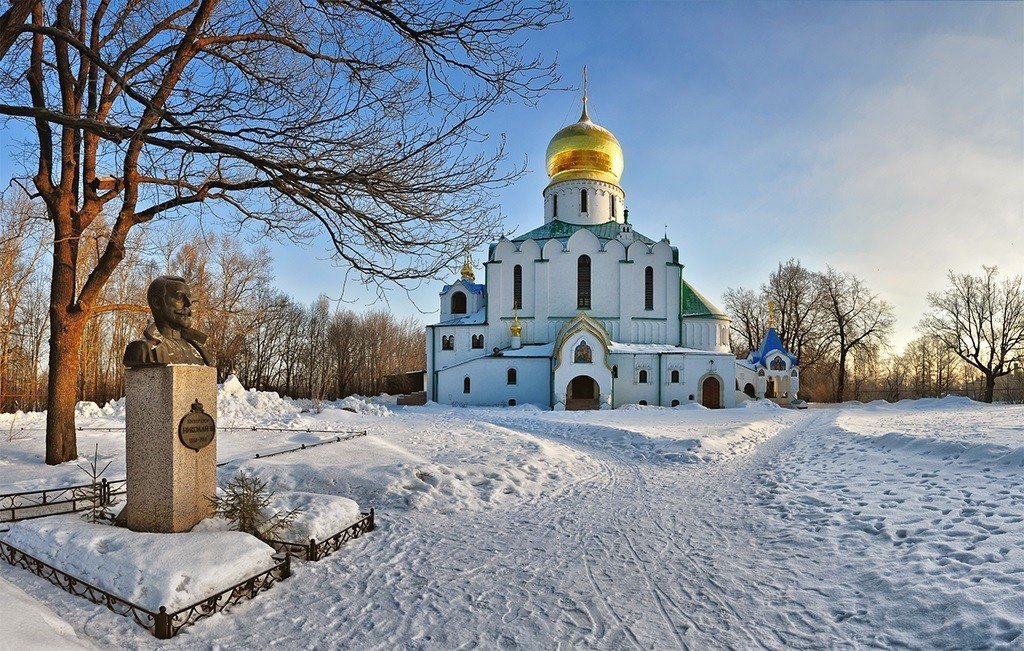 PHOTO: Just a short walk from the Alexander Palace is the Feodorovsky Sovereign Cathedral, with its beautiful Russian national-style edifice and magnificent interiors, including the Cave Church.

On 2 September (O.S. 20 August) 1909, Emperor Nicholas II laid the first foundation stone for the Feodorovsky Sovereign Cathedral, which later served as the household church of the Imperial Family.

After the 1917 Revolution, the cathedral was closed, it was badly damaged during the Great Patriotic War (1941-44). In 1991 the cathedral was transferred to the Russian Orthodox Church, restoration of the Cathedral lasted nearly 20 years..

On 17th July 1993, hundreds of Orthodox Christians and monarchists gathered for the official opening and consecration of the first monument to Emperor Nicholas II (seen on the left in the photo) to be established in post-Soviet Russia.

The monument was consecrated on the day marking the 75th anniversary of the murder of Nicholas II, on the grounds of the Feodorovsky Sovereign Cathedral. The monument is the work of St. Petersburg sculptor Victor Vladimirovich Zaiko (born 1944). 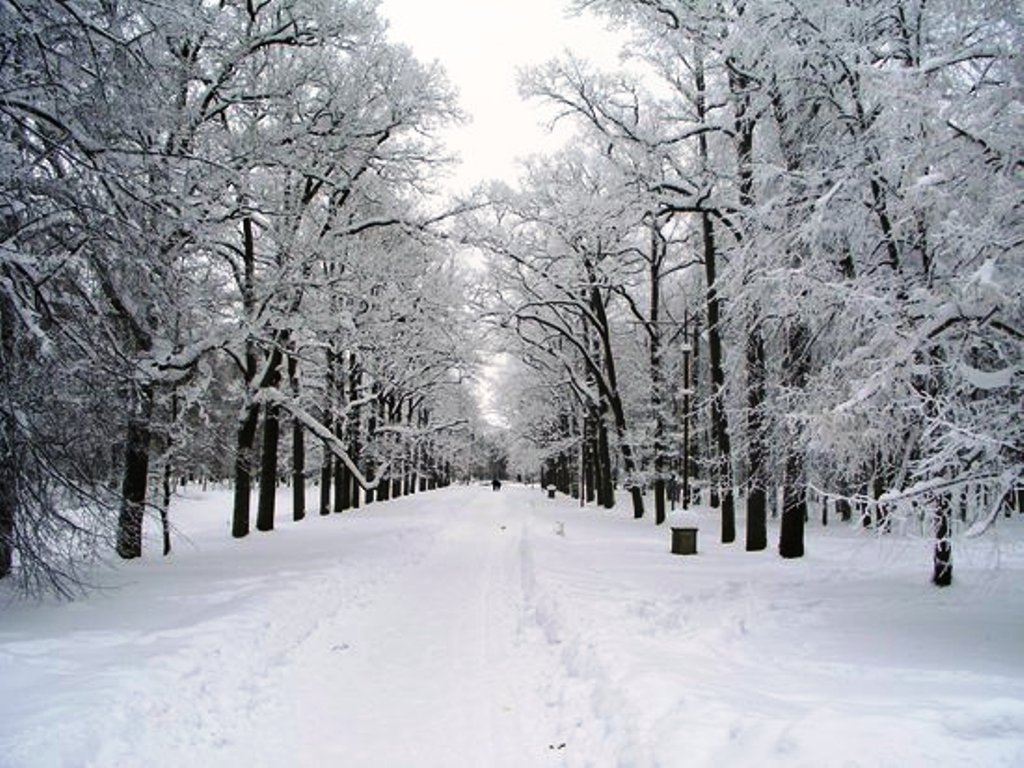 PHOTO: A walk through the snow covered Alexander Park at Tsarskoye Selo offers many surprises for visitors. Over the course of the past decade, numerous pavilions have been beautifully restored, including the Sovereign’s Martial Chamber, the Arsenal, the Chapelle, and the White Tower.

In addition, some people may want to visit the gravesite of Grigorii Rasputin (1869-1916). His body was buried on 2 January (O.S. 21 December) 1916, at a small church (has not survived) that Anna Vyrubova (1884-1964) had been building in the Alexander Park. His body was exhumed and burned by a detachment of soldiers shortly after the Tsar abdicated the throne in March 1917.

There are future plans to restore the Children’s Pavilion and Island, the Chinese Theater, the Pension Stable, the Farm as well as the reclamation of the Alexander Park. There are plans to charge for entry to the park, the funds of which will help restore these historic buildings and maintain the grounds, however, this additional cost has yet to be implemented.