Writer Alexander Solzhenitsyn (1918-2008) once said that if it were not for the church schism of the 17th century, the revolution of 1917 would not have happened. Some modern historians believe that the writer was correct in the literal sense and that the Russian Old Believers played a significant role in the political cataclysms of the early 20th century.

By the end of the 19th century, the Old Believers held considerable material resources in their hands. “The entire Russian market was dominated by the Old Believers,” says A. V. Pyzhikov, a doctor of historical sciences, and author of the book Грани русского раскола (The Edge of Russian Schism). Merchant dynasties among the Old Believers began to emerge in the era of Catherine II, who encouraged free enterprise.

The Old Believers held a fair share of the national income, particularly in Russia’s vast raw materials and manufacturing industries. They also owned banks, railways, and shipping companies. The Old Believers firms received state orders, including the manufacture of weapons.

At the turn of the 20th century, not all Old Believers dared to confess their religious affiliation openly (their actual numbers far exceeded that indicated in official documents), for fear of persecution.

In 1905, Emperor Nicholas II signed an act of religious freedom that ended the persecution of all religious minorities in Russia. The Old Believers gained the right to  build churches and monasteries, to ring church bells, to hold processions and to organize themselves. It became prohibited (as under Catherine the Great—reigned 1762–1796) to refer to Old Believers as raskolniki (schismatics), a name they consider insulting. People often refer to the period from 1905 until 1917 as “the Golden Age of the Old Faith”. One can regard the Act of 1905 as emancipating the Old Believers, who had until then occupied an almost illegal position in Russian society. Nevertheless, some restrictions for Old Believers continued: for example, they were forbidden from joining the civil service.

On 16 April 1905, divine services were allowed in the Old Believer churches of the Rogozhsky cemetery in Moscow. On 19 April, Emperor Nicholas II wrote in his diary: “I christened myself with the Old Believers.” 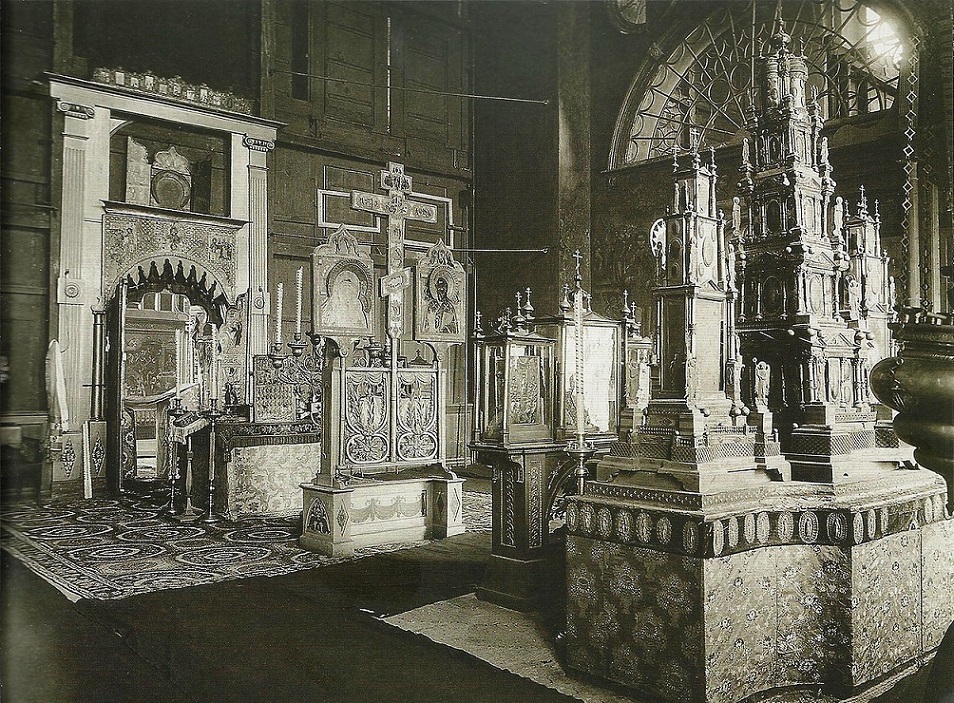 The altar of the Old Believer Pokrovsky Cathedral, Rostov-on-Don. 1905

The attitude of Old Believers to autocracy

It is widely believed that, without exception, the Old Believers hated the Imperial House of the Romanovs to the depths of their hearts. It is not hard to substantiate this point of view, since the schism of 1650–1660, which had driven the followers of the old rite underground during the reign of Tsar Alexei Mikhailovich (1645 to 1676), and lasted for more than three centuries.

The Old Believers, referred to Tsar Peter I as “the Antichrist” (although, the persecution of the schismatics was far less severe than during his father’s reign), but any Romanov on the throne, up to the early 20th century, was regarded likewise.

But even educated citizens, businessmen, publishers, politicians, who observed the strict archaic and patriarchal structure characteristic of the Old Believers in their homes, were hardly guided in their thoughts and actions for historical and religious reasons.

They were modern practical people who, like many in that era, believed that the social structure of the country conditioned by the autocracy hampered its development, including the development of its economy and business.

The manifestos of 1905 “On the improvement of the state order” and “On the establishment of the State Duma”, thanks to which Russia had its own parliament for the first time, together with the Tolerance Ordinance, gave some Old Believers hope of a better future. However, some believed that there would be no changes, and that things would return to the old ways.

O. P. Ershov, a researcher on the history of Old Believers, writes that in 1917 one of the regional meetings of Old Believers recognized the autocracy incapable of ensuring the rights granted by the Tolerance Ordinance and not in the interests of the people. This case was not an isolated one.

The relation of the autocrat to the Old Believers

The question of how Nicholas II really treated the Old Believers remains open. A number of researchers of the Old Believers, including the historian and literary critic MA Dzyubenko, believe that the emperor sympathized with them and even hoped to unite the two branches of the Russian Church, but there is no direct evidence of this.

An indirect argument is, for example, Nicholas II’s interest in Neo-Byzantine church architecture and music, which may well be explained for aesthetic and partly diplomatic reasons. Moreover, it is extremely doubtful that most Old Believers would have taken the idea of ​​uniting with the Russian Orthodox Church with any enthusiasm.

The participation of Old Believers in the preparation of revolutionary events

In all likelihood, the theory gaining popularity in recent years that Old Believers were perhaps the main driving force of all three Russian revolutions is greatly exaggerated. However, the fact of the participation of the Old Believers in the revolutionary movement is indisputable.

Since the end of the 19th century, they were in active contact with various groups of the political opposition. According to the historian Pyzhikov, “the Orthodox Slavophile merchant elite is moving towards a liberal-constitutional path.”

For wealthy people, who also had access to the communal capital of the Old Believers, the most simple and convenient way to influence the events was the financing of the opposition. The most famous example is the manufacturer and philanthropist Savva Morozov, for whose money the Iskra social-democratic newspaper, the Bolshevik publications The Struggle and the New Life were published.

In addition, Morozov supplied his own workers with prohibited literature and was the author of the note “On the Causes of the Strike Movement. Requirements for the introduction of democratic freedoms”. He penned it in January 1905, a few days after Bloody Sunday, in the hope that it would be supported by the other shareholders of the Nikolskaya manufactory, which did not happen. It is also known that Savva Morozov’s funds secretly purchased weapons for the Bolsheviks.

Many Old Believers or people from Old Believer families themselves were members of opposition parties in the Duma and other factions. Often these same people who held important government positions before the February Revolution became members of the Provisional Government afterwards, allowing for assumptions to the “revolution came from above” theory.

Thus, one of the leaders of the Progressive Party A. I. Konovalov, a member of the Fourth State Duma (15 November 1912 – 6 October 1917), later occupied the post of Minister of Trade and Industry in the Provisional Government. His closest associate, P. P. Ryabushinsky, publisher of the newspaper “Morning of Russia”, was a member of the State Council and chairman of the Military Industrial Committee. The founder of the party “Union on October 17” and the chairman of the Third State Duma (7 November 1907 – 9 June 1912) A. I. Guchkov became the Provisional Government’s Minister of War and Navy.

Many Old Believers greeted the establishment of the Provisional Government with sincere joy. Thus, the magazine Слово Церкви (Word of the Church), published the greeting of the monks of the Transfiguration Monastery: “I firmly believe the brethren of your wise government, that you will try to improve everything for the good of the motherland and fatherland, and to enlighten the Russian land.”

As we know, the Provisional Government failed to cope with these tasks. In August 1917, an obvious fact was stated at a meeting held at the Bolshoi Theater: “the situation was hopelessly out of control.”

After the October Revolution, almost all the Old Believers lost their fortunes, while many others lost their freedom or their life. Those who succeeded, emigrated. Some, such as Guchkov and Konovalov, continued their political and social activities in Europe.

Note: Many congregations emigrated to the United States, where their descendants still live, observing the ancient customs of the Old Believer’s Church. 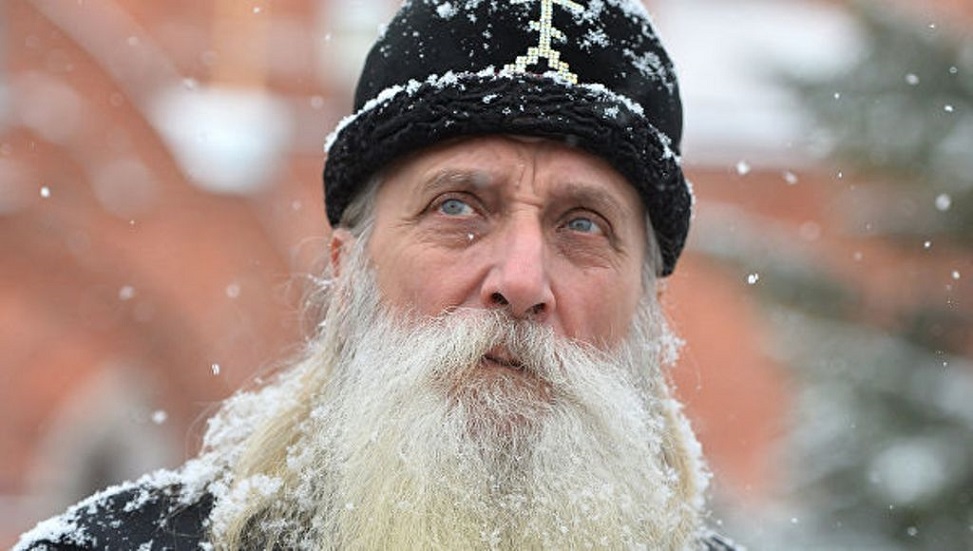 The Old Believers View of Nicholas II in Post-Soviet Russia

During an interview with the Ekaterinburg media 66.ru, the head of the Russian Orthodox Old Believer Church, Metropolitan Cornelius, was asked:

66.ru – In July, “Tsar’s Days” took place in Yekaterinburg, timed to coincide with the execution of Nicholas II and his family. The Patriarch of Moscow and All Russia Kirill came to us, who declared the guilt of the whole people in the death of the tsar . What is the attitude of the Old Believer Church to the personality of Nicholas II? Why do you think these events happened a hundred years ago in the Urals?

Of course, the murder of the entire royal family and Nicholas is a tragedy, this should not have taken place. Alexander Solzhenitsyn very wisely said about this: the 17th century spawned 1917. Who ruined the church and beat the priests? Russian people themselves. Not the French, not the Germans, not the British, but the Russians, who had lost the foundations of their faith after a church schism. It was then that the destruction of the foundation of the faith began, Russia turned to the West, the Church lost its primacy: an official began to rule the church instead of the patriarch. As a result, godless people came to power, killed the tsar and destroyed everything. To prevent this from happening, we need to return to our foundations, our religion.