Photo: Emperor Nicholas II, Metropolitan of Kiev, members of the imperial family including Empress Alexandra Feodorovna and her five children, and Crown Prince Boris of Bulgaria

Photo: Emperor Nicholas II, Empress Alexandra Feodorovna, Grand Duchesses, members of the Clergy at the tomb of Iskra and Kochubey, in the Kiev Pechersk Lavra

The monument to Alexander II was located in the central part of Kiev, on Tsarskaya Square at the entrance to the Merchants Garden.

The monument consisted of three pedestals. On the central tower stood a bronze statue of the emperor. He was depicted in full height in a uniform and a mantle thrown over his shoulders, in his right hand he held the Manifesto on the abolition of serfdom, his other hand resting on the arm of his throne. Around the monument on the lower pedestal was a bas-relief depicting peasants – representatives of the peoples of the empire in national costumes, among which stood out the figure of a woman in traditional Russian costume symbolizing Russia.

The central pedestal was decorated with the emblem of the Russian Empire – a two-headed eagle – and the inscription: “The South-Western Territory is grateful to the Tsar-Liberator. 1911″. In front of the flank pedestals, sculptural compositions of Mercy and Justice were installed. All three pedestals were united by a wide pediment with bas-reliefs depicting individual moments of the emperor’s life and work. The pedestal was made of pink granite, the steps of grey granite. Imperial bronze crowns were installed on the side ledges of the steps 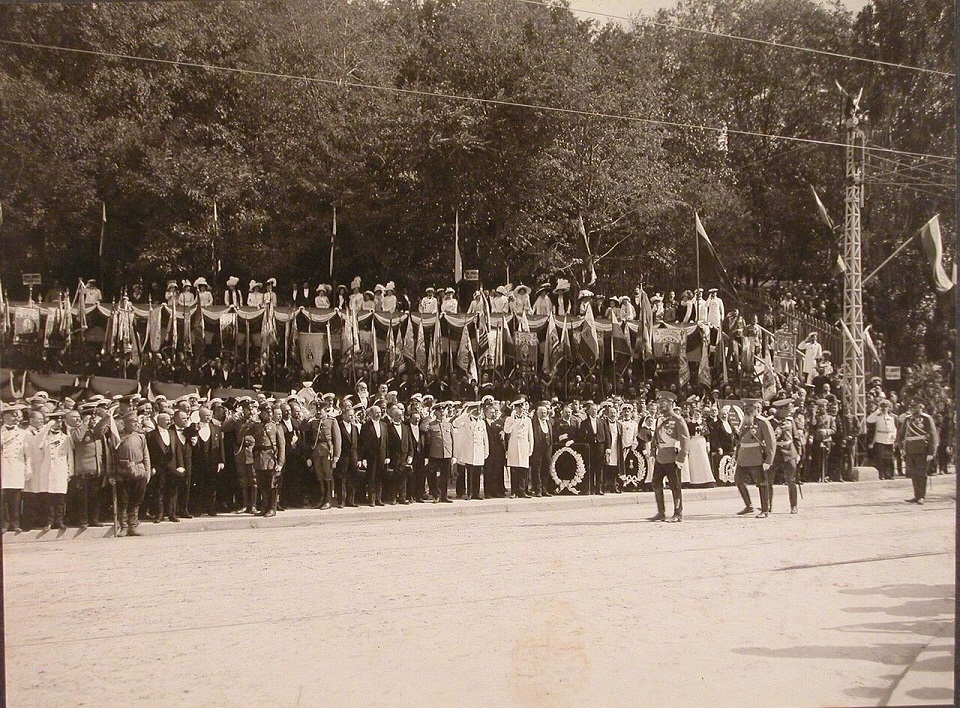 Photo: Participants at the opening ceremony of the monument before the parade

Photo: The mayor of Kiev brings the traditional bread and salt to Emperor Nicholas II

Photo: A moleben is performed at the monument to Emperor Alexander II

A visit to Kiev by Emperor Nicholas II with his family and members of the Imperial Court was scheduled for August 1911. The delegations prepared a special program of events during their stay in Kiev, including solemn prayers, theatre visits, troop reviews, a walk along the Dnieper to Chernigov among other events. The main event of the program and the main purpose of the tsar’s visit to Kiev was the opening of the monument to Alexander II on Tsarskaya Square.

The construction of the monument to Alexander II was completed. Triumphal arches were built. The streets and the facades of buildings were richly decorated with flags, wreaths and buntings. Troops of the Russian Imperial Army arrived in the city to participate in manoeuvres.

Nicholas II arrived to open the monument to his grandfather in late August 1911. The ceremony itself took place on 12th September (O.S. 30th August) 1911), the day of memory of the Holy Prince Alexander Nevsky, in whose honour his emperor grandfather Alexander Nikolaevich was named. The monument was opened in the presence of Emperor Nicholas II and members of his family, Prime Minister Pyotr Stolypin , Chief Prosecutor of the Holy Synod Vladimir Sabler , chief of the gendarmes Kurlov, Minister of Education Kasso, son and heir of Tsar Ferdinand I of Bulgaria, government and Court officials, representatives of the Austro-Swedish and Swiss consulates. During the festivities, citizens received postcards with photographic reproductions of the monument.

Sadly, the celebration on the occasion of the unveiling of the monument in Kiev was overshadowed by the assassination of Prime Minister Peter Stolypin, whom the terrorist Social Revolutionary Dmitry Bogrov shot dead on 14 (O.S 1 September 1911.

Work on the improvement of the monument continued after its opening. In particular, in July 1914, elegant bronze grates were installed, decorated with state emblems, and a parterre lawn was built around the monument. The monument was illuminated by four lamps.

Photo: Emperor Nicholas II and members of the City Duma at the monument to Emperor Alexander II 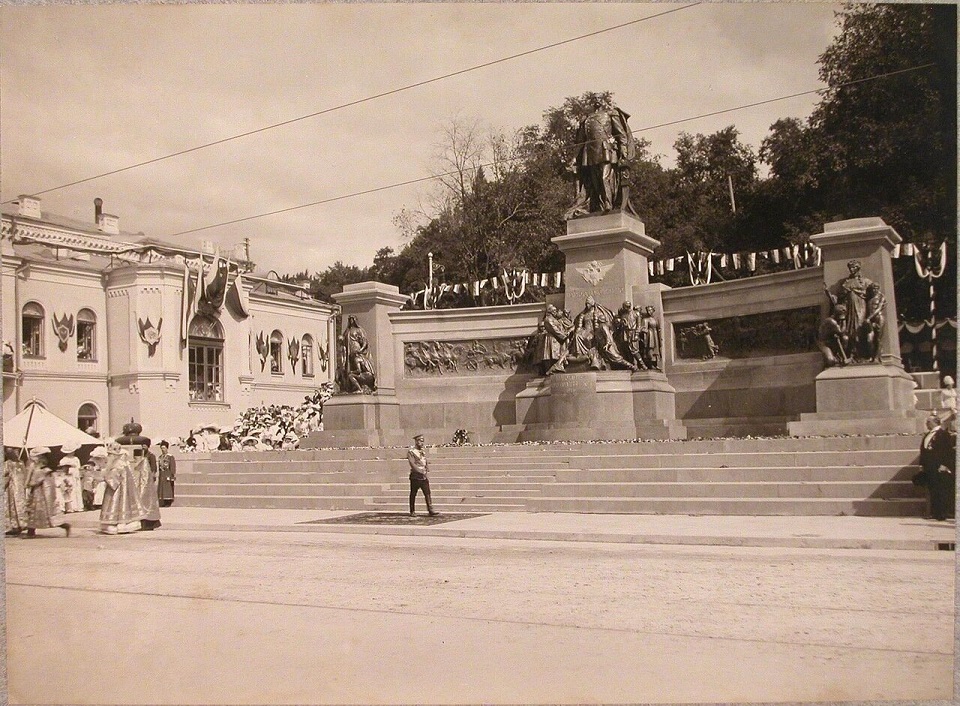 Photo: Priests and Emperor Nicholas II at the monument to Emperor Alexander II

Destruction by the Soviets

The monument as part of the city’s history was a short one, ending nine years after its consecration. In April 1919, the Bolshevik city newspaper raised the question of liquidating the monument to Alexander II by 14 (O.S. 1 May), but the plan failed, and the monument was covered with a large black drape. The tsar’s figure was removed from the pedestal in November 1920, while all the metal parts were dismantled and sent to the Arsenal smelting plant.

The preserved pedestal of the monument has long been used by the Bolsheviks as a propaganda tool. In particular, in place of the tsar, an eight-meter figure of a Red Army soldier made of plywood in a Budenovka coat, overcoat and a rifle in his hands was installed. This work was called the “Monument to the Red Army – Defender of the Masses.” There were plans to replace the Monument to the Red Army, and replace it with a monument to the October Revolution on this site, however, the project never came to fruition.

In 1932, the city authorities decided to dismantle the pedestal, which had previously been designed as a decoration for the entrance of the Proletarian Garden. At the end of the 1930s, a cascade of fountains was built here and a statue of Joseph Stalin was installed. After the liberation of Kiev from Nazi troops, the statue of Joseph Stalin was restored; while the square itself was renamed in honour of Stalin (on the eve of his 65th birthday in December 1944). But this lasted only until the decisions of the XX Congress of the CPSU in 1956. Since that time, no monuments stood in the park. Now where the monument to Alexander II stood, the entrance to Khreshchaty Park is located, there are pedestrian sidewalks, a small amount of green space, an entrance to the underpass, advertising signs.