A computer generated reconstruction of the Ipatiev House

On 26th November 2019, I published my article ‘Doomed to Resurrection: Is it Possible to Reconstruct the Ipatiev House?’

The article pertains to an interview with the head of the Department of Archives of the Sverdlovsk Region Alexander Alexandrovich Kapustin who in July 2018, proposed that the Ipatiev House (demolished in September 1977) should be reconstructed in Ekaterinburg.

Given that the Church on the Blood now stands on the site of the former ‘House of Special Purpose,’ Kapustins’ idea left a lot of people questioning both “Why reconstruct it?” and “Where to reconstruct it?” 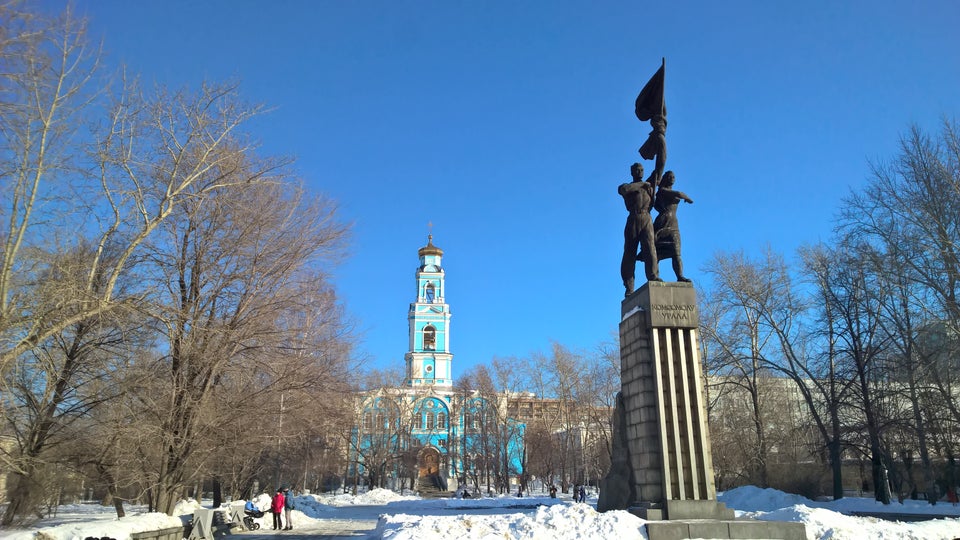 The monument to Komsomol (Young Communists League) of the Urals dominates Komsomolskaya Square, the Church of the Ascension in the background

While I personally am NOT in favour of reconstructing the Ipatiev House, I do believe I can recommend the perfect location!

Situated at the top of Ascension Hill is Komsomolskaya Square. It is located between the Church of the Ascension and the Church on the Blood, which is situated on the opposite side of Karl Liebknecht Street.

During the Imperial Family’s captivity from April to July 1918, the windows on the upper floor of the ‘House of Special Purpose’ (the Ipatiev House) were painted white. Through a crack at the top of one window, it was possible for them to see the gilded spire of the Church of the Ascension.

The Church on the Blood is situated on the other side of Karl Liebknecht Street,
facing Komsomolskaya Square and the Komsomol monument

Before the Revolution, it was named Voznesenskaya (Ascension) Square after its location on Ascension Hill. In 1919, the old name was replaced by a new, rather sinister name – People’s Revenge Square. The name reflected the squares’ proximity to that of the Ipatiev House, of which its eastern façade faced the square, and the site of the regicide of 17th July 1918. In 1959, the square was renamed again as Komsomolskaya Square.

Dominating the square is the enormous monument to Komsomol (Young Communists League) of the Urals built during the Soviet years. The monument stands defiantly, almost mockingly at the Church on the Blood situated on the opposite side of the street.

Each year, beneath the shadows of the Churches of the Ascension and the Spilled Blood, young Communists continue to hold rallies on the square.

It is my understanding that the reconstruction of the Ipatiev House as a multi-functional museum has the support of the Ekaterinburg Eparchy, so “IF” the project ever gets the green light, I cannot think of a better location.

As noted above, I do not support the idea of reconstructing the House of Special Purpose in Ekaterinburg. As one reader aptly noted on my Facebook page, “the Ipatiev House to me was rebuilt. It was rebuilt as a church. A place of reflection to bring light into the darkness that fell there.”