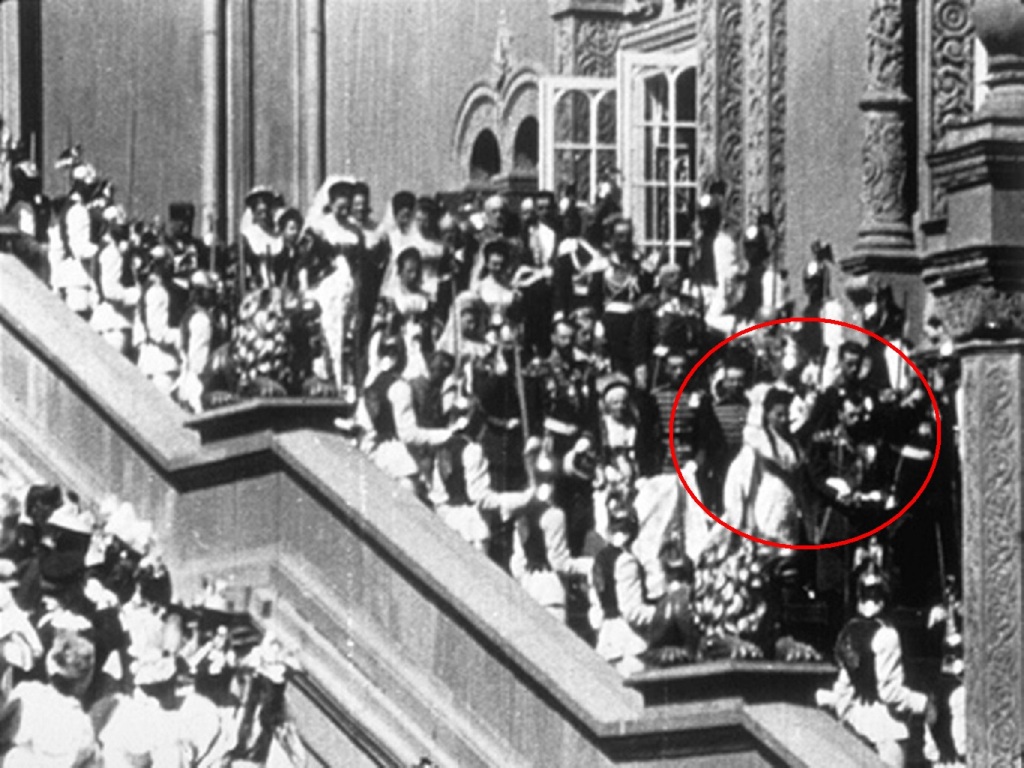 PHOTO: still from the Lumiere Bros. film documenting the 1896 Coronation.
Emperor Nicholas II, Empress Alexandra Feodorova and their retinue
are seen slowly descending the Red Staircase of the Moscow Kremlin

The Russian State Archive of Film and Photo Documents RGAKFD is the world’s largest and oldest public repository of audiovisual documents. In 2019, the archive celebrated its 100th anniversary.

To date, it holds more than 45,000 titles of film documents, more than one and a half million original photographic documents from 1850 to the present: these include daguerreotypes, ferrotypes, and albums, including those belonging to the Imperial Family, and negatives on glass and film, and modern digital photographic images.

The existing collection of film documents of pre-revolutionary Russia, stored in the RGAKFD, was formed from newsreel-documentary materials requisitioned by the Soviet authorities during the nationalization of the film industry from the warehouses of film factories and film companies.

In total, the archive currently contains about 960 pre-revolutionary newsreels, including the first full-length documentary-film made in Russia – the Coronation of Emperor Nicholas II in 1896.

In May 1896, French cameramen from the Lumiere Brothers (Paris) company arrived in Moscow, to film the coronation ceremony of Emperor Nicholas II. On 5th May 1896, the Moscow newspaper Новости дня [News of the Day] wrote: “among the correspondents who have arrived in the city is Camille Cerf for the coronation of Nicholas II. Sent to Moscow on behalf of Louis Lumière, he is armed with a very interesting device – a cinematograph … He will film the entire solemn procession of the route on a special moving belt, on which the pictures will, however, be so microscopic that only after enlarging them can they can be seen. But, in any case, all parts of the tuple and all of its moments will be reproduced in this way with documentary accuracy.” The coronation celebrations in the Kremlin were captured in great detail.

A copy of the film of the coronation celebrations was presented by Lumiere to Emperor Nicholas II and, apparently, met with his approval. In any case, it laid the foundation for a special kind of pre-revolutionary Russian newsreel, the so-called “Tsarist Chronicle”, which was filmed in Russia systematically from 1896 to 1917, mainly by Russian cameramen, for distribution to the growing commercial cinema network across the Russian Empire.

The Lumiere Bros. film The Coronation of Emperor Nicholas II was filmed in 35 mm, duration 1 hour 33 min. The video below shows only 1 minute and 40 seconds of it. More than a decade ago, a Ukrainian historian announced plans to restore the entire film. Sadly, he was unable to acquire funding for this important historical project.

The following is a list of the highlights of the video:

2. Common. 10.1 m On the streets of Moscow, ceremonial gilded carriages, accompanied by their retinue, pass. In the first carriage sits Empress Alexandra Feodorovna, (removed from the building of the Historical Museum). Cinematographer Francis DOUBLIER . CL No. 1329.

3. Common. 4.8m Emperor Nicholas II and Empress Alexandra Feodorovna, accompanied by the courtiers, walk up the stairs of the Red Porch, down to Ivanovskaya Square to the Assumption Cathedral, (filmed from the side of the Annunciation Cathedral from the height of the roof of the temporary stands).
Operator Charles MOISSON . CL No. 1330.

4. Common. 7.8 m Emperor Nicholas II and Empress Alexandra Feodorovna leave the Archangel Cathedral, join the solemn procession and under a canopy, accompanied by the courtiers, walk towards the porch of the Annunciation Cathedral. Cinematographer Francis DOUBLIER . CL No. 1331.

PHOTO: Ernest Louis, Grand Duke of Hesse (seated center) with members
of the Hessian delegation, who attended Nicholas II’s Coronation in May 1896

The Empress’s brother, Ernest Louis, Grand Duke of Hesse (1868-1937), who was present at the coronation ceremony, provides a vivid description of the event:

“The coronation in Moscow on May 26, 1896 was the most splendid ceremony I have ever seen. It was almost eastern in style and lasted 10 days. In Moscow, the cathedral was full of images of saints on a gold background, and all the priests were wore golden vestments, decorated with embroidery and precious stones. In all the ceremonies, there was a deep mystical meaning and Byzantine traditions. The Anointed Emperor and Empress became God’s Anointed ones. The emperor, like a priest, receives communion at the altar. After that, in front of the throne, he takes off the crown from his head, kneels down and prays aloud with a wonderful prayer for his people. Then they say a prayer for the emperor, and he rises, and at that moment he is the only non-kneeling person in the entire Russian Empire. The procession of people entering and leaving the cathedral passes along the elevation, which is at the level of the heads, standing around, so you can see everyone who takes part in the ceremony. The procession seems to consist only of people in full dress, everything glitters in gold and silver, the emperor and empress in gold and ermine robes stand under a huge canopy, all the grand duchesses are strewn with jewels. Everything happens as in a magical dream, because everything is illuminated by the bright radiance of the sun.”

If you enjoy my articles, news stories and translations, then please help support my research by making a donation in US or Canadian dollars to my project The Truth About Nicholas II – please note that donations can be made by GoFundMe, PayPal, credit card, personal check or money order. Thank you for your consideration – PG