On 16th February 2019, historian Peter Multatuli, Ph.D., arrived in the Urals to present a unique project. Multatuli, who is considered the country’s leading authority on the life and reign of Nicholas II, talked with local historians about the myths surrounding Russia’s last tsar, about his achievements and reforms in particular.

The presentation of the new web site “The Russian Empire in the Era of the Reign of Emperor Nicholas II ” («Российская империя в эпоху правления императора Николая Второго») took place in the multimedia museum “Russia – My History” in Ekaterinburg.  The event was hosted by the Club of Historians, a joint project of the St. Catherine Foundation and the History Park.

“The St. Catherine Foundation took part in the Tsar’s Days events held in Ekaterinburg in July 2018, and the presentation of this new site is the completion of the Imperial Year. This site is not about the Tsar’s family, it is about the many achievements of the Russian Empire during the reign of the last Russian sovereign,” noted Tatyana Balanchuk, project manager of the St. Catherine Foundation.

“It was one of the greatest epochs of reforming the country” added Peter Multatuli – “the country that the emperor accepted in 1894, and the country which he was forced to give up in 1917, were very different countries. Everything was not perfect, however, more reforms were carried out in Russia under Emperor Nicholas II,  than that undertaken by either Peter the Great and Alexander II.”

The new site is based on the calendar “Russia in the Rra of the Reign of Emperor Nicholas II”, released last year. It has fact-filled sections detailing the essence of reforms under Nicholas II, as well as debunking the many myths which exist to this day about his reign. “We realized that we needed a more complete source of information, and launched a website which details the achievements and reforms during the reign Nicholas II,” added Balanchuk.

The site became part of a large project organized by the St. Catherine Foundation: in conjunction with the multimedia museum Russia – My History, outdoor events, as well as workshops and lectures on late 19th and early 20th century Russian history. The site was launched in September 2018 and aroused great interest among a wide audience of more than 600 thousand people.

Peter Multatuli, Candidate of Historical Sciences, gave a presentation lecture at the Saturday event. He noted, that “myths are designed to ignore facts, and to defame the last Russian tsar.” For example, the events of 9th January 1905 (Bloody Sunday) were not a planned punishment of the “insidious ruler over the unhappy workers.”

Multatuli went on to state that “although the city at the time of the execution of the Romanovs bore the name of St. Catherine, in fact it already belonged to Yakov Sverdlov.”

“Yekaterinburg was the patrimony of Sverdlov and his henchmen — including  Yakov Yurovsky and Filipp Goloshchekin. These were Sveredlov’s devotees during 1905–06, when he organized a revolutionary gang that engaged in looting, murder and expropriation,” said Multatuli.

Speakers also talked about the importance of preserving the historical names of cities. According to Tatyana Balanchuk, project manager of the St. Catherine Foundation, “the topic of preserving names and toponymy is very relevant now.”

“Russian cities were often named in relation to what was produced in a city, such as in honor of the heavenly patron or in honor of a river, which flows nearby, etc.” said Multatuli. “Many names which reflected the Tsarist era were changed after the 1917 Revolution. Many streets named after prominent figures of Russian history are forgotten, instead they reflect those from the Soviet period.”

The historian noted that the original names, which were assigned to the streets at the time of their creation at one or another period of history, could tell a lot about the history of this place, and history needs to be studied in order to educate a citizen in a person who will be responsible for his country . 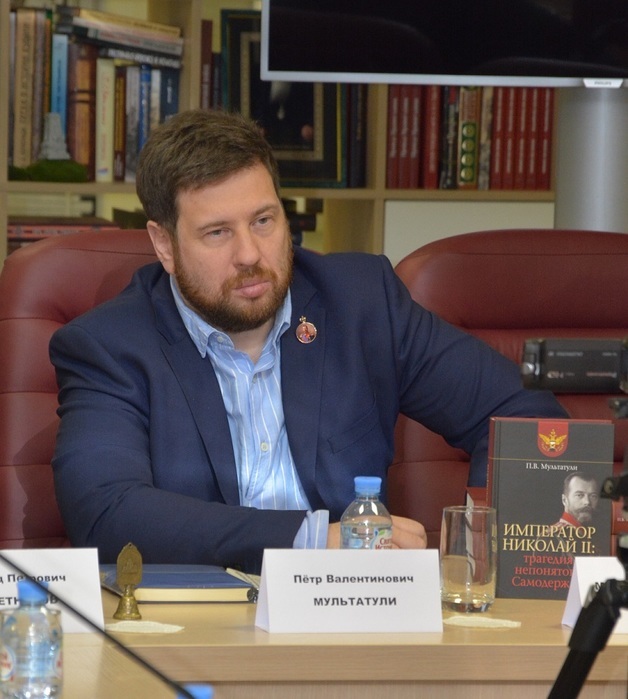 Peter Valentinovich Multatuli was born in Leningrad on 17 November 1969. He is a Russian journalist, historian and biographer. Multatuli is the author of numerous books and articles about the reign of Emperor Nicholas II. He is the great-grandson of Ivan Kharitonov (1872-1918), who served as the Head Cook of the Imperial family. He followed the tsar and his family into exile, and was murdered along with them in the Ipatiev House on 17th July 1918.

His comprehensive Russian language studies of the life and reign of Emperor Nicholas II are often overlooked or simply ignored by his Western counterparts.

The era of the reign of Emperor Nicholas II (1894–1917) remains one of the most prominent in the history and development of Russia.

Rapid economic development, the strengthening of the state’s defense, peace-loving external initiatives, outstanding scientific discoveries, the successes of public education, advanced social policy for this period — were all achieved in a short historical period. Thanks to the policies and reforms of Nicholas II, sophisticated state administration and the talents of statesmen, helped shape the necessary union which produced such brilliant results.

Please note that this Russian language site is still under development, and once complete will also feature articles, news, and videos.

On a personal note, I would like to add that this new Russian site is of great importance. It allows us to reexamine what we have been led to believe is the truth on the era of Nicholas II, from the many books and documentaries produced over the past fifty years. Many have been written by people who have failed to examine all the facts, especially those from Russian sources.

As an example, during a BBC radio programme Beyond Belief held on 20th August 2018, the programmes’ host Ernie Rea was joined by four guests to discuss Russia’s last emperor and tsar. Among them was Andrew Phillips, Archpriest of the Russian Orthodox Church (ROCOR) and rector of St. John of Shanghai Orthodox Church in Colchester, England, who stated during the programme that “Nicholas II was a reforming tsar”. Fellow panelist and Romanov historian Helen Rappaport did not comment on Father Andrew’s statement, however, she wasted little time in taking to social media to rebuke him. “The assertion by Father Andrew that he [Nicholas II] was a reforming tsar took it too far” – she argued during a discussion on Facebook with her “Romanov circuit”.

I also believe that Nicholas II was a reforming tsar, the information presented in this new Russian site providing the facts. Therefore, I respectfully disagree with Dr. Rappaport’s comments, and her rebuke of Father Andrew’s comment alone raises a red flag.

I have argued for years that researchers need access to new documents discovered in post-Soviet archives in Russia. Perhaps this would help put an end to the obsessive rehashing by Western historians of the tragedies which befell Nicholas II during his reign. It is time to begin focusing on his reforms and achievements. I cannot emphasize enough the importance of an English version of the «Российская империя в эпоху правления императора Николая Второго» web site.