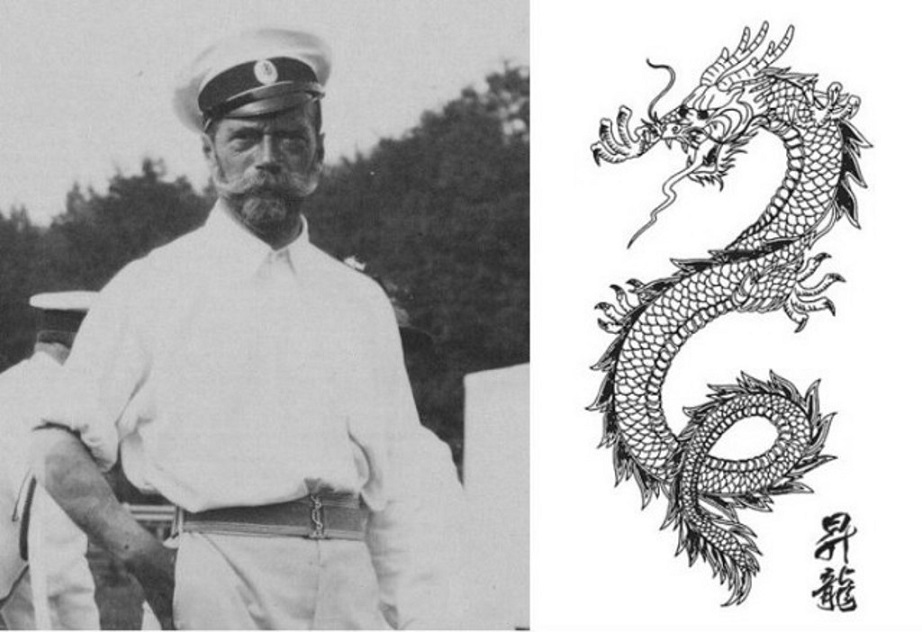 In 1890, the Tsesarevich and Grand Duke Nicholas Alexandrovich (future Tsar Nicholas II), embarked on a 9-month journey on-board the Imperial Russian cruiser Pamyat Azova (Memory of Azov) to the Far East. He travelled through Austria-Hungary, Greece, Egypt, India, Ceylon, Singapore, Siam, China and Japan – the total length of the journey exceeded 51,000 kilometres, including 15,000 km of railway and 22,000 km of sea routes.

It was during his visit to Otsu, Japan, that by Tsuda Sanzō (1855–1891), one of his escorting policemen, who swung at the Tsesarevich’s face with a sabre. Nicholas was left with a 9 centimeter long scar on the right side of his forehead, but his wound was not life-threatening.

Tsesarevich Nicholas showed great interest in Japanese traditional crafts, and in Nagasaki he decided to get himself a tattoo on his right forearm. Local residents were surprised by this, because tattoos were only associated to criminals, or members of the lower classes.

It should be noted, that from the mid-19th century, tattoos had became fashionable among young European and British aristocrats. The first British monarch to be tattooed was Prince Edward, the future king Edward VII, “the Uncle of Europe”. While still an heir, he had a Jerusalem cross tattooed on his chest. His sons followed their father’s example – George (future King George V) and Albert Victor – both of whom had their tattoos in Japan, renown for having the best tattoo artists at the time. 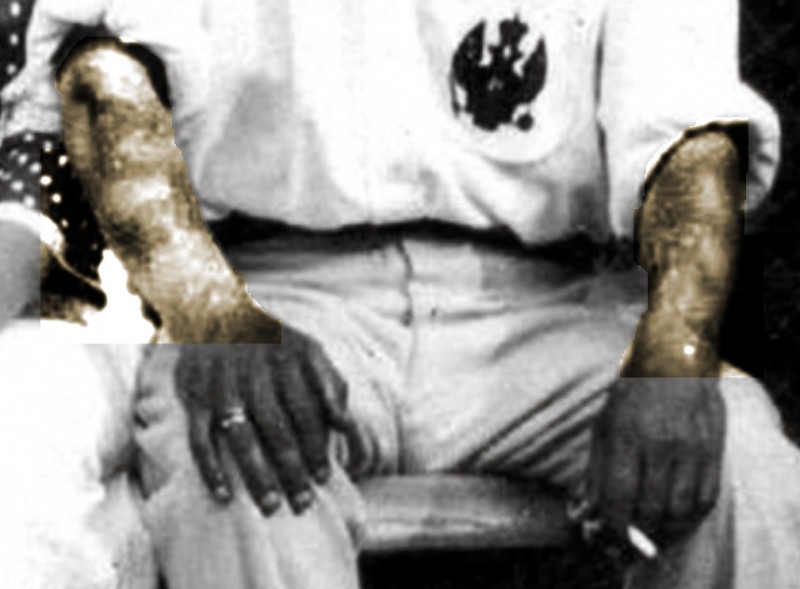 In April 1891, during an official event held in Kyoto headed by Prince Arisugawa Taruhito (1835-1895), that Nicholas made a request to his Japanese host to introduce him to local tattoo artists. The following day, two masters from Nagasaki were brought aboard the flagship of the Russian squadron. One of them tattooed the image of a black dragon with yellow horns, green paws and a red belly, on the Tsesarevich’s right forearm. The painful process lasted seven hours.

A number of photographs exist which clearly show that Nicholas II had indeed had a dragon tattoo on his right forearm. These photos were taken at Livadia, where the tsar loved to play tennis with his daughters and officers of the Imperial yacht Standart.  The above image, however, depicts Nicholas relaxing with his shirt sleeves rolled up revealing a dragon tattoo on each forearm.