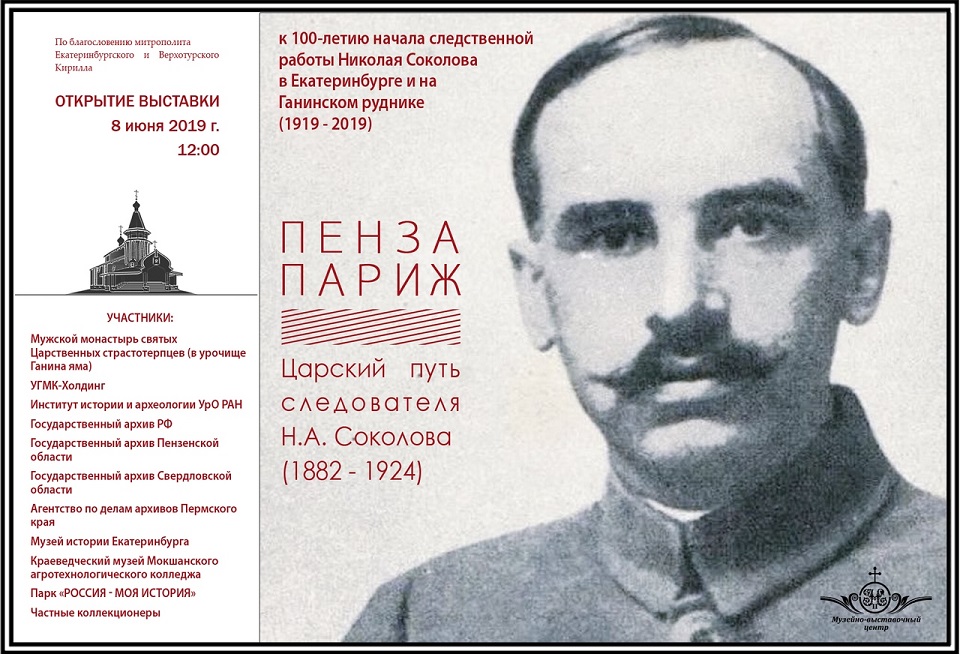 On 8th June 2019, the Metropolitan Kirill of Ekaterinburg and Verkhoturye opened the exhibition Penza – Paris. The Way of the Tsar’s Investigator N.A. Sokolov, in the Museum and Exhibition Center in Ganina Yama.

The exhibition, is timed to the 100th anniversary of the beginning of the work of the investigator Nikolai Alekseevich Sokolov (1882-1924)  in Ekaterinburg and at the Four Brothers mine in 1919.

Metropolitan Kirill reminded guests that the name of N.A. Sokolov is inextricably linked with the Imperial family, since Sokolov was a monarchist, he loved Russia and would not accept the changes brought about by the Bolshevik Revolution in 1917.

Nikolai Sokolov with his wife and daughter Natalia in France, 1920 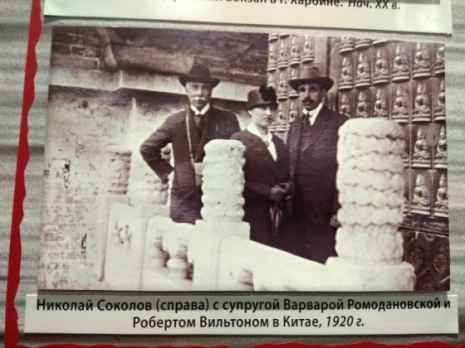 Nikolai Sokolov (right) with his wife of Varvara Romadanovskaya and Robert Wilton Ileft) in China, 1920

Image of the Ipatiev House and other exhibits on display

“Nikolai Alekseevich crossed the front line to reach the troops commanded by General Vasilyevich Kolchak (1874-1920), who was recognised as the “Supreme Leader and Commander-in-Chief of All Russian Land and Sea Forces” by the other leaders of the White movement from 1918 to 1920. Sokolov became one of the closest assistants to the Supreme Commander, who entrusted him with the investigation into the case of the regicide. This year also marks 95 years since the death of investigator Sokolov, a man who made an enormous contribution in gathering evidence about the last days of the Imperial Family in Ekaterinburg,” noted Kirill.

The ruling bishop said that it was NA Sokolov who was the first to follow the path of the cross from the Ipatiev House to Ganina Yama, and it was he who conducted most of the research at the site of the murder and burial of the Holy Royal Passion-bearers.

“We value his sincere work no less than the work of those who remained faithful to the Tsar, his family and and their faithful retainers – Dr. Botkin, cook Kharitonov, maid Demidova and the tsar’s valet Troupe, and all those who wanted to remain with them, but who were separated from the Imperial Family, at Tsarskoye Selo, Tobolsk and Ekaterinburg,” he added.

In conclusion, Metropolitan Kirill thanked the staff of the museum who preserve the memory of the Imperial family.

Visitors to the exhibit can see unique archival materials that give an idea of ​​the difficult task of the investigator. Also presented are rare family photos of N. Sokolov, which are kept by his descendants in France and in Russia. Many of them are displayed for the first time.

The exhibition will be open to visitors until the end of 2019, admission is free.

and HERE to read Nikolai Sokolov: The man who revealed the story of the Romanov killings by Alla Astanina, published on 18 April 2015 on Russia Beyond the Headlines.