In a letter to his mother dated 8th June 1910, Nicholas II reflects his deep concern and anxiety about his wife’s condition . . .

“I am completely run down mentally by worrying over her health.”

Over the past 5 years, I have posted many photos of Empress Alexandra Feodorovna on my personal Facebook page, but I am sadly disheartened by the numerous bitter, nasty comments often left by people. This poor woman has been criticized for everything from “never smiling”, “looking miserable” or depicting a “sour face” – just to name a few.

Just last week I received a nasty email from a Facebook troll who noted how much Alexandra is “hated” by “noted historians”.

During her life, Alexandra carried much grief, worry and sorrow on her shoulders, all of which began at an early age. She lost her brother Friedrich to haemophilia in May 1873; her sister Marie died of diphtheria in November 1878; and the following month, her beloved mother Princess Alice also died of diphtheria in December 1878.

In March 1892, her father Grand Duke Louis IV, died of a heart attack. According to Baroness Sophie Buxhoeveden, Alix regarded the death of her father as perhaps “the greatest sorrow of her life”. Buxhoeveden recalled in her 1928 biography [The Life and Tragedy of Alexandra Feodorovna] that “for years she could not speak of him, and long after when she was in Russia, anything that reminded her of him would bring her to the verge of tears”. This loss was probably so much greater for Alix because Grand Duke Louis IV had been Alix’s only remaining parent since she was six years of age. 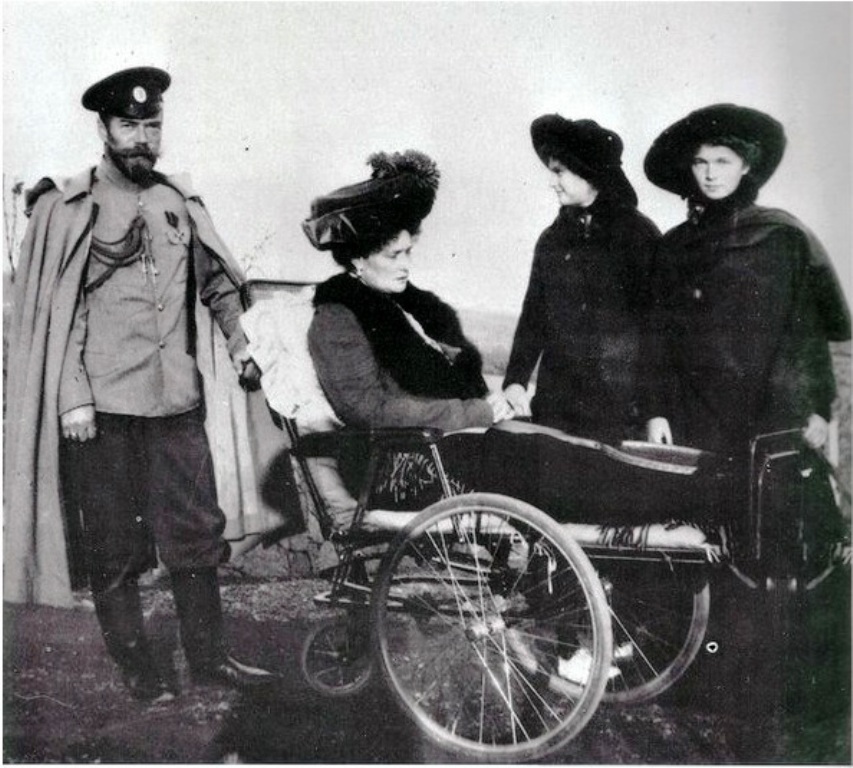 In later years, the Empress’s immobility forced her to use a wheelchair

Alexandra’s health was never robust and her five pregnancies, wreaked havoc on her body. Some historians attribute the semi-invalidism of her later years to nervous exhaustion from obsessive worry over the fragile health of her son. She spent most of her time in bed or reclining on a chaise in her boudoir or on a veranda. This immobility enabled her to avoid the social occasions that she found distasteful. Alexandra regularly took a herbal medicine known as Adonis Vernalis in order to regulate her pulse. She was constantly tired, slept badly, and complained of swollen feet. She ate little, but never lost weight – she had become a vegetarian. She may have suffered from Graves Disease (hyperthyroidism), a condition resulting in high levels of the thyroid hormone, which can also result in atrial fibrillation, poor heartbeat and lack of energy.

After the birth of Alexei, the long awaited heir to the Russian throne, Alexandra felt guilt for having passed haemophilia to her son. Most historians believe that she had a breakdown due to the constant worry for her son’s health, and later perhaps suffered from mental health issues.

From the day which she arrived in St. Petersburg, members of the Imperial Family, along with the ladies of the aristocracy took a particular dislike to Russia’s new Empress. Alexandra was a deeply religious woman, and she took great lengths to keep both herself and later he children at a distance from the debauchery of the capital.

Alexandra was also isolated for being foreign. Increasingly, she became an even more unpopular figure with the Imperial Family, the aristocracy, and the Russian people for numerous reasons, including her association with Rasputin and Anna Vyrubova. During the Great War, she became unpopular because of her German birth and upbringing, when that country was an enemy of the Russian Empire. Alexandra became a primary focus for the increasing unrest associated with opposition to the monarchy.

Whatever her shortcomings as Empress, let us be more careful in the words we choose before we pass judgement on this poor woman.