The following article is just one of many, which reflect my personal interest in Nicholas II. Since the fall of the Soviet Union in 1991, Russia’s reassessment of his life and reign have shifted significantly. The establishment and distribution of orders and medals in his name is just one indication of the positive direction this reassessment is heading, while at the same acknowledging the enormous contribution he made during his 22+ year (1894-1917) reign.

I have known of two of the three orders for some years now, however, it has been an arduous task to find any documents about any of them. Information provided by a phaleristics group in Russia recently, has now allowed me to complete this article.

I would like to point out that I am not an expert on orders and awards, therefore, I am appealing to readers, who may be able to provide me with additional information. I would also appreciate any errors be brought to my attention at the following email:  royalrussia@yahoo.com – PG

After the canonization of the the Sovereign Emperor Nicholas II and his family by the Russian Orthodox Church Outside of Russia (ROCOR) in 1981, two new orders were established simultaneously: “Order of Saint Nicholas II” and “Order of The Holy Passion-bearer Tsar Nicholas”. Both awards are awarded for merits in the revival and advancement of the finest Russian traditions which contribute to the prosperity of the state. Holders of the order include individuals, politicians, scientists, athletes, artists, among others. 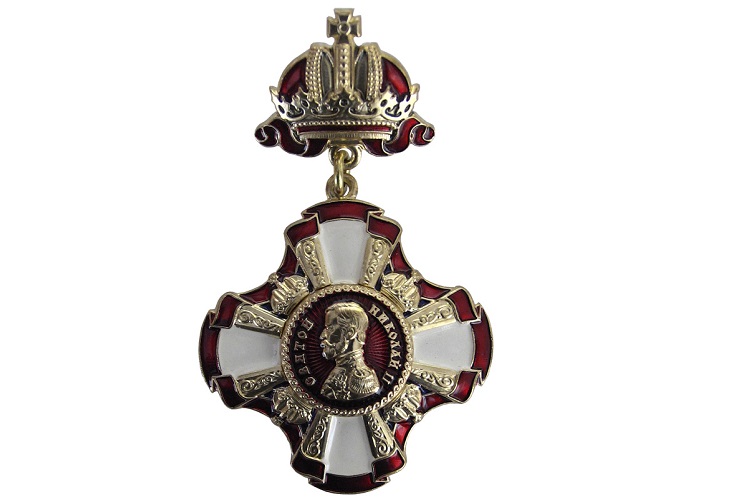 The highest international public award was established in 1988 by the descendants of the Romanov dynasty and the noble family of Dmitrievs, the founders of the Imperial Society of Russia (IOR) charity foundation. The order was was established to mark the 70th anniversary of the murders of the Imperial family in Ekaterinburg. The order is issued on the means and donations of the Board of Trustees. Nominees are approved by the Expert Council of the IOR. Presentation of the laureates is carried out both by state authorities of different levels and by public or business associations. The Order of Saint Nicholas II is presented in a solemn atmosphere, with the involvement of the media and the general public. A number of orders have been issued posthumously. The unique insignia remains in the possession of the recipient for life and can be inherited. 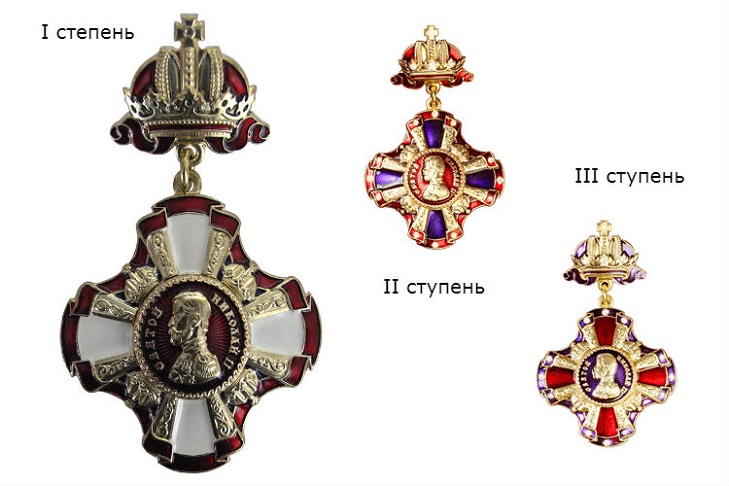 The Order has three degrees, for which the insignia are:

2nd Class: silver, sapphires or aquamarines, blue enamel on the rays of the cross, red framing

3rd Class: Alloy of non-ferrous metals with gilding, rubies or tourmalines, red enamel on the rays of the cross, blue framing

The founder of the Imperial Society of Russia (IOR), hereditary nobleman Valery Dmitriev, the developer and manufacturer of the Heroldmeister Kiev non-state enterprise designed the order. All three Classes represent the so-called Templar Cross, each ray of which is made in the form of three symmetrical folds. The central is covered with enamel, the side ones are made of base metal and decorated with a relief pattern. Between the rays are large imperial crowns inlaid with precious stones. The whole composition is framed with an enamelled ribbon, the color of which depends on the degree of the award.

In the center – a medallion, also trimmed with precious stones along the rim. Inside on an enamel background is a profile portrait of the last Russian tsar and the inscription in a circle: “Saint Nicholas II.” The reverse contains the date of establishment – 1988, the lower beam of the cross is stamped with the serial number of the mark. The pad is a bas-relief image of the imperial crown. The Order is attached to it with the aid of the ear and ring. The size of the cross at the extreme points is 45 mm, the total height of the product is 75 mm. 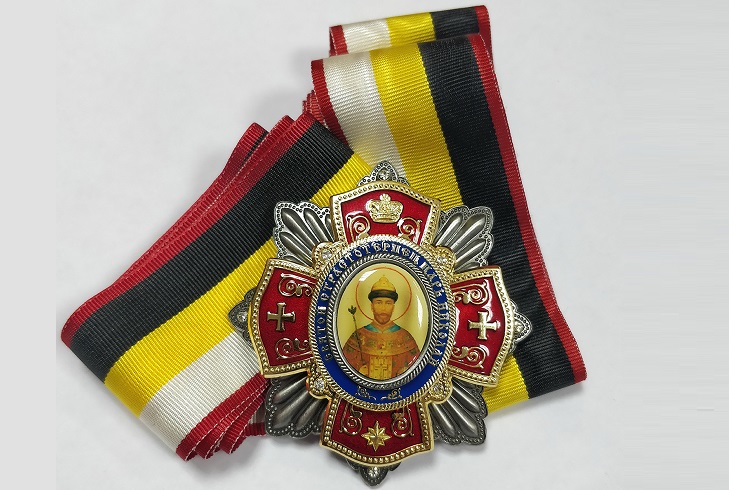 On 19th May 2008, at the initiative of the Russian Orthodox Church Abroad (ROCOR), another order was established, similar to Saint Nicholas II. It received the status of an international religious public award and is awarded to both civilians and the military. The direct founders: the organization Orthodox Mission for the Revival of the Spiritual Values ​​of the Russian People; Orthodox Troop Mission; and the International Award Committee of “Glory to Russia”. The statute of the award states that nominees may be persons whose activities “are aimed at strengthening Russia, the spiritual development of the people, and the protection and preservation of Orthodox values.” Candidates can be nominated to members of the Award Committee, representatives of monarchical organizations in Russia, clergymen of the Russian Orthodox Church Abroad and holders of the Order.

The Order is an eight-pointed silver-plated star, on which is laid a cross, covered with red enamel. On its upper beam is depicted the imperial crown, on the lower is Heaven’s rose, one of the symbols of the Virgin Mary. The right and left sides are decorated with heraldic crosses. In the central part there is an oval medallion trimmed with enamel, inside it there is an image of the Emperor’s canonized face. The inscription on the blue enamel bezel: “Holy Martyr Tsar Nicholas.” The reverse contains the number of the award and the year of establishment “2008”. Medal mount – screw with clip. Holders wear the order on the right side of the chest, below the state awards of the Russian Federation, or around the neck on a ribbon.

Recipients of the Order of The Holy Passion-bearer Tsar Nicholas include:

Bokhanov and Multatuli are recognized as Russia’s leading experts on the life and reign of the Sovereign Emperor Nicholas II.

All three recipients have devoted years of research, writing and public speaking to help clear the name of Russia’s much slandered tsar.

In addition to public awards, there is also a badge honouring the Sovereign Emperor Nicholas II. It is carried out in the form of the St. George Cross, either in form identical to the prototype, or against the background of a four-pointed star. In the center there is a medallion with bearing the tsar’s profile and a circular inscription: “EMPEROR NIKOLAI II RUSSIA”.

The mark is made of brass, the rays of the cross are covered with black enamel. It can be attached to the pentagonal strap with St. George ribbon. In the version with a star, the imperial crown is depicted on the upper beam of the cross, on the lower one – the personal monogram of Nicholas II. In addition to brass, nickel silver alloy is also used.