The following exhibition ran from 14 September to 28 October 2018

Beginning 14th September 2018, the Tretyakov Gallery in Moscow will present unique materials from the archives of the Russian Imperial family. An exhibition of photo documents from the Gallery’s collections will showcase a previously unknown collection of photographs.

The exhibits were sent to the Tretyakov Gallery in 1932 from two former imperial residences: the Gatchina Palace, where the Empress Maria Feodorovna Dowager lived after the death of her husband Alexander III, and the Alexander Palace, the last residence of the family of Emperor Nicholas II.

From the middle of the 19th century, the Imperial families employed the services of court photographers for both official and leisure images, photographing them in the interiors of the Imperial palaces and country residences, at official receptions, on vacations, hunting trips, and other leisure activities. The “Kodak” camera was first used by the Grand Duchess Maria Feodorovna (future Empress Maria Feodorovna) in the 1860s, when she took a great personal interest in photography. Over time, her enthusiasm for photography was taken up by her son Nicholas II and his family. His wife Alexandra Feodorovna are often seen in leisure photographs with the famous Kodak Brownie camera in hand.

Emperor Alexander III with a personal Cossack guard, leaving the station at Brest. 1886

Empress Maria Feodorovna fishing off the deck of the Imperial yacht ‘Tsarevna’, in the Finnish Skerries. 1894

A series of photos from the family album-boxes of Maria Feodorovna are also featured. These charming amateur photographs offer an intimate look at family time together: walks to the Finnish skerries on the Imperial yacht Tsarevna, picnics on the beach, and leisure time onboard the yacht. In the album there are 60 photographs-business cards. A small folding album contains nine photographs of the installation of the monument to Empress Catherine II by the sculptor M.M. Antokolsky in Vilna in 1904.

In the section dedicated to the family of Emperor Nicholas II, photographs include the exteriors and interiors of the Alexander Palace, views of the park and pavilions scattered throughout the parks in Tsarskoye Selo, as well as photos from “Yacht Zarnitsa” album.

These historic photo chronicles are represented mainly by beautifully bound albums, some of which are interesting examples of arts and crafts of the turn of the century. These albums were produced in a single copy, using precious metals on the occasion of significant events for the members of the imperial family.

Emperor Nicholas II and his family on the deck of the Imperial yacht ‘Standart’. 1910

Grand Duchesses Tatiana, Anastasia and Mari, with an unknown officer at the Alma station, on the way to Crimea. 1914 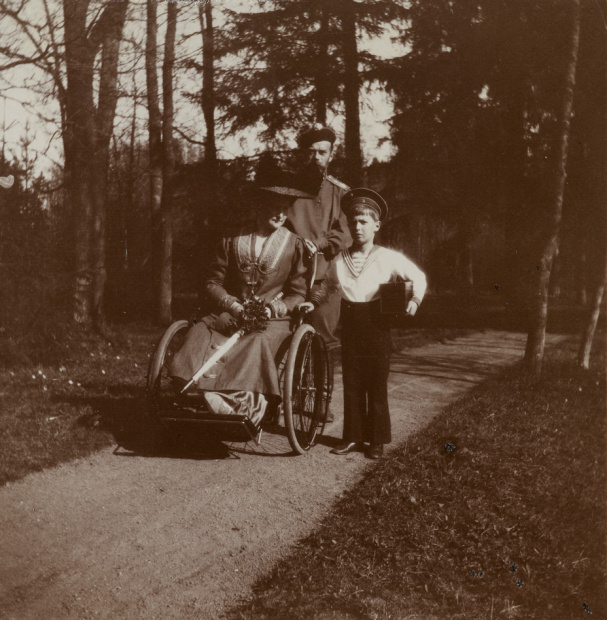 The album “Medzhybozh” was presented to Grand Duchess Olga Alexandrovna, chief of the 12th Hussar Akhtyrsky Regiment, on the occasion of her visit to the headquarters in the Medzhibozh Castle on 11th December 1908. The album includes 30 photos documenting the anniversary visit: the chief of the regiment enters the castle, the review of the regiment, the squadron’s songwriters, the hunting team, a group of regimental officers among others.

The photo album, which belonged to the heir Tsesarevich Alexei Nikolaevich, contains 289 small-format photographs from 1909-1914, which depict trips made by the imperial family to Germany, the Finnish skerries and Crimea, and onboard the Imperial yacht Standart, among others.

The exposition also includes a unique series of 40 photos received as a gift in 2004, dedicated to the first official visit of Emperor Nicholas II, Empress Alexandra Feodorovna and Grand Duchess Olga Nikolaevna to France in 1896.

During the preparation of the exhibition, the staff of the scientific and reference department of photo-materials of the Tretyakov Gallery conducted research work to determine the names of the photographers and unknown persons in the photographs, dates and places. The results of the work are included in an exhibition catalogue published in the Russian language only.