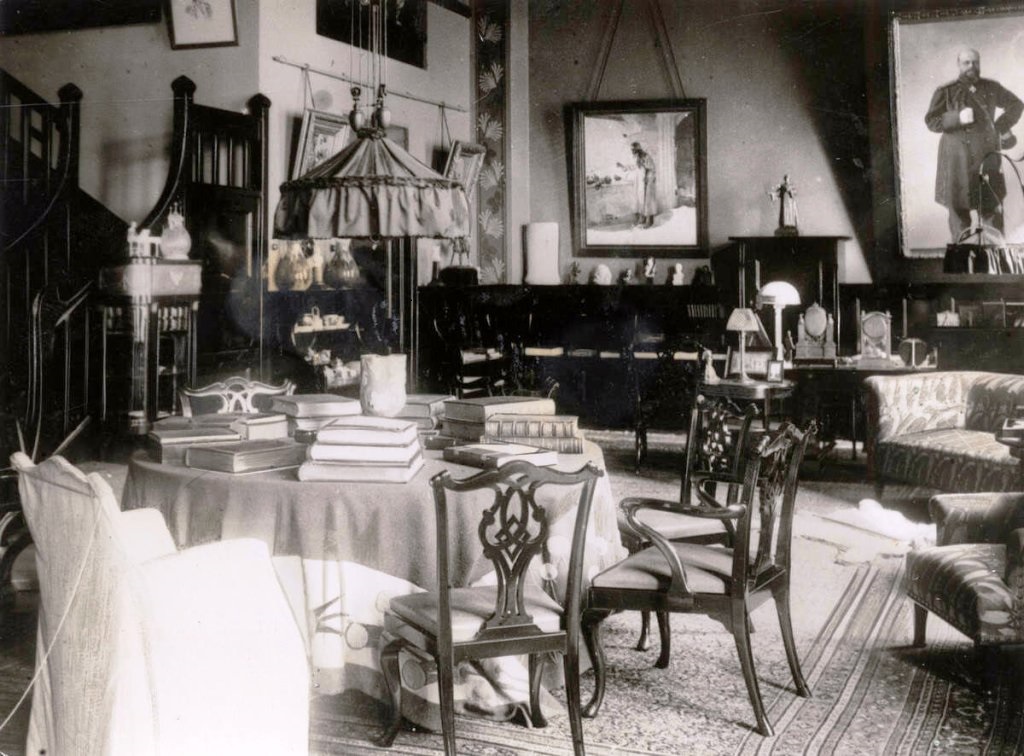 PHOTO: view of the New Study of Nicholas II, as it looked in 1917

In 1902–1904, Roman Feodorovich Meltser’s (1860-1943) firm carried out the construction, decoration and furnishing of the New Study of Emperor Nicholas II in the Alexander Palace. The work had to be carried out according to precise calculations and drawings, which were submitted for consideration by the Technical Committee organized under the Cabinet of His Imperial Majesty.

The emperor’s spacious four-window study had a mezzanine with marble columns, made by the German company Duckerhoff & Neumann (Nassau, Rhineland-Palatinate, Germany), which was connected to the mezzanine of the Maple Drawing Room on the opposite side of the eastern wing of the palace. The interior was heated by fireplaces ordered from Vienna. Several types of electric lamps were specially made to illuminate the office, based on the best technological achievements of Russian scientists Alexander Ladygin and Werner von Bolton, as well as the developments of General Electric. Meltzer decorated the lamps with Tiffany style shades with variegated glass. These cylindrical coloured glass “tulip lanterns” have not survived, but are clearly visible in historic photographs, which will allow restorers to recreate them exactly to their original.

PHOTO: view of the staircase leading to the mezzanine, which connected the New Study of
Nicholas II with the Maple Drawing Room, as it looked in 1917 (above); and in 1944 (below) 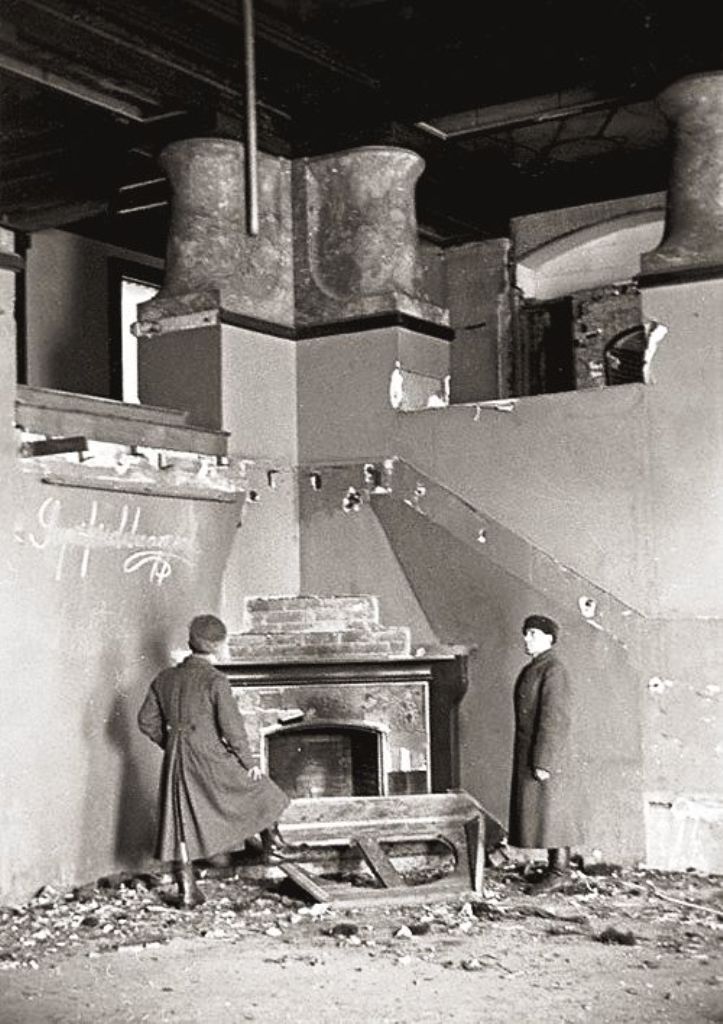 The ceiling in the Emperor’s study was made of mahogany, including the trim. The walls were painted with a deep blue-green mastic paint and stencilled with ornamental friezes around the tile cladding above the fireplace and a niche behind the table. The walls of the mezzanine were painted in light yellow tones with the same stencil ornament.

An important decorative element of the decoration of the rooms of the Alexander Palace during the late 19th to early 20th centuries, including the New Study were the beautiful oriental carpets. The New Study of Nicholas II, was decorated with large Persian carpets, on top of a seamed crimson carpet.

A pool table occupied the space along the northern wall of the New Study, with a fireplace decorated with blue relief tiles. The pool table was made according to Russian standards, developed and produced by the St. Petersburg manufacturer Adolf Freiberg. A large corner sofa was placed next to the table.

Near the opposite wall was a large desk with an upper shelf and an attached electric lamp on a block. The desk, was covered with many family photographs, writing instruments and other accessories and small memorabilia. Near the window on a high mahogany curb stone stood a plaster bust of Emperor Alexander II by the Italian sculptor Pietro Canonica (1869-1959). It is known that Canonica made a modified bronze copy of the sculpture, which was approved by Nicholas II. A copy of this bust is preserved in the collection of the Museum of Pietro Canonica in Rome, therefore, it will be possible to recreate the lost sculpture based on a historical analogue.

In the central part of the New Study was a large round table, armchairs and chairs, a soft sofa and an armchair with an oval tea table between them. The table, armchair and chair have been preserved and are today in the collection of the Pavlovsk Museum-Reserve. The first meeting in the New Study is noted in the diary of Nicholas II on 3rd May 1903.

The New Study of Nicholas II was filled with works of Danish and Russian porcelain, family photographs, books, and memorabilia. In the bookcases, in addition to works on history, politics and religion, there were the collected works of Shakespeare and Tennyson, works of Byron, Merimee, Gaultier, Hugo, Tolstoy, Chekhov, Merezhkovsky among many others.

The New Study is one of the few interiors of the Alexander Palace, the decoration of which partially survived the Great Patriotic War of 1941-45: the ceiling lining with brass overlays, a mahogany door, two fireplaces, and columns on the mezzanine have all been preserved. 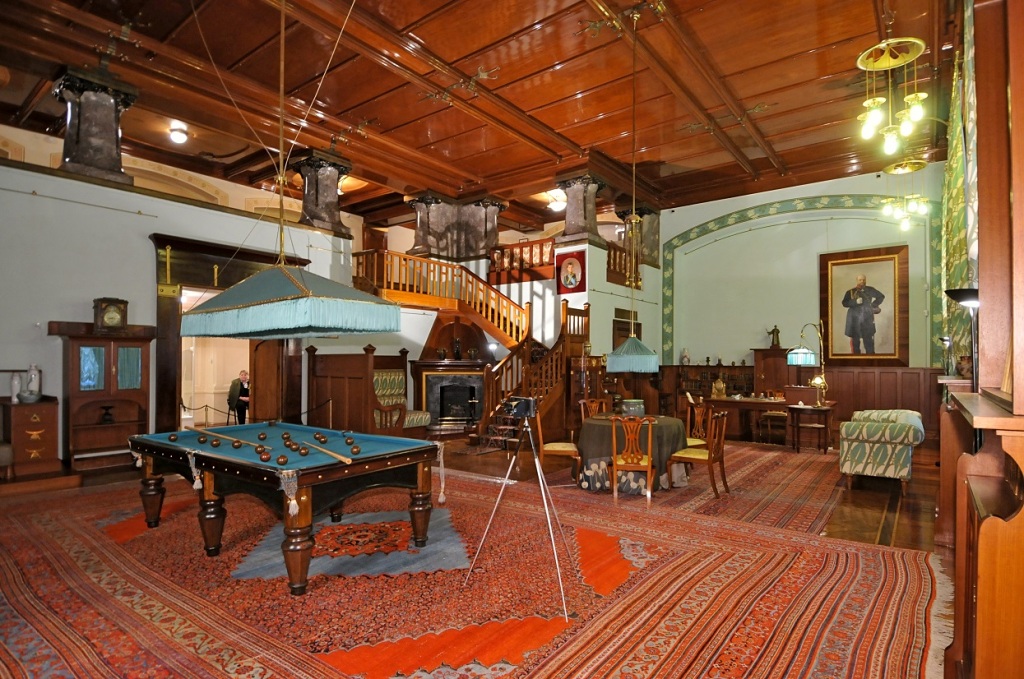 The interior of the New Study of Emperor Nicholas II was partially restored in 1997 for the opening of the Memories in the Alexander Palace exhibition. Several years later, the interior decoration was reconstructed, which included built-in wardrobes, sofas, chairs, a desk, lighting fixtures, draperies on the windows, made from photographs of the 1930s and inventory drawings of the Tsarskoye Selo Artistic and Historical Commission of 1918. These items were made in 2000 for the filming of Gleb Panfilov’s film The Romanovs. Crowned Family.

The current restoration of the interior began in 2015. In 2019, restorers discovered the original color and a fragment of the stencil painting that framed the fireplace portal, which made it possible to restore the historic color of the cabinet walls. The discovery of surviving samples of English tiles made it possible to recreate the cladding of the fireplace inserts and fireplaces.

PHOTO: the restored fireplace in the New Study (above); and a detail of the tile (below) 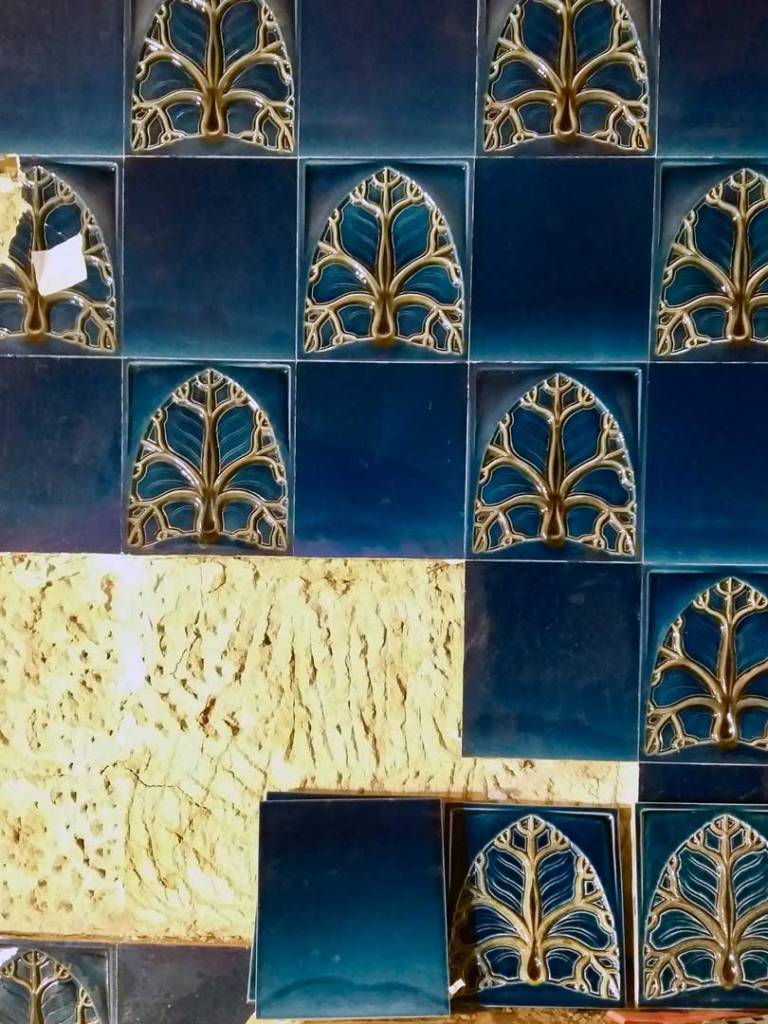 Furniture lost during the war will be recreated for the New Study. A corner sofa for the billiard table has already been made, a display cabinet, bookcases, wall sconces with Tiffany lanterns and other lighting fixtures are being recreated; work is underway to restore the writing table and billiards, matched by analogy. One future project, is a plan to restore the window frames with cathedral (stained-glass) glass based on information from archival sources.

The Russian company “Tissura” together with the Swiss company Fabric Frontlain, have recreated the silk fabric decorated with hyacinths for the window decoration based on historical samples preserved in the Collection of the Tsarskoye Selo State Museum. The window curtains will be made by the St. Petersburg firm “Le Lux”.

PHOTO: the current look of the restored New Study of Emperor Nicholas II 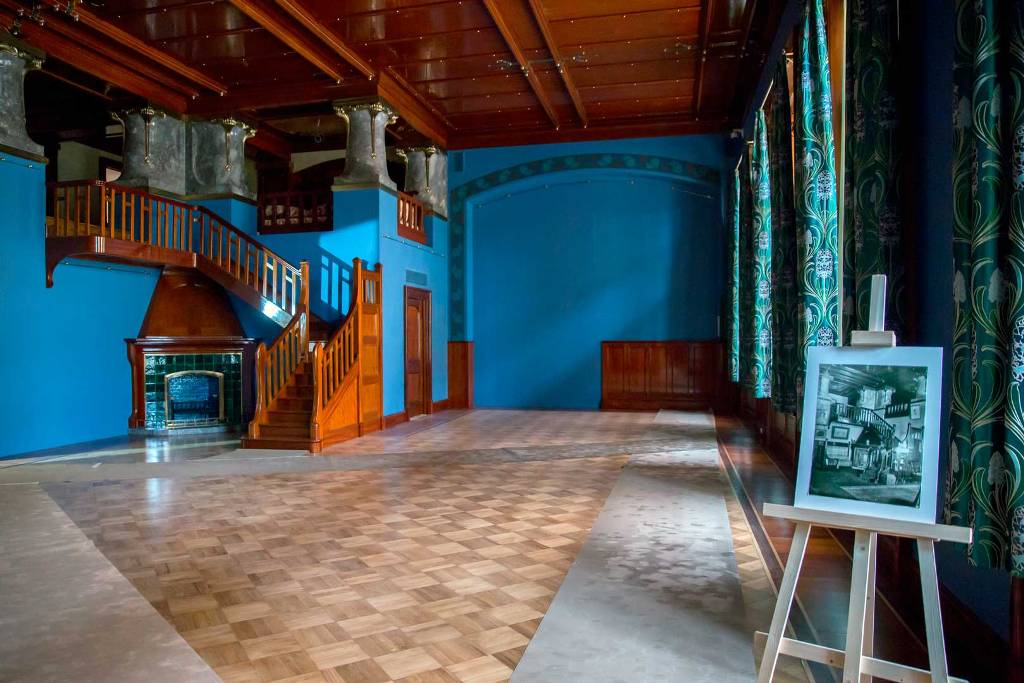 Specialists from the Studio 44 architectural bureau, will soon begin work on the reconstruction of the lost pieces of furniture and lighting fixtures for the New Study.

Paintings, porcelain, and interior sculptures which have been preserved in the Pavlovsk State Museum-Reserve, will be returned to the Alexander Palace. Among them – paintings, sculptures, busts, Danish porcelain, etc. Following the completion of the restoration of the New Study, these items will be returned to their historical places in the Alexander Palace.

Dear Reader: If you enjoy my articles on the history and restoration of the Alexander Palace, then please help support my research by making a donation in US or Canadian dollars to my project The Truth About Nicholas II – please note that donations can be made by GoFundMe, PayPal, credit card, personal check or money order. The net proceeds help fund my work, including research, translations, etc. Thank you for your consideration – PG