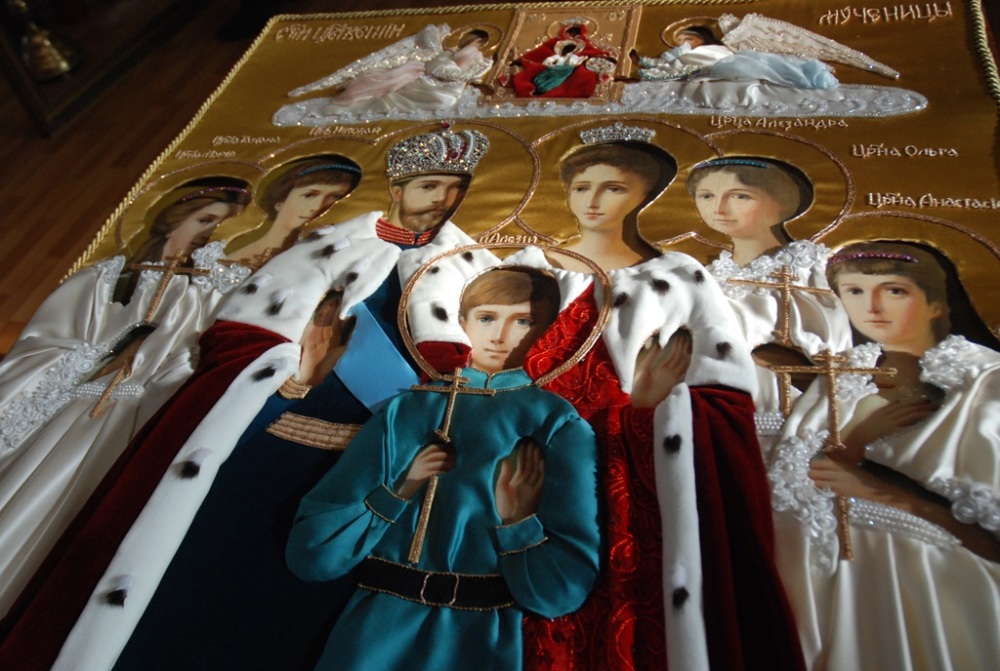 Icon of the Holy Royal Martyrs, Church of the Holy Blessed Prince Alexander Nevsky in Tula.

Earlier this year, a unique icon of the Holy Royal Martyrs was presented to the Church of the Holy Blessed Prince Alexander Nevsky in Tula. The top layer of the icon was gifted by local needlewomen, who spent many months sewing it together.

According to Irina Alekseevna Vishnevskaya, the head of the needle circle, more than thirty women worked on the image of the Royal Family from the beginning of last summer. Another participant of the circle, Irina Sergeyevna Romanova, noted that pebbles from the basement of the Ipatiev house in Ekaterinburg, and from the mining pit at Ganina Yama were sewn into the icon.

Depicted in their royal robes, the women took great care to ensure accuracy, right down to the smallest detail in the colourful vestments. As you can see in the video (below), the top layer of the icon was laid on top of the wooden icon depicting the images of the Holy Royal Martyrs. The two layers of the icon were joined together by ribbons, mounted in a wooden frame and hung on the side of a pillar within the church.

On Sunday 23rd February, the icon was consecrated by the rector of the church, Archpriest Victor Ryabovol, followed by a prayer to the Holy Royal Martyrs.

CLICK on the VIDEO below to watch the consecration of the icon performed in the Church of the Holy Blessed Prince Alexander Nevsky in Tula: